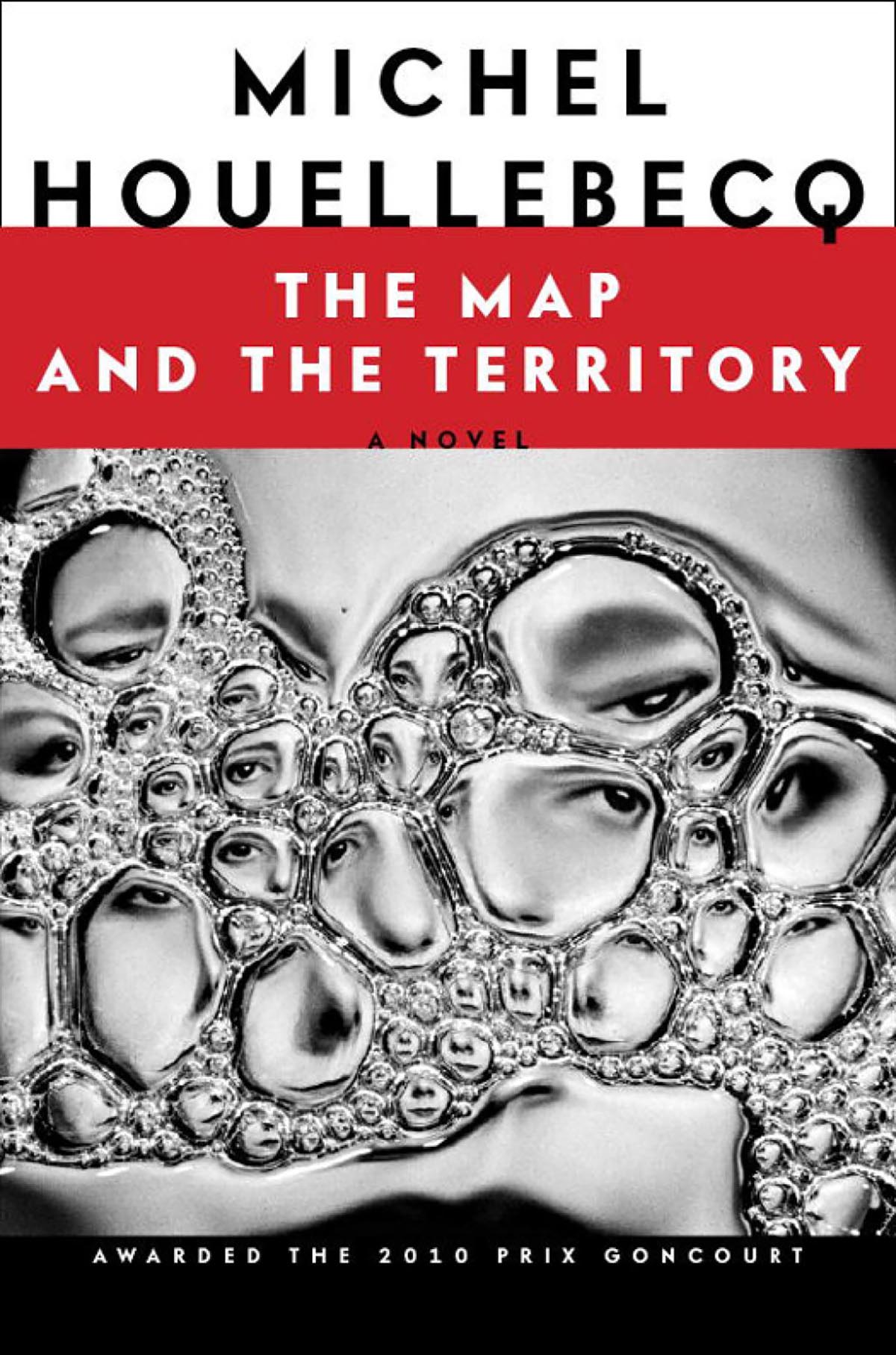 The Map and the Territory begins with the composition of a painting, but it’s truer to say it emerges from out of the painting—or out of its description. A little more than a paragraph in, the fiction of the scene yields: “They could have been in Qatar, or Dubai; the decoration of the room was, in reality, inspired by an advertisement photograph, taken from a German luxury publication, of the Emirates Palace Hotel in Abu Dhabi.” An investigation of the interior leads to a revelation about the exterior. It’s a small turn in the sea of them that we find in Michel Houellebecq’s new novel, but it’s one that deserves our attention. As readers, it’s the first sign of our conditioning to a world where reality is the continuity or discontinuity between texts. This particular text, a painting called Damien Hirst and Jeff Koons Dividing Up the Art Market, depicts what it says. If the irony of the conceit isn’t lost on us, the passing affinity Houellebecq himself has with Hirst’s epithet isn’t either: “Hirst was basically easy to capture: you could make him brutal, cynical in an ‘I shit on you from the top of my pile of cash’ kind of way; you could also make him a rebel artist (but rich all the same) pursuing an anguished work on death…” The painting itself suggests an analogy to its over-text, to the parallel aesthetics—classical and iconoclastic, conservative and decadent—at work in The Map and the Territory. Houellebecq’s protagonist, Jed Martin, is painting the ersatz mythology of the world of art in the time of hyper-capitalism; his two contemporaries are symbolic, godlike, free as representations to take refuge in a kind of essential commercialism through the rite that the sale of this painting would renew. But the latter will never come to pass: “On closer inspection, the night itself wasn’t right: it didn’t have that sumptuousness, that mystery one associates with nights on the Arabian Peninsula; he should have used a deep blue, not ultramarine. He was making a truly shitty painting. He seized a palette knife, cut open Damien Hirst’s eye, and forced the gash wider; it was a canvas of tight linen fibers, and therefore very tough.” This time the path from interior to exterior leads through an act of violence that renders the boundary between the two meaningless.

From here on out, it’s violence that prevails. The Map and the Territory is bound by a singular act of violence, but there’s a sense that it’s part of a continuum—an acute variation on the slow, spectral decomposition that inhabits the novel’s every facet. The novel roughly tracks Jed’s evolving career as a visual artist, but a good deal of attention is paid to his relationship with his father, an architect who retires and then falls ill. Houellebecq deals for the most part in neuroses, but here especially Jed’s self-absorption actually belies an unconscious sentimentality: “For the time being, he chewed laboriously on his suckling pig, with about the same expression as if it were a piece of rubber; nothing indicated that he wanted to break the lengthening silence, and Jed, being nervous…looked frenetically for some subject that might lend itself to conversation.” Jed’s anxiety during their holidays together evokes the melancholy between two loved ones that have gradually become strangers Nearing the end of his life, his father confesses his own youthful—defiantly artistic, even utopian—architectural ambitions in a long and hypnotized monologue. He disappears soon afterwards, as though grafted onto the text. If the novel has a climax, it’s the search that leads Jed to a Swiss suicide clinic. Houellebecq’s prose is uniformly dry, and his existentialism often feels casual and affected, but that scene has a passion and an anguish that largely eludes the rest of the novel.

But what feels affected elsewhere has a purpose. The Map and the Territory is a conceptual novel, and a perceived ambivalence regarding certain conventional elements is an integral aspect of its concept. Houellebecq’s terse, minimalist prose, his eccentric humor, and his utter deadpan destabilize the seriousness of his intellectual project, leaving some of his most interesting passages hanging in the balance between put-on and aesthetic gambit. Consider an excerpt from Jed’s extended reflection on his new Lexus: “This car was the first one he’d bought since reaching a new wealthy status; from his first visit to the dealer, he’d been seduced by the rigor and precision of the metal assemblages, the gentle click of the doors when he closed them, all that was machine-tooled like a safe.” In one sense, this is simple affect: a move to express contentment with a manufactured product veers into fetishization—in a word, a joke. In another, it’s a criticism: The artist’s fascination with industrial products will inevitably find itself reflected in the artist’s own work. This has already been established with Jed, whose early works were photographs of pieces of industrial machinery, and who broke through to commercial success with photographs of Michelin maps. But Houellebecq has also considered how this fascination is reflected in his own work, in the novel, that high-watermark of bourgeois representation, with its own unique division of labor. Perhaps this is why The Map and the Territory is so skeletal when it comes to plot, why so little energy is spent giving characters depth, and why Jed’s only romantic relationship unravels with so little resistance: “Olga was nice, she was nice and loving, Olga loved him, he repeated to himself with a growing sadness as he also realized that nothing would ever happen between them again…” No drama, no romance, only pathos and amorphous longing. There’s something undeniably human about the disinterest Jed seems to show even in living out his own story, and something truer still about the friction between a plausible human life and an artist’s fabrication: “Jed devoted his life (or at least his professional life, which quite quickly became the whole of his life) to art, to the production of representations of the world, in which people were never meant to live.” If this is Houellebecq’s own confession, perhaps the character he writes for himself is his measure of penance.

Houellebecq the character, distinct from Houellebecq the historical person (who has, among other things, won the Prix Goncourt—the French equivalent of the Pulitzer—for The Map and the Territory), first appears when Jed asks him to write the introduction to his second exhibition’s catalog. He’s about as sullen and as cryptic as we’d expect, and moreover shares Jed’s enthusiasm to fanatical degree: “I’ve known three perfect products: Paraboot walking boots, the Canon Libris laptop-printer combination, and the Camel Legend parka. I loved those products, with a passion; I would’ve spent my life in their presence, buying regularly, with natural wastage, identical products. A perfect and faithful relationship had been established, making me a happy consumer.” There is a trace of mysticism here, a lingering connection to the cult of the artisan that feels humorous and desperate by turns. “It’s true, I feel only a faint sense of solidarity with the human species…” he continues, “I would say that my feeling of belonging diminishes a little more each day.” Jed is drawn to the misanthropic novelist, sensing in him a kindred spirit—this is natural, of course, as Jed was only a proxy for the author anyway, and when Jed offers a portrait of Houellebecq as payment for the introduction, The Map and the Territory looks ready to take on a supreme neatness.

That is until shortly after receiving his payment, when Houellebecq is ripped to shreds by a home invader. The final third of the novel is a detective story—arguably the most frequently invoked mode of storytelling in modern fiction, literature’s “perfect product”—and it’s happily the most indulgent. Houellebecq seems to relish his own erasure, letting on that his killer tore him to ribbons and sprayed blood on the carpet to mimic Pollock’s drip paintings. Inspector Jasselin, the lead investigator, is a far cry from the traditional hard-boiled detective; in his brisk introduction we learn that he’s infertile, and that his bichon (also infertile) is a sort of surrogate child for he and his wife. What’s more, he doesn’t solve the murder. It’s only after his retirement that the solitary break in the case—the missing painting—pays off for blind luck. One by one Houellebecq dismantles the defining elements of the policier genre, and rewires its logic. Ideologically, the detective’s role is to bring the moral code to bear on those that lived outside that code, essentially to reaffirm the mythology is reaffirmed for you, the reader. The detective novel is the commoditization of that mythology; in purchasing and reading the novel, the mythology is reaffirmed for you. Houellebecq interrupts this affirmation and suggests that the code of exchange—not the relation of mythology, but the relation of commerce, in which readers actually participate when they buy The Map and the Territory—is the one that prevails. Jasselin’s realization is one and the same with Houellebecq’s confession: “At the start, this case seemed particularly atrocious, but original. You could imagine you were dealing with a crime of passion, a fit of religious madness, various things. It was quite depressing to fall back in the end on the most widespread, universal criminal motivation: money.” Appropriately, Houellebecq requests that his headstone be adorned with an engraving of a Möbius strip.

It can be difficult to enjoy The Map and the Territory at such moments. A proud heart beats at this novel’s center, and often it’s difficult to blame, but its objectives are personal, and unsympathetic readers will find it difficult to love. It’s certainly easy to admire. Its resolution is a kind of attenuated apocalypse, speaking as it does from a future where Jed Martin’s major scholars are Chinese, and industrial period-tourism is the lifeblood of Europe. Clearly the West is in decline, but Houellebecq wants to make a different point. Jed’s final productive period, at the end of his life, is as a filmmaker, shooting abstract video collages of artificial decomposition over time, first with photographs, then with figurines: “The figurines were more resilient, and in order to accelerate their decomposition, he had to use again his carboys of acid.” His vision—at its inception slightly hokey or even shallow—seems to have finally aligned with his that of his author, exuding the menace and the inevitability that simmered in the first canvas when it was destroyed, or in Houellebecq’s spattered blood; that waits in the fragile beauty of a civilization whose end is always over the horizon.

A banner at Jed’s first solo exhibition reads: “THE MAP IS MORE INTERESTING THAN THE TERRITORY”—paraphrasing Alfred Korzybski assertion that “The map is not the territory.” The map that Houellebecq provides is an open one, leading us through different territories, different versions of itself—never the destination, only the way.

Michel Houellebecq’s a href=”https://www.amazon.com/dp/0307701557/ref=nosim/?tag=slantmagazine-20″ target=”_blank” rel=”noopener noreferrer”>The Map and the Territory is available now from Knopf.

With Year of the Monkey, Patti Smith Spins Dreams Into Topsy-Turvy Words 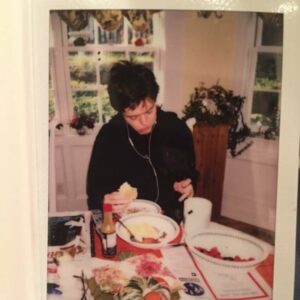 Ryan Meehan's writing has appeared in The Brooklyn Rail, Vice, and The Notebook. He lives in Brooklyn.

A War-Time Fever Dream: Ramona Ausubel’s No One Is Here Except All of Us