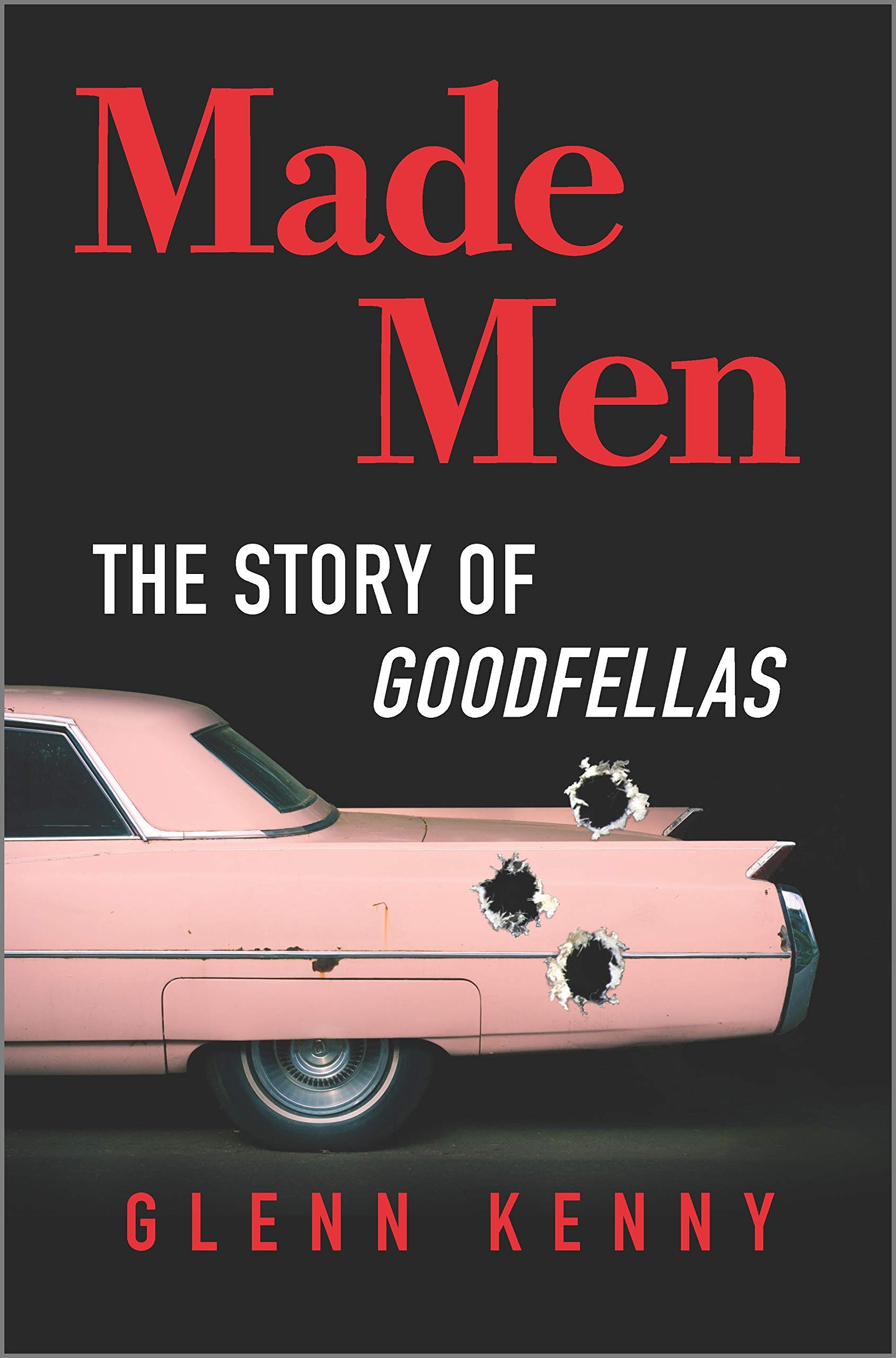 The challenge of critiquing art is to effectively render its soul to the reader, through a discussion of aesthetics and the culture that informed it. This isn’t an easy task, especially on a week-by-week, deadline-driven basis, which begets generalizations and perpetuations of myths, particularly when the artists in question are legends.

Martin Scorsese’s Goodfellas, for one, has been analyzed to death, and its reviews often center on the film’s virtuosic camera movements, violence, blasts of rock music, and debates as to whether Scorsese condones the outlandish and barbaric behavior of his characters. These reductions have led to the film’s mischaracterization, in certain circles, as a “bro” movie—a masturbatory ode to guy’s behaving badly. Thankfully, critic Glenn Kenny’s extraordinary Made Men: The Story of Goodfellas offers a great deal more nuance than that on the film’s 30th anniversary.

As in his prior Anatomy of an Actor: Robert De Niro, Kenny displays a shrewd grasp of detail here. He doesn’t reduce Scorsese, De Niro, actor Joe Pesci, producer Barbara De Fina, Wiseguy author Nicholas Pileggi, real-life prosecutor Ed McDonald, and the various real-life mobsters that appeared in Goodfellas to the status of legend-hood. Rather, he portrays them as gifted, tormented human beings, centering on their professional processes.

Along the way, Kenny foregrounds an oft-neglected element of Goodfellas’s greatness: its microscopic, docudramatic sense of atmosphere and character behavior. Anyone who understands that Scorsese is more than a wham-bam director of gangster dramas knows that Goodfellas has as much in common with the filmmaker’s 1974 documentary Italianamerican as it does with his 1973 breakout feature Mean Streets. Kenny certainly grasps this relationship, and he offers many anecdotes pertaining to the selection of props, the fine-tuning of sets, line deliveries, and camera movements, and the many other ways in which Scorsese and his collaborators invested the narrative with the texture of everyday life.

Goodfellas is based on the life of Queens gangster Henry Hill, who, as the film states at the end, went into witness protection as his cohorts were killing each other to protect themselves from prosecution for various crimes, most spectacularly the Lufthansa heist, in which over five million dollars was lifted from J.F.K. Airport on December 11, 1978. Honoring fact as well as fiction, Kenny mounts an ambitious mixture of cinephilic essay and true-crime exposé.

Made Men has a fluid, intuitive structure that recalls, yes, Goodfellas, as Kenny merges an intricate analysis of the production with off-kilter anecdotes about Hill and the gangsters in his and the film’s orbit. One tracking shot near the start of Goodfellas that takes viewers through the Bamboo Lounge, introducing Hill’s unofficial “family,” features real-life dirty cops, mobsters, and enforcers, all of whom Kenny sketches in quickly and vividly. McDonald, who participated in this book and played himself in Scorsese’s mob epic, arises as a notably memorable voice, a take-no-shit veteran who nevertheless remembers the violent, alcoholic, yet self-preservingly charming Hill with affection.

Kenny’s painstakingly reveals the rich, bottomless precision of Goodfellas. In Pileggi’s Wiseguy, Hill says that his future wife, Karen (played in the film by Lorraine Bracco), had eyes like Liz Taylor’s, or so people said. In the film, Henry says that he thinks she has eyes like Liz’s, which suggests that the movie-drunk Scorsese couldn’t bear to deny his character such an opinion, or awareness. The sociopathic Tommy (played here by Pesci) makes a reference to The Oklahoma Kid that’s complemented by Kenny with a description of Lloyd Bacon’s 1939 film and an analysis of what Tommy misremembers about it. Such episodes reveal how artists merge themselves with material, even if they didn’t generate it.

As Scorsese has said in the past, his depiction of Hill’s life was informed by his childhood experience of watching gangsters’ activities in Little Italy, and this curiosity—and perhaps yearning for power—is the ultimate source of the film’s obsessiveness and controversy. Kenny spoke with Scorsese and Pileggi for Made Men, among many other of the film’s collaborators, and Pileggi says that he and the filmmaker took separate shots at streamlining Wiseguy into a script and uncannily opted to cut the same portions. Pileggi’s rise from an anonymous writer to a beloved source of gangland gossip is documented in the book as well; for one, he used to frequent a mafia restaurant that even adopted some of his family’s recipes.

At a trim 379 pages, Made Men feels astonishingly completist. Kenny has read Hill’s various cookbooks and watched other movies, now mostly forgotten, about the Lufthansa heist. Included in the book is the recipe for the sauce that Henry makes for his brother during the film’s frenzied final act, which Kenny says is great if you can handle the meat sweats. After a 150-page passage that takes Goodfellas apart scene by scene, breaking down its rhythms, revealing it to be simultaneously expressionist and objective in its approach, Kenny springs an analysis of every song used on the soundtrack, detailing which portions are heard and the histories of every one and what they reveal about a vast intersection between cultures. It’s a mind-blowing music seminar compressed to less than 30 pages.

“…when Goodfellas brings up the [Sid] Vicious “My Way” it is one of those moments you wish you could experience unspoiled over and over again. It’s a shock, because Scorsese, while certainly a rock-n-roll person, is not (his fondness for the Clash notwithstanding) a punk person so there’s some surprise that he pulled it out. But it’s one of those things that feels so right—the tossing of this self-aggrandizing procession into the trash. Anka is right—Vicious is sincere, in a sense. When he sings, “Regrets, I’ve had a few/but then again/too few too mention,” he means it, man (as his Sex Pistols bandmate John Lydon/Johnny Rotten would put it), but he divests the words of the pompous solemnity Sinatra’s version relies on. Burn it all down. Throw the egg noodles and ketchup at the wall. Fuck it.

Passages like this one refute the impression that Scorsese’s condoning his characters—an idea that Kenny detonates throughout Made Men. Time and again, Kenny underscores the venality of these characters, which Scorsese emphasizes again and again in the film, and which led to test audiences being disgusted with Goodfellas ahead of its release. The film, like Scorsese’s The Wolf of Wall Street, confuses people who feel comfortable being preached to, and who mistake the exhilaration of aesthetic with a jubilation for the characters. Scorsese dramatizes his and, by extension, our craving for power, gratifying our fantasies of reach and influence, and then upsets expectations by pitilessly showing the cost of such entitlement, as in the gruesome murder of Billy Batts in Goodfellas or the brief, jolting shot of a suicide in The Wolf of Wall Street, moments that are both prominently featured in Kenny’s book.

Like other films that have been misread as merely and emptily overwhelming audiences with vicarious thrills, such as Oliver Stone’s Wall Street, Goodfellas is powerfully glamorous. It represents a former nerd’s (Scorsese’s) attainment of sensuality and power via the fashioning of a ferocious stream-of-conscious tabloid rock-star style—a director-as-star gesture that has been aped endlessly for three decades. The film is a significant, troubling work of art in part because Scorsese is willing to indulge and examine his own unsavory idolizations; his dream to be a “player,” per this book, is inseparable from the on-screen Hill’s striving for the same.

Frank Vincent’s Billy is brutally murdered in the film, but the disposal of his body is shrouded in a car’s rearview lights, which suggests, as Kenny states, the lighting of an Italian horror film. Which is to say that even the ugliest sequences in the film are beautiful and kinetic. Kenny doesn’t entirely grapple with this contradiction, though he brings Goodfellas down to Earth with his own unforgettable rendering of Hill as an over-the-hill schemer. No one else has seen this magnificent, agonizing, unmooring movie with such piercing clarity.

Made Men: The Story of Goodfellas is available September 15 from Hanover Square Press.

Review: Bestiary Poetically Raises a Coming-of-Age Tale to the Level of Myth

The Appointment Is a Bitterly Comic Unburdening of a Conscience