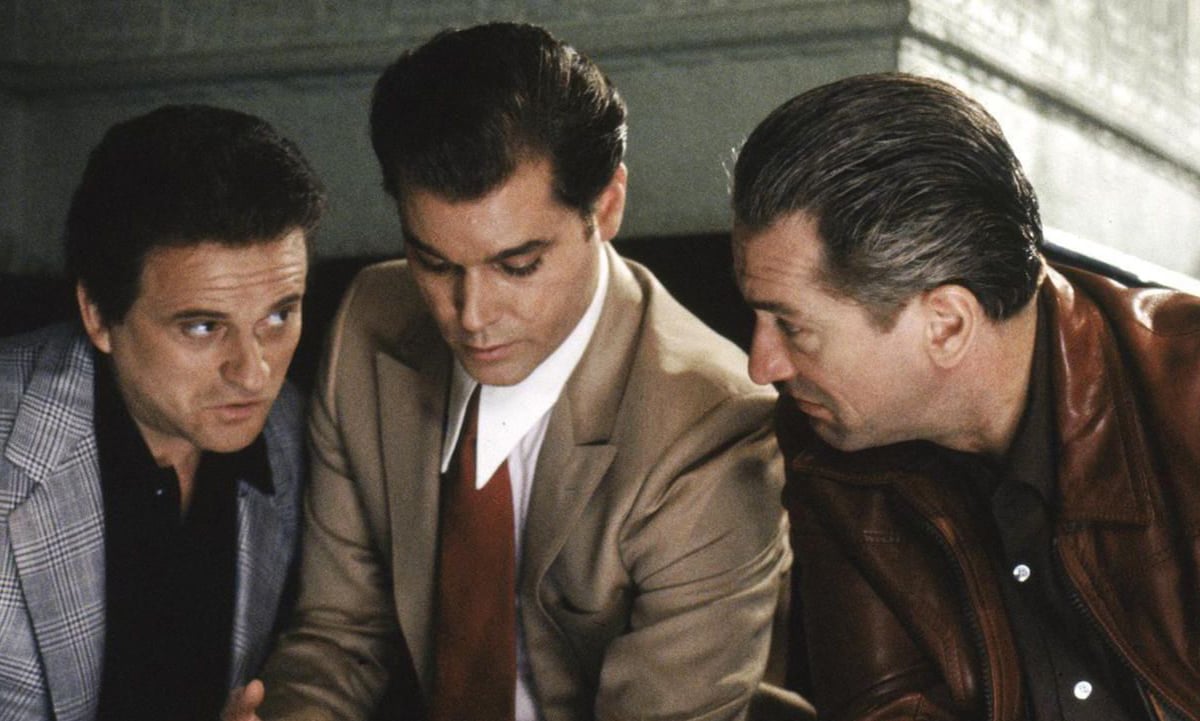 As a visual stylist, Martin Scorsese is at once an impressionist and expressionist. His bold, old-school use of color and lighting turns the world around his characters into reflections of their personalities, his active, perspective-locked camera movements and editing schemes placing the lens completely within the point of view of his protagonists. In Goodfellas, the director immediately jumps into the nostalgic recollections of Henry Hill (Ray Liotta), a low-level mobster in a small New York neighborhood who nonetheless felt like he lived on top of the world. Overlit flashbacks of Henry’s youth spent running errands for local gangsters present the wiseguy’s turf as the boy sees it: all gleaming Cadillac chrome and folded $100 bills that seem to spring out of the very ground where criminals walk. As a man, Henry feels no less awestruck by the power afforded to him by the Family, with the areas he frequents for work and relaxation regularly lit through bronze and red filters that stress at once the history of order and hierarchy that keeps the mafia composed and the wellsprings of passion and fury that wiseguys typically unleash on anyone who crosses them.

Scorsese’s camera, backed by Nicholas Pileggi’s episodic script, never lingers too long on any of Henry’s memories. As such, the film initially rides high on Henry’s fond recollections of big scores and unpunished violence. When, for example, Henry helps his friends Tommy (Joe Pesci) and Jimmy (Robert De Niro) kill one of their old rivals, Scorsese and editor Thelma Schoonmaker favor low-angle shots of the men kicking their prostrate target, using split-second glimpses of his increasingly bloodied face as a cathartic punctuation. They’re pitiless shots, for Henry feels no pity toward the man. Gradually, however, the repetitiveness of the sequences can’t be ignored, but Scorsese uses that repetition to thematic effect, emphasizing the lack of power these egotistical men truly wield within the organization. Henry may have more money than he can spend, but that’s a testament to his unimaginative consumerist desires, not his placement among the Lucchese elite. Even the film’s most spectacular visual achievement, that long take that winds through the Copacabana as Henry woos his girlfriend, Karen (Lorraine Bracco), uses the rigid formalism required of any extended take to communicate how banal and unspontaneous Henry’s power truly is. The camera movement and the obsequiousness shown to Henry create the illusion of total access, but in the end the man is just worming his way through bustling kitchens to get a front-row seat to watch Henny Youngman, a once-revered comic now used as a shorthand for hacky punchline humor.

The spectacular visual style masks the banality of what it documents, an approach mirrored in the acting. De Niro’s naturally laconic delivery and body language codes Jimmy as a shrewd planner and man of few words, but even when he pulls off one of the largest heists in U.S. history, Jimmy never rises above the bottom rung of the mob ladder. Liotta clues in on the nostalgia in the real Hill’s feelings for his old life and adds a childish streak to his portrayal of Henry, a petulance that undermines his sense of self-confidence. Pesci epitomizes the film, regularly exploding in mushroom clouds of expletives and finding the mordant humor in unchecked psychopathy. But he also plays Tommy like a former high school football star in middle age, someone who never made anything of his life, but believes himself to still be the center of the world.

Even Bracco gets a chance to join in the frenzy. Actresses in Scorsese films tend to get stuck in the role of the tut-tutting conscience struggling to make itself heard over the din of the guys. But if Karen is the film’s heart, then she only proves that the movie doesn’t have one. She falls in love with Henry when he viciously beats a neighbor who sexually assaulted her, and Henry’s opulent lifestyle clearly attracts her. One of the most memorable close-ups in the film is the punch-drunk euphoria in her slack face at her wedding, as happy to enter into this world as Henry was as a child. In her own way, Karen matches her husband’s hypocrisy and shifting priorities, initially balking at the tackiness of other mob wives only to eventually preside over the gaudiest house in creation, decorated with loud wallpaper, bars behind fake walls, and enough gold plating to fill a casino lobby.

Bracco plays Karen with a nervousness that the woman can’t hide, but in reality she’s no more paranoid or scared than the men in her life. A recurring tic of the film is a keen focus on eyes and glances. As Henry sinks into coke-addled depravity, his sallow eyes start to move back and forth metronomically as they scan for threats, be they his disapproving captains or F.B.I. helicopters. But even the ranking members of the Lucchese family behave like caged animals. Paul Sorvino gives the closest thing the movie has to a naturalistic performance as the neighborhood boss Paulie; befitting a man who only answers to people the average wiseguy never even sees in a lifetime, Paulie only moves and speaks when he pleases, and only to those he deems worthy. Yet as Scorsese’s camera bobs between the meaningful stares and nods that Paulie sends out to inferiors via a gestural relay, it betrays the boss’s fear of being caught saying anything incriminating, indeed anything at all. Scorsese broke out with street crime movies that critiqued their protagonists while indulging in their vices, yet it’s Goodfellas, the most vicariously thrilling of the lot, that ultimately presents the soberest vision of how hollow (and short) these fast lives really are.