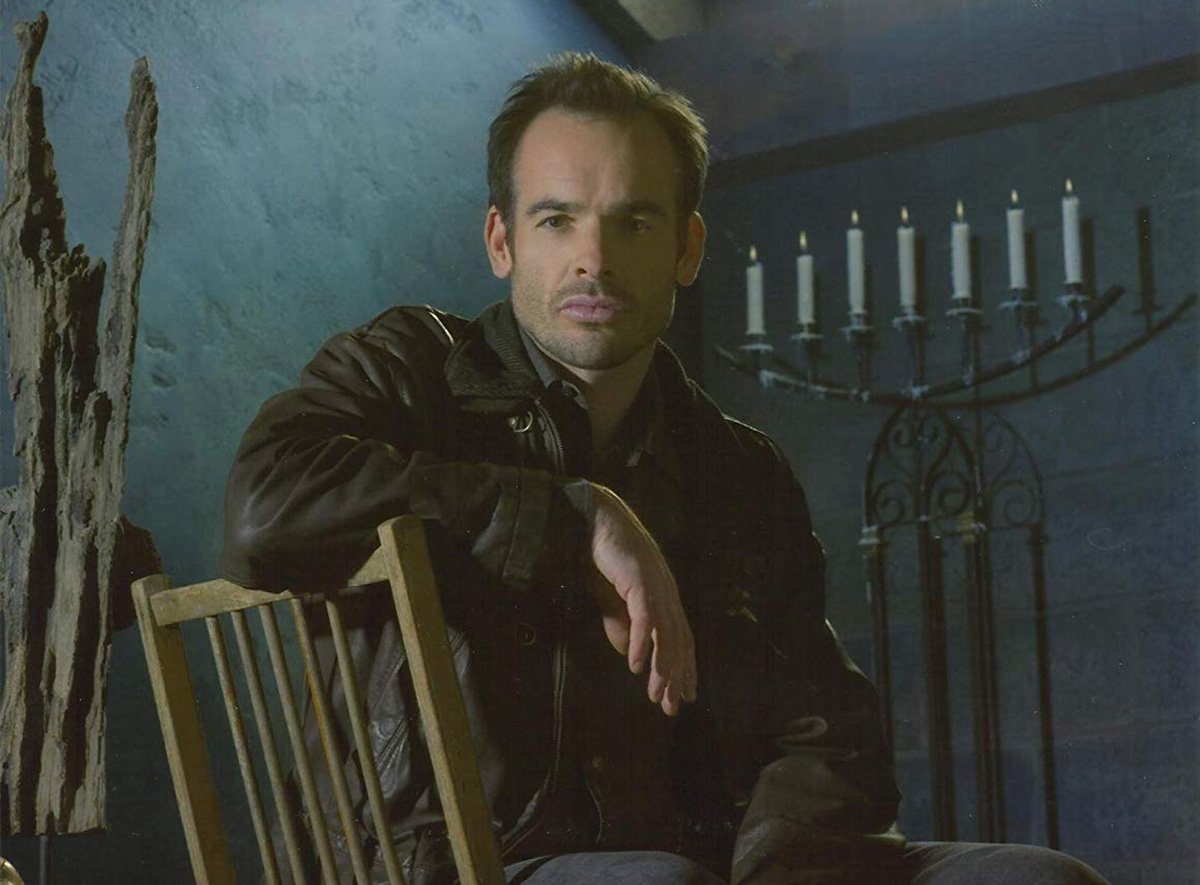 Do you remember all those times when you thought you saw something but didn’t? Or heard a noise that nobody else heard? Dogs barking at something you can’t see? A feeling of dread, impending danger—and you can’t explain it?

Those are Harry Dresden’s specialty—he’s a wizard and he can help you.

SciFi Channel’s The Dresden Files (Sundays at 10/9C) is based on author Jim Butcher’s series of novels starring Harry Dresden—Private Investigator and contemporary Chicago’s only openly practicing Wizard. Using his brains, friends and no small amount of magic, Dresden is the classic detective novel hero who constantly gets mere humans in and out of trouble by getting himself in and out of trouble.

Jim Butcher has crafted an extensive universe for his novels that is believable and complex. Butcher borrowed from all traditions in constructing his Dresden universe. There are Celtic, Catholic, Christian and Pagan creatures of myth and magic (ghouls, zombies, fairies, necromancers, etc.) plus other critters of occult origin (three types of vampires, Knights of The Cross, pixies, fairies and ethereal spirits) appearing and disappearing on a regular basis. It is incredibly broad while at the same time intensely personal as Dresden moves through time, space and the Nevernever (Land of Fairie), finding answers and engaging those who would prey on mere mortals.

The novel’s Harry Dresden is presented as the classic noir hero—flawed, not above resorting to unusual and occasionally unethical methods to achieve his objectives which are, at their base level, pure of heart; your basic good guy doing what needs doing to make things right. He is alone in his belief that Wizards should be open and help rather than work behind the veil of magic as the White Council demands. In addition, Dresden is involved in a war between the Courts of Fairie as his—wait for it—Fairie Godmother, a high-ranking member of the Fairie Winter Court, is trying to keep the Summer/Winter war from spilling over into the mortal world.

The transition from richly detailed novel form to 40-minute TV show has been difficult. While Butcher has been involved in the scripting and development process, there has been some re-imagining which isn’t entirely positive. It’s one thing to take the basics and manipulate them for time and money purposes and another to screw up the whole idea for the same reasons. Fans of the novel series should be confused (as I was) because it’s not the same Dresden. Butcher claims he likes the changes, but I can’t bring myself to believe that because most of the best elements of the novels are missing. Then again, if somebody waved a couple of hundred grand in my face for rights to a novel of mine, I might think differently if only because if it’s screwed up nobody will ever remember it.

The successful re-imagining of Battlestar Galactica used the original series characters and basic storylines and twisted them around to make something new. This new Galactica was familiar to fans of the original series as the producers and writers kept the basic bible of characters and storylines while making wholesale changes that made sense. Doctor Who has been doing the same thing since it began. The producers and writers of Dresden Files seemingly ignored these object lessons and started with a whole new Dresden for no apparent reason.

A second problem is a sense of continuity confusion. SciFi juggled with the presentation schedule in the same manner as Fox did with Firefly, which was a disaster. The premiere episode that did a little backstory on Dresden was placed 8th in the schedule (”Storm Front”, which was also the first novel title). “What about Bob?” the 4th episode was moved to 10th. They started with “Birds of A Feather” (Episode 3) in which some of the explanatory information in “Storm Front” was missing. There were elements of backstory that showed up in “Birds of A Feather” that even had me wondering because they were not connected to anything—they were just left out there waving in the breeze. I knew what was what but the uninitiated viewers would have given up without a fight. An example of this was the sudden presence of Morgan in “Birds of A Feather”. Morgan (Conrad Coates) is the Captain of the Wardens—the police arm of the White Council. Novel readers would know who Morgan was—a novice viewer wouldn’t (or couldn’t) because that was explained in “Storm Front”.

The rich and detailed background for Harry is gone and replaced with simple expedience. For example, Dresden is presented on a single plane—which is to say that the ingredients of the Nevernever and his novel support cast have disappeared. The complexity of his ongoing battle with his own dark past and his ongoing conflict with the White Council is a major part of the novel Dresden’s life and are given short shrift within the TV plots. The novels are also full of intrigue between the various Vampire Courts and the White Council, plus the politics of the Fairie Courts—the back-stories are just as important as the mystery presented in the novel. Other missing characters not to be found in the TV incarnation are Mouse, his monster mystical dog from Tibet (no joke), and Mister, who is occasionally used as Bob the Skull’s ethereal spirit taxicab.

A lot of the more comfortable surroundings of the novel’s Dresden are also missing. The Wizardly accouterments have been tinkered with in a way that seem oddly out of place. An example is Harry’s wand – a drummer’s stick. And Harry’s staff has been changed to a hockey stick, which kind of makes Dresden look like a cheapskate—no pun intended. TV’s Dresden comes across as your everyday kind of guy working the Chicago stockyards instead of a smart, scholarly guy trying to make a living as an actual Wizard. Little things that a novel fan would have expected are also changed. Harry’s protective pendant, a present from his Mother, was changed to a protective bracelet; his beloved “Blue Beetle” is now a Jeep; the basement lab in his apartment is now a backroom in his office. Gone also is Harry’s faithful duster, which has built in protection against some magic. This missing duster also conveniently hides his .44 revolver and shotgun, which are useful when out of other options or having to deal with mortals.

However, all is not lost to the Dresden fan. Paul Blackthorne does his best as Harry Dresden given what he has to work with. One of the novel’s chief concepts is that Harry has a strong sense of humor and complete lack of pretentiousness—something that Blackthorne pulls off quite well. The wit is dry, quick and presented in a classic off-hand manner that novel fans know well. A true gem is Terrence Mann as Bob the Skull. Mann perfectly fits the role of this ancient sorcerer, convicted of necromancy, his spirit imprisoned in his own mortal skull. The cultured accent combined with the modern look come across very well and it would suit the novels if Butcher wanted to use that aspect of the translation.

My personal observation is that SciFi jumped into the series without proper viewer preparation. The Dresden Files would have worked much better if they had done as they did with Galactica—a good solid two hours of telling Harry’s back story, introducing the characters, throwing in a few of Harry’s more interesting novel cohorts, thus generating buzz and creating interest in the show. It’s not like there isn’t a market for this type of mystical/magical series when you think of the various fantasy sword and sorcery movies and novels that have done well.

In the final analysis, The Dresden Files should be considered on its own merits as interesting TV. Even with the FUBAR’d schedule, the episodes have been well crafted and the acting has been more than acceptable. Assuming that SciFi programmers and producers knew what they had with Dresden, and hadn’t messed with the schedule for whatever strange and perverse reasoning they had, I could see a good size audience for Dresden Files.

Update: Talk about proving a point. I just finished watching “What about Bob?” (Episode 10 which was supposed to be either Episode Three or Four) and it is classic Dresden. It should have remained at the beginning of the run in it’s original placement as it explained a lot about Harry’s family, his current situation, Murphy’s role in Harry’s life and Bob’s background. If it had been properly placed, the rest of the series would have snapped into place and the standalone Dresden episodes would have made much more sense to the viewers not familiar with Dresden.