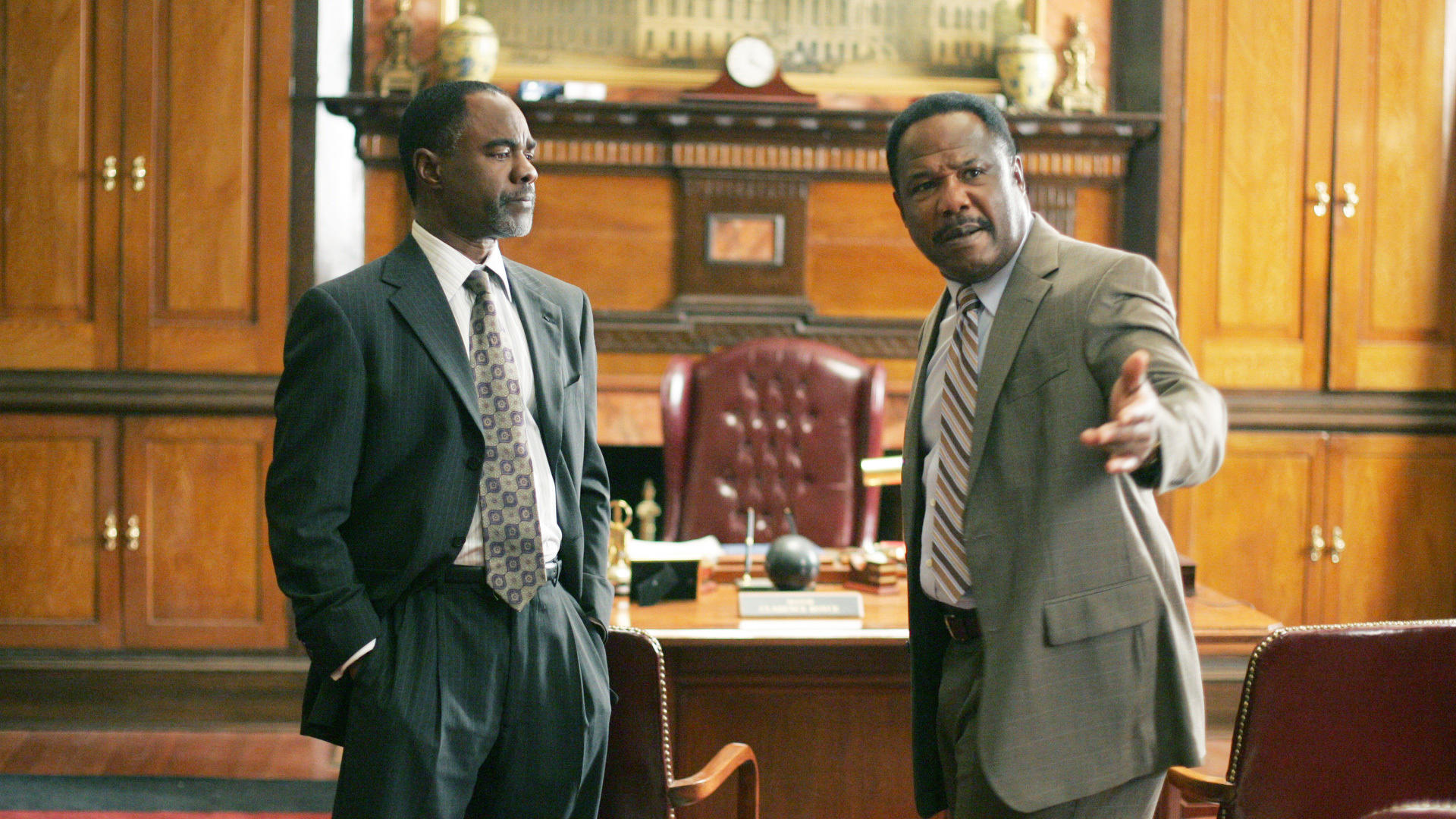 Dennis “Cutty” Wise (Chad L. Coleman) is out of prison, getting paid, jogging down the street with Curtis Mayfield’s “Move On Up” throbbing on the headphones, nobody chasing him, out among the other citizens on Election Day (“Into the steeple/Of beautiful people/Where there’s only one kind”). The picture of freedom, he’s just skipped out on a fine lady’s morning plea to come back (“Take nothing less/Not even second best”). He’s doing his thing, teaching his beloved boxing at his own gym (“Remember your dream/Is your only scheme/So keep on pushing”). Then he slows to a walk near a polling place, takes his headphones off, and gets a two-fisted reminder that the taste of freedom is an illusion. He calls out to one of his boxers, who went AWOL from the gym last month, as the boy, Spider, hands out election fliers. Spider (Edward Green) spots Cutty coming his way and bolts in the other direction, his face creased with disgust. Cutty’s serial sexual conquests, among them Spider’s mom, come with a cost, in this case the respect of a prized student. An overeager campaign volunteer creeps up on Cutty’s disconcertment and forces him to admit that, as a convicted felon, he can’t vote. The music now barely audible from the headphones, his reverie turned to menace, Cutty snarls, “Move on, man.”

In the episode’s opening scene, Rev. Franklin (Rev. Frank M. Reid) refers to the vote as “our blessed franchise,” but hardly anyone on The Wire, from the corner kids to the politicians themselves, reveres the sanctity of the democratic process. Two days before the decisive mayoral primary, the campaign machine of Baltimore’s Mayor Royce (Glynn Turman) papers the battleground precincts with a Photoshopped image of his top opponent defending a notorious slumlord, knowing that word-of-mouth trumps the establishment channels in the black neighborhoods. Elsewhere, Detective Edward Norris (Ed Norris) rushes to complete a politically sensitive murder investigation involving a witness in order to “cause a major shit stink” for one or another of the mayoral candidates. His partner, Detective Kima Greggs (Sonja Sohn), asks his preference for which way the damage falls. “I don’t give a shit either way. I don’t even vote,” Norris admits with glee. “But it’d be fun to fuck with them downtown suits.” On Election Day, Councilman Tommy Carcetti (Aidan Gillen) pounds the pavement on his home turf, where an old man (Jack Seeley) who claims to have known Carcetti’s father assures him of his vote for mayor. “(We) expect politicians to steal,” he concedes to a dismayed Carcetti, but implores him to “leave something for the city” by stealing one dollar out of three and not two. And in perhaps the most honest response to the election circus, eighth-grader Michael (Tristan Wilds) refuses easy money hanging campaign fliers on the grounds that “It’s bullshit, man.”

Those who grasp the personal consequences of the election, though, play the angles with greater care. Deputy of Operations Rawls (John Doman) knows a resolution of the murdered witness case will tip the mayoral election according to its findings. Seeing his chance to make commissioner of the police department at the mercy of whoever is mayor, Rawls instructs Sgt. Jay Landsman (Delaney Williams) to stall the investigation until after the primary to avoid raising the ire of either potential victor. Rawls makes Landsman detail Norris and Greggs to uniform election duty, with an orientation session the day before. Rawls paints the corners of his plan while flipping through one of Landsman’s ever-present skin magazines, a closeted gay man burnishing his personal myth with an improvisational flourish. Rawls then hands back the magazine and brags facetiously, “American democracy—let’s show those Third World fucks how it’s done.”

Carcetti seems nearly alone in his outward embrace of politics as public service (discounting, of course, the implicit self-interest of running for mayor in the first place). When Carcetti’s deputy campaign manager, Norman (Reg E. Cathey), consummates a deal wherein State Senator Clay Davis (Isiah Whitlock Jr.), one of Mayor Royce’s closest political allies, promises to lay off his usual Election Day to and fro on behalf of the mayor in exchange for a large cash donation up front to his campaign committee, Carcetti grapples with the nature of the trade, stating, “Well, I’m not promising him anything, policy-wise.” Norman laughs at his naïveté. “You think Clay Davis gives a fuck about policy?” Later, they see Davis live on the local news, grinning hand-in-hand with Royce; the next time they see him, Davis is shaking hands at Carcetti’s victory party, reconciling his treachery by telling a befuddled Carcetti, “I coulda had you for twice as much.”

Davis’s ongoing fealty to corner kid logic parallels the Election Day shenanigans of a group of eighth graders hired to hang campaign fliers door-to-door. When they learn partway through the job that one of the boys, Randy (Maestro Harrell), already has the money for the work in hand, the rest of them insist on splitting up the money and going to get something to eat. When Randy objects, Donut (Nathan Corbett) demands an explanation. “Fool, if the motherfucker paid you out already, then why the hell are we still here?”

Their pal, Namond Brice (Julito McCullum), isn’t available for the group effort, as he is back on the corner, moving a package on the instruction of his mother, De’Londa (Sandi McCree), a return precipitated by a family meeting with Brianna Barksdale, the matriarch of the Barksdale drug regime for which Namond’s father, Wee-Bey (Hassan Johnson), went to prison. With Avon Barksdale in jail and Stringer Bell dead, Brianna sits atop the defunct organization, all alone amidst her overstuffed furniture. At the meeting, Brianna (Michael Hyatt, who manages to imbue the character with both a stately solemnity and a crackling intensity in each of her rare scenes) informs De’Londa, to her bitter disbelief, that the Brices will no longer receive the monthly stipend meant to ensure Wee-Bey’s silence, coldly justifying, “Ain’t nothing last forever.” The two women hold diametrically opposite views of what the drug trade means to their respective families. Brianna’s son, D’Angelo, was killed in prison by her own people on the fear he might spill the family secrets, his murder framed as a suicide and deemed insufficiently important to warrant a credible investigation. While Brianna intentionally obfuscates her reasons for the abrupt termination of the Brices’ allowance, surely one of them is the sour notion that she is supporting another family while hers lies in ruins. De’Londa, on the other hand, considers the business the only way to move forward. Having burned through all the Barksdale hush money on gaudy furnishings and Artis Gilmore throwback jerseys, she sits Namond down and preaches that it’s time for him to “step up [and] be the man of the family.” To this end, she drops him off at the corner of a drug-dealing family friend with the admonition, “Make me proud, hear?”

While Namond’s mom is pushing him into the streets, Randy’s is reeling him in. “Please don’t call my foster mother” is Randy’s refrain whenever Assistant Principal Donnelly (Tootsie Duvall) has him in the crosshairs and picks up the phone, a plea he complements with a little insider snitching. His fear of Miss Anna (Denise Hart) learning of his latest jackpot (busted as paid lookout for a bathroom quickie) leads him to offer a last-ditch litany of trade-bait, each offense more serious than the last, until he practically whispers, “I know about a murder.” Though Randy has Miss Anna sitting on one shoulder, he keeps doing things that will set her off. When he rounds up the crew to start the flier job, Donut naturally suggests the work would go a lot quicker with a borrowed vehicle. Randy flares with paranoia, invoking Miss Anna’s name, but in their next appearance, they’re all casually rolling out of an SUV, with Randy grabbing the campaign paraphernalia and leaving the backdoor wide open.

Randy’s math teacher, Roland “Prez” Pryzbylewski (Jim True-Frost), steps in to shepherd Randy through the witness gauntlet and protect him from the attendant notoriety. A former cop, he brings the issue to his former boss, Maj. Cedric Daniels (Lance Reddick), who finds Prez’s earnestness curious. “What’s this kid to you?” he asks. It’s a fair question: as with Cutty and his young boxers, Prez is attempting to forge mentorships with boys who have no reason trust him. The relationships feel forced, like the men don’t trust themselves and are trying to prove something in the face of reminders of their past failures. For Prez, these include an incident in season one when he pistol-whipped a young boy about Randy’s age during a beer-and-peer-fueled power trip at a public housing project. The boy lost an eye, a transgression for which Prez never forgave himself, as evidenced by his inability to look at the boy when the two randomly crossed paths some weeks later. Now unstrapped from his instruments of destruction, Prez knows he can be more to these kids than he was to the one he blinded, and maybe more to himself in the bargain.