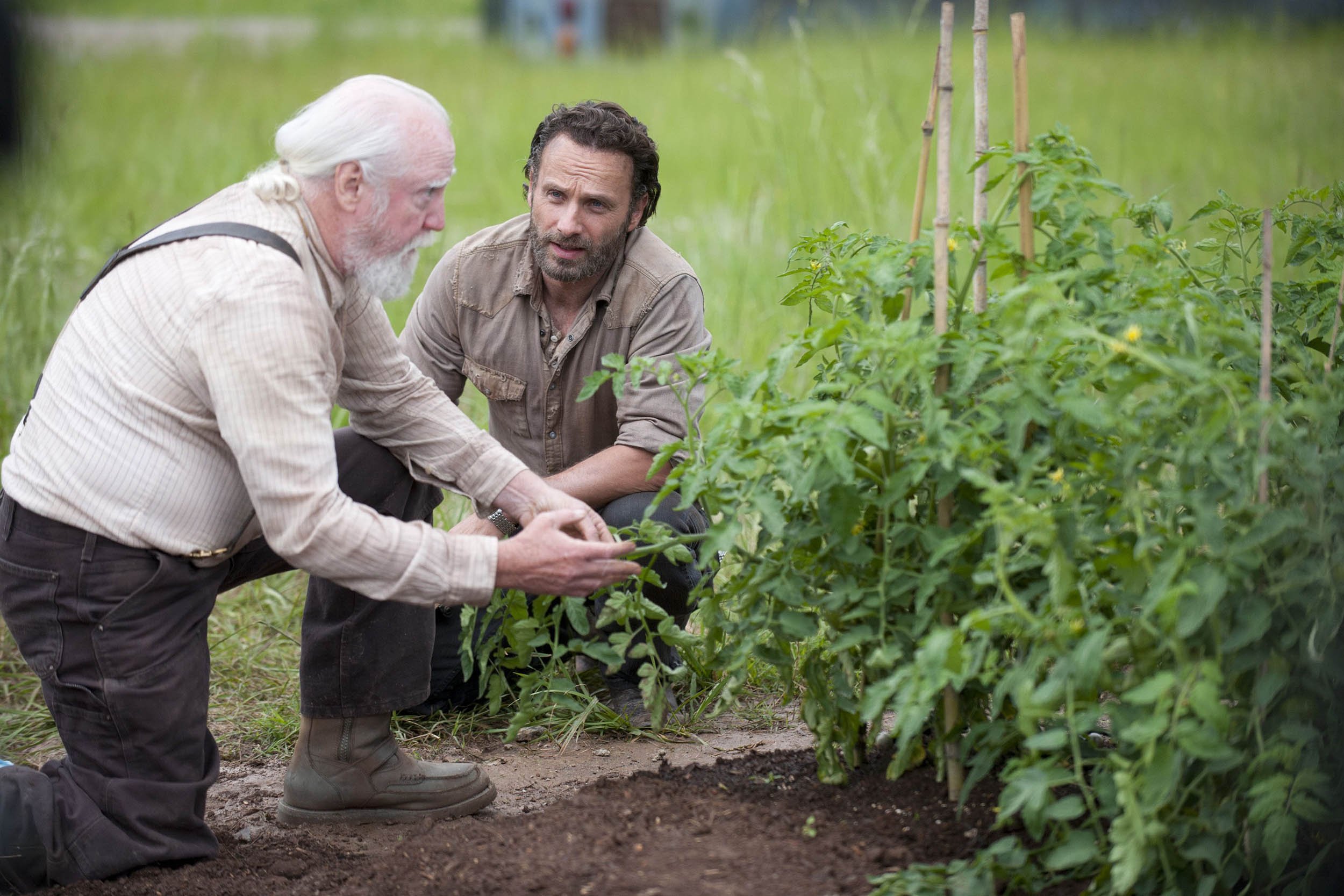 The season-four premiere of The Walking Dead opens with a shot of Rick (Andrew Lincoln) from the waist down as he walks behind a row of thriving herbs and plants. He makes his way out to the main grounds of the prison complex where he and his fellow survivors have hunkered down, where he splashes his face with water and tends to the flourishing crops. These snapshots of life after last season’s Woodbury conflict seem to suggest a new beginning for Rick and the other survivors. And yet, each shot in the pre-credit sequence is framed through the chain-linked fences that both surround and wind within the prison grounds; even the water reflects their endless steel patterns. Though subtle, this imagery may prove to be more telling than the scene’s overt reminders of the constant threat of both zombies and human conflict (represented, respectively, by the walker horde clawing at the fence and a buried gun), despite the fact that each now appears to be held in check. In fact, the visually closed-in, trapped feeling of the prologue (despite its taking place outdoors) suggests that an even greater danger may soon befall the survivors. By the end of “30 Days Without an Accident,” that threat is revealed to be disease. The road to that revelation, however, is marked by the same flaws that have become staples of the series to this point.

For much of its duration, the episode is a relatively tame entry in the series, particularly for a season premiere. Where the previous two openers depicted the protagonists taking refuge in a new locale (the farm in season two, the prison in season three), the main difference here is that the group is settled down and comfortable somewhere. Last season’s finale concluded on a decidedly hopeful note, with the David Morrissey’s Governor having been effectively neutralized and Rick taking in residents of Woodbury and renouncing his borderline dictatorial ways. Although this season opens on a familiar setting, this time the prison feels less like a tomb and more like a lived-in place. The human group is larger and more accustomed to a less pronounced margin of fear in their day-to-day living. There are food lines, reading clubs, and livestock pens, and even some romance for some of the newer characters. The group is also better fortified, with stronger gate defenses and a healthy rotation of folks leaving the complex for supplies.

Nonetheless, among all the chummy dialogue and positive vibes is groundwork for what new show runner Scott Gimple is setting up as the group’s next crisis. The end tease, with a new character’s sudden death after a violent coughing spell, can only indicate that some form of disease will tear through the prison community, forcing difficult decisions down the road and potentially setting the series itself on a new path. Gimple, who’s responsible for writing some of the show’s finest episodes, including last season’s “Clear,” puts the clues about in the open (such as the sick pig that Carl gives a name to), but how this will affect the dynamic between the core characters remains to be seen. “30 Days Without an Accident” gives us very little to get a firm grip on, and it might be tempting to read too much into some of the clues.

Of the two main story threads that develop, the one involving Daryl (Norman Reedus) and Glen’s (Steven Yeun) search of an abandoned grocery story comes across more as a structural necessity than anything else. It gives the episode its only bits of zombie action, which has a back-to-basics sensibility. Not much of interest happens here other than the expected close encounters and a grisly death for a minor character; nevertheless, the visual touch of zombies coming through the eroding roof is an inventive bit.

On the other hand, the subplot involving Rick’s encounter with a fragile, desperate woman in the forest may offer a hint of thematic foreshadowing for the concerns of this season. Having essentially given up his leadership position to focus more on raising Carl (Chandler Riggs) the right way, Rick is less willing to engage in violence and, thus, arguably more vulnerable. That the cautious aid he offers the woman backfires may be a vital sign that the series is taking a new perspective on the concept of humanity and survival with which it’s long been concerned. The woman’s attempt on Rick’s life isn’t made out of maliciousness, but out of a misguided impulse to prolong the survival of one of her own. Whereas one of the central messages of previous seasons was that fraternity prevails over isolation, here Gimple seems to be questioning the assumption that helping each other in times of need is the best path for survival. Gimple smartly couches this idea with the episode’s main reveal about an impending disease and proposes a metaphorical scenario that coming together for the sake of survival may actually be the catalyst that brings down the entire community.

The episode’s underlying questions and thematic concerns, along with quieter rhythms, subtle imagery, and narrative crescendo, are not only a welcome change, but potentially also a preview of a better future for The Walking Dead. (It’s worth pointing out that last season started promisingly as well, before ultimately winding down in disappointing fashion.) But whether the series can overcome the built-in hurdles of its narrative conceit is too early to tell. Despite offering a number of encouraging developments, “30 Days Without an Accident” also displays flaws that have consistently dogged The Walking Dead, specifically reinforcing that character depth and exposition are not among the show’s strong suits. While Daryl and Hershel (Scott Wilson) continue to be the most grounded and interesting members of the main group, many newer characters, and even the more established likes of Maggie (Lauren Cohan) and Glen, have little of substance to say or do. On the plus side, Carol’s (Melissa McBride) playful banter with Daryl offers a glimmer of hope for her long overdue emergence from “minor” character status. But even a few nice character moments are not enough to distract from the increasingly obvious truth that the introduction of more speaking roles on a series about the zombie apocalypse is more so a byproduct of the show’s reliance on giving zombies meat to chew on rather than crafting compelling bits of storytelling and character.