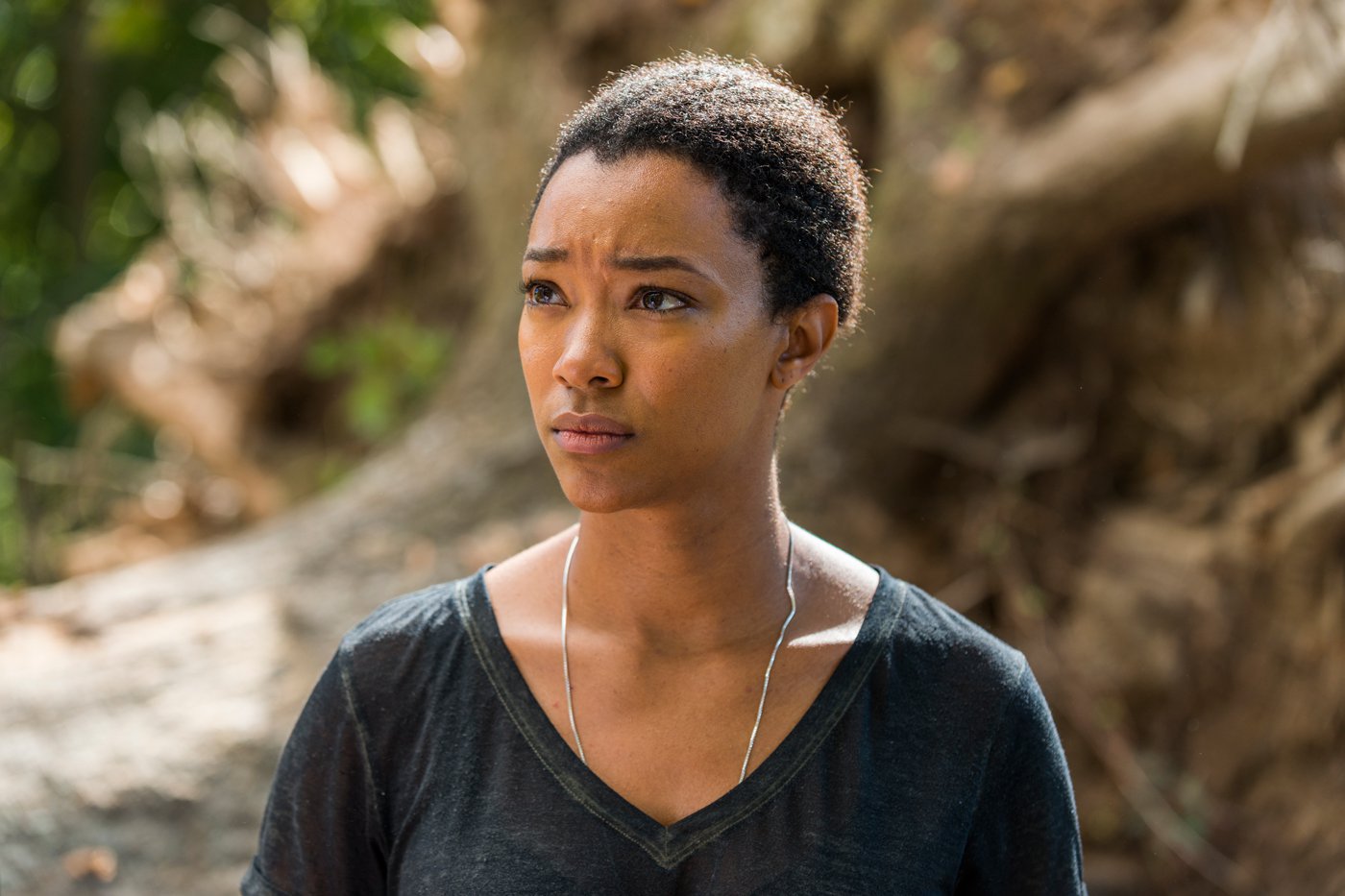 The absence of dialogue in the scenes before the opening credits of this week’s episode of The Walking Dead, “The Other Side,” makes Maggie (Lauren Cohan) seem nearly iconic: a legend in the making. Throughout these scenes, she teaches knife-throwing and does that benevolent-leader thing of acknowledging people by placing a reassuring hand on their shoulder. It’s good to see her, since she’s been absent from the last few episodes, and particularly gratifying to see her looking good, almost as happy and loose as Rick and Michonne did during their extended supply run in “Say Yes.”

Under Maggie’s steady hand, the Hilltop has been tricked out with new (at least to us) features that should come in handy in the coming fight again Negan and the Saviors. There’s the escape hatch she had dug under the woodpile, through which Sasha (Sonequa Martin-Green) and Rosita (Christian Serratos) scoot off to the Sanctuary. The root cellar also has a secret space, which allows Maggie and Daryl (Norman Reedus) to hide during a surprise visit from the Saviors, and Maggie’s cool head and sharp instincts about when to fight and when to hold your fire restrain Daryl from making a fatally rash move when a Savior comes down to scope out the cellar. But after the Saviors’ visit, the Hilltop is newly vulnerable, too, and the loss of their doctor seems particularly ominous in light of Maggie’s pregnancy.

Sasha’s quiet heroism comes into sharper focus in “The Other Side,” as her scenes, which are intercut with Maggie’s in the opening sequence, become the dominant narrative of the episode. Convinced that Maggie no longer needs her protection, Sasha leaves Maggie in the care of the rest of her new posse, Enid (Katelyn Nacon) and Jesus (Tom Payne). She heads off to do something only she can do: stop Rosita from sacrificing herself in a suicidal attack on Negan, because Sasha doesn’t think the group can afford to lose someone who can defuse bombs and hot-wire cars.

Sasha is the latest in a long line of Alexandrians and their allies who’re making increasingly agonizing sacrifices for the greater good. In last week’s episode, “Bury Me Here,” Richard offered up his own life so others might live, and Morgan broke his strictures against killing in just about the most difficult way possible: by strangling a friend with his bare hands. Sasha puts her plan in motion in typically un-self-aggrandizing, considerate ways. The tender, private smile she indulges in when Enid leaves, after the girl has sternly informed her that she’s about to tell Maggie about Sasha and Rosita’s plan to kill Negan, reveals that Sasha cares more about Maggie having a loyal sidekick than she does about keeping her own secret.

Sasha’s gentle but persistent compliments and questions crack the taciturn Rosita’s defensive shell, so viewers finally get her backstory. Judging by The Walking Dead’s track record of soul-baring speeches preceding a character’s death, that conversation may spell bad news for Rosita. But it’s also a huge relief, letting her unburden her troubled soul and cementing the partnership between her and Sasha, who’ve been dancing uneasily around one another ever since they discovered that they were both in love with the same man. In “Rock in the Road,” Rosita told Sasha: “We both had sex with the same dead guy. Doesn’t make us friends.” In “The Other Side,” she comes to terms with the fact that their shared love of Abraham doesn’t have to make them enemies either, especially since they have a lot more than him in common.

The walker apocalypse has been good for Rosita in some ways, even as it jammed up her emotions with PTSD. In the early days after the world fell apart, she tells Sasha, she was distressingly ill-equipped for survival. Men kept volunteering to protect her, “like there was no way I could know how to take care of myself,” but the new reality soon turned the passive girl into a capable woman. “They didn’t even notice I was picking up everything they knew how to do and doing it better,” she says of her self-appointed protectors, but nobody’s putting Rosita in a corner anymore.

In the subplot about the Saviors poaching Dr. Carson (R. Keith Harris), Simon (Steven Ogg), the leader of the Saviors group that collects “dues” from the Hilltop, functions as a comic mirror to the grimly serious Rosita. The new world has been good to Simon too, offering him a level of bourgeois consumption he never got within sniffing distance of before. As he informs Gregory (Xander Berkeley), he’s “a man of shifting specifics, tastes in transition.” Not only has he graduated from gin to high-end tequila, he’s discovered the glories of cardamom gelato. “Shit you not,” he says.

Post-apocalyptic life has clearly stiffened Eugene’s (Josh McDermitt) spine some, but it remains to be seen if he’s brave enough to stand up to Negan. When Sasha and Rosita first scope out the Sanctuary’s perimeter and see him ordering people around, Rosita instantly assumes he’s “playing some angle.” I had a less charitable take on how quickly and seemingly happily he settled into his high-status, relatively cushy life in the Sanctuary in “Hostilities and Calamities,” but Rosita is probably right. Eugene’s agonized expression when the two offer to break him out, plus the fact that he doesn’t raise an alarm to get the two shot or arrested, make it appear likely that he’s working some kind of long game, maybe even planning to undermine the Sanctuary from within. And Eugene already proved, when he subverted Dwight’s ambush in season six’s “Twice As Far” by pretending to betray Abraham, that he’s capable of tricking the Saviors by faking cowardly self-interest.

As “The Other Side” ends, Sasha is inside the Sanctuary on a suicide mission. But if she fails to shoot Negan (and surely, after all this buildup to war, there’s no way that getting rid of him will be that easy), she’s likely to get arrested rather than killed right away, since Negan will want to dispatch her in one of those gruesome shows of public torture and execution he loves to stage. And if she’s locked up, that will make at least two allies of the Alexandrians—Sasha and Dr. Carson—inside the Sanctuary. Three if Eugene is also on board, possibly even four, if Rosita survives the raid but gets arrested. That just might be enough people to marshal the oppressed and brutalized Saviors who have no love for Negan and organize a resistance from within.