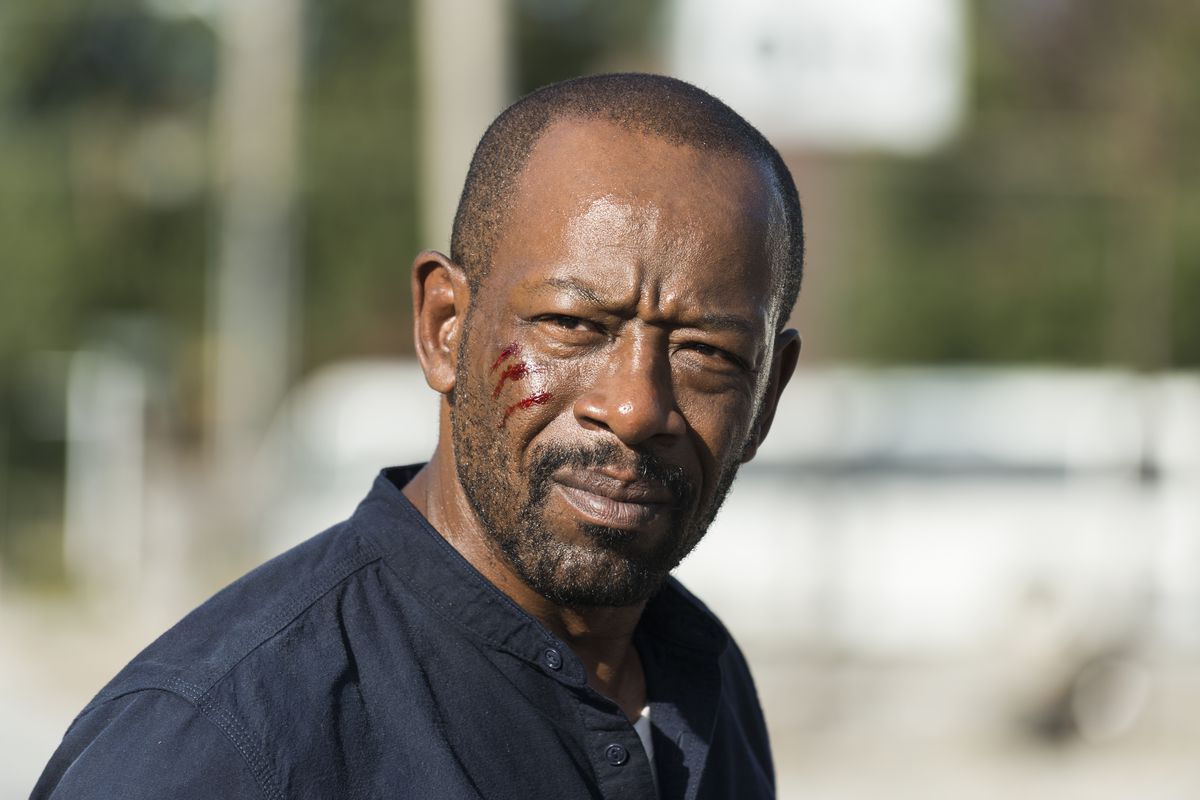 With “Bury Me Here,” The Walking Dead snaps back to its default position for this season, focusing on how Rick’s group and their allies are getting motivated and ready to engage the Saviors. The dialogue gets reset too, laden with expository or aphoristic speeches, so Richard’s (Karl Makinen) suicide-by-Morgan death galvanizes other key players to commit to the cause—but only after Richard has portentously warned Morgan (Lennie James) that he will live to regret it if he doesn’t abandon his dream of pacifism, then spouted one of those geysers of backstory that always signals a character’s death.

That kind of talk-as-lecture and heavy-handed foreshadowing is baked into this show’s DNA, but the dialogue for most of this season’s second half has been much subtler and more supple, more like life and less like something you’d hear in an unironic superhero film. It was enough of a shift to make me wonder if the showrunners might have decided to rework the dialogue too, when they agreed to dial down the sadistic violence after losing so many viewers with this season’s premiere. Their new commitment to downplaying gore registers as a benediction when Benjamin (Logan Miller) is shot and bleeds out, which plays as a muted, unsensationalized tragedy. We hear but don’t see the gunshots that down him, and we don’t witness his death or the mercy-spiking of his brain to keep him from returning as a walker.

But maybe the show’s recent spate of more colloquial rushes of dialogue has just been a coincidence, judging by the many moments in “Bury Me Here” like when one of King Ezekiel’s (Khary Payton) people informs him that the Kingdom’s plants are plagued with weevils. After getting his attention for that important announcement, the viewer might think she would either ask or tell him what they’re going to do about the pests. But no, she just advises her leader that he shouldn’t be afraid to get rid of the diseased plants in his garden because everything can grow back again—a ponderous pronouncement whose not-so-subtle subtext is yet another call to war.

At least the visual storytelling on display throughout the episode is much more consistently strong. The line of shopping carts in the shape of an arrow that block the road for the contingent from the Kingdom, pointing to a pre-dug grave complete with a “bury me here” sign, seems at first to be an atypically on-the-nose exception to that rule, but that “trap” turns out to have been part of Richard’s clumsy plan to ignite war with the Saviors.

The episode’s opening shot of a lone cantaloupe being loaded onto a truck with ritual care by a sorrowful Ezekiel and his lieutenants also plays with the audience’s perceptions in ingenious ways. At first look, the image is emotionally resonant but slightly absurd. When it’s repeated midway through “Bury Me Here,” it’s tragic and enraging, since by then we know that piece of fruit was responsible for Benjamin’s death. At least, partly responsible, because Jared (Joshua Mikel) probably pivoted from Richard to Benjamin in retaliation for the beating Benjamin gave him in “New Best Friends.”

Richard’s kamikaze plan for starting the war may not have unfolded the way he had intended, but Benjamin’s death is more than just a devastating bit of collateral damage; it’s the catalyst Richard was looking for. Both Morgan and Ezekiel have been de facto fathers to Benjamin and his brother, and his death touches both deeply, forcing them to question the underlying philosophies that they were teaching their eager pupil. When Gavin (Jayson Warner Smith) asks Ezekiel if he understands how things work now, after Benjamin is shot, the barely repressed fury with which Ezekiel says “yes” and the way he glares at Gavin indicate that he has finally crossed that line Richard kept trying to push him over and decided to go to war against the Saviors.

Even Morgan signs onto the plan Richard championed—though, ironically, he signals his acceptance by killing Richard. His decision to act is typical Morgan: agonizing and deeply ethical. It’s cagey, too, a way of convincing the Saviors that the Kingdom is too cowed to consider an uprising. Later in the episode, Morgan makes another ethical choice when he decides that Carol (Melissa McBride) deserves the truth about what Negan has done to the Alexandrians. That news galvanizes Carol to action, as everyone knew it would, so those two reluctant but powerful warriors have now joined the fight.

If Morgan is at one end of the ethical scale, Gavin is at the other. He’s the Adolph Eichmann of Negan’s troops, an exasperated bureaucratic who acts as if he doesn’t enjoy intimidating and occasionally killing people; it’s just the least pleasant part of the difficult but necessary job with which he’s been tasked. A master at victim-blaming, he lectures Ezekiel and his men after taking their guns, chiding them for failing to behave well when things “get emotional”—an infuriating euphemism for the havoc he’s about to unleash in the form of the feral Jared. He gets almost as angry at Jared when he goes too far, but you get the sense it’s all about the rules for him: What’s worst about Jared having killed Benjamin is that he was supposed to have killed Richard.

One problem with having so many characters and plot lines currently in play on The Walking Dead is that some are bound to feel neglected at any given time. I’ve been missing Maggie lately, wondering how she’s doing at solidifying support in the Hilltop. It’s also been some time since viewers have checked in on life behind Alexandria’s walls, and then there’s that all-female group in Oceanside to be incorporated—or not—into Rick’s alliance. Another is that episodes like “Bury Me Here” can feel too plot-heavy, tracing alliances and choreographing fight scenes at the expense of exploring thoughts and feelings and relationships. When The Walking Dead does all of those things at once, it comes thrillingly alive as, but it can feel stiffly undead when it burdens its characters with too many grim silences or expository speeches.