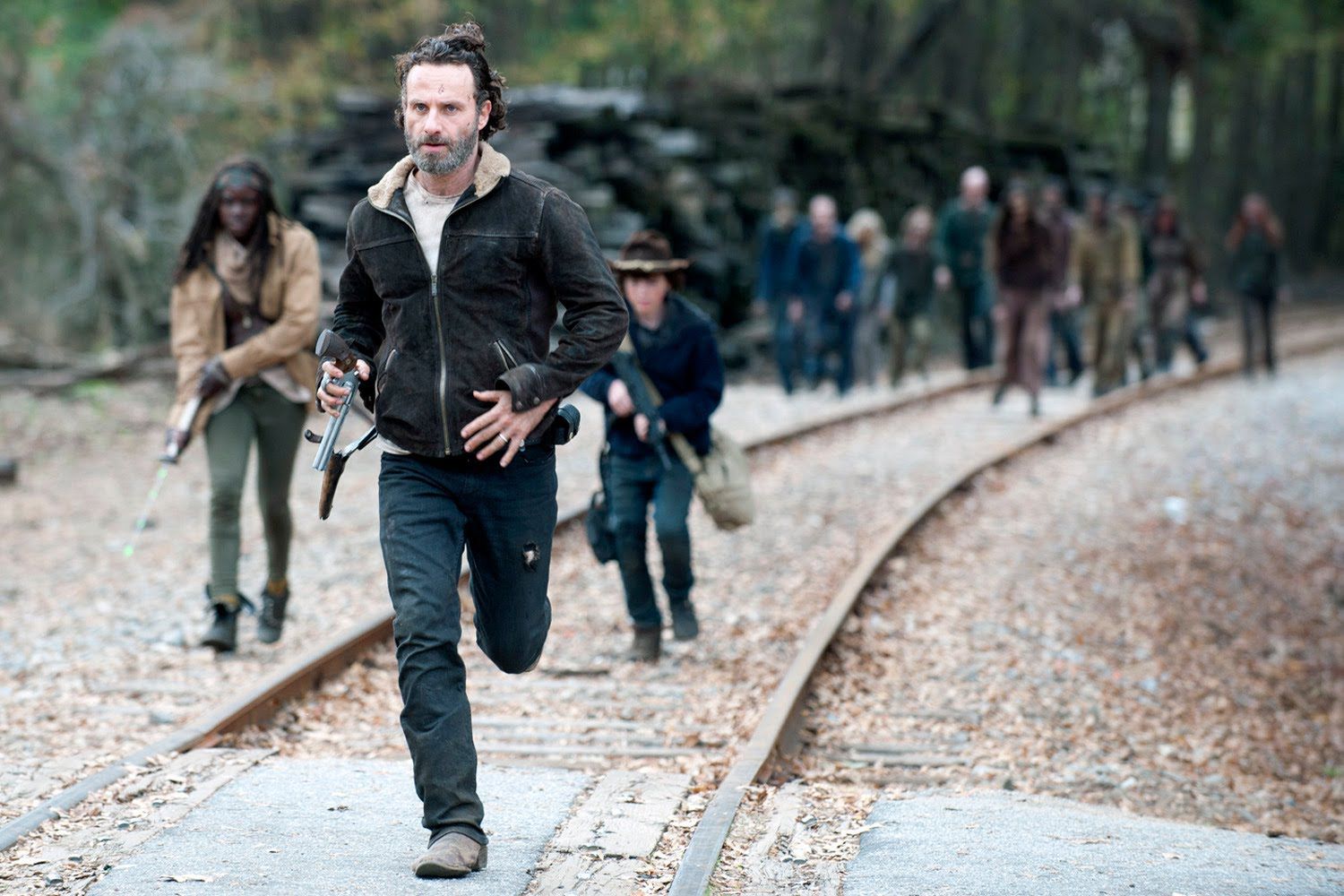 Rick (Andrew Lincoln) has always been more than just the lead protagonist of The Walking Dead. His journey from a moral, small-town deputy to the leader of a group of survivors in the wake of the zombie apocalypse has guided the series through its survey of civilization on the edge of ruin, and his struggle to keep his family together and maintain his humanity has consistently served as the show’s emotional anchor. In The Walking Dead’s fourth season, the character’s trajectory has been much less immediately clear. The first half of the season—right up until the Governor’s assault on the prison community—was very much focused on Rick and dealt with his newfound life as a father and farmer, not as a leader. After the fall of the prison, however, the narrative focus shifted to all of the group’s surviving members, who were now dispersed throughout Georgia’s backwoods, each searching for hope and a reason to keep going.

In the show’s fourth-season finale, “A,” the emphasis returns to Rick. More importantly, the episode offers insight into why he drifted into the background of the show’s main story. The opening close-up of Rick’s trembling face caked in blood reveals little behind his eyes. About halfway through the episode, we learn how he arrived there, after a tense and prolonged encounter with Joe’s (Jeff Kober) group. The scene is so zoned in on Rick’s rage after watching Carl (Chandler Riggs) be threatened that the dramatic angle resulting from Daryl’s (Norman Reedus) connection to Joe’s group fails to meaningfully register. Despite events in the previous episode that saw Daryl adopt the code of Joe’s group, his allegiance to Rick is never in question. But the key moment in the clash is the way Rick defeats Joe and his followers. Without a weapon, he sinks his teeth into Joe’s neck and rips out his flesh—a visual that bears an obvious link to the way walkers devour their prey. Even more unsettling is the way Rick kills Carl’s assailant by savagely and repeatedly stabbing him and continuing to mutilate his body long after he’s dead.

In a quiet exchange later in the episode, Michonne (Danai Gurira) and Carl swap tales about their past and question who they’ve become. Michonne’s backstory about how she lost her child and the dark place she went to in the time after bears a close tie to the way Rick has dealt with his own strife over losing his wife and nearly losing his son. But the most important detail is how she decided to “come back,” bringing to mind what Rick argued for in his plea to the Governor to call off his attack on the prison at the season midway point. After Michonne’s emotional purge, Carl then shares a memory about Rick telling him that he was “proud of the man I had become.” The exchange makes clear that Carl and Michonne have maintained a semblance of their past selves, simply by struggling with it and talking about it. On the other hand, as the previous standoff has shown, Rick is capable only of reverting to an instinctual method of living. Protecting his son is his only directive, even if that means sacrificing the relationship he once had with him. Even Rick’s discussion with Daryl, in which he calls him his “brother,” reflects his primal state of existence.

In the episode’s final stretch, Rick and company arrive at Terminus feeling slightly more suspicious than Glen (Steven Yeun), Maggie (Lauren Cohan), and the others did in the previous episode. Initially, the community they meet doesn’t appear to be very different from the one they attempted to build back at the prison compound, but soon Rick realizes that it’s all an elaborate ruse designed to make them feel safe before guiding them right into a trap. The motives of the Terminus community, though not spelled out, very much infer a plan to use those who they trap for something. (In fact, the quick shot of what appears to be a massive pile of human bones seems to confirm a widespread Internet rumor regarding cannibalism.) Thus, the reunion between Rick’s group with Glen and Maggie’s own at the end of the episode is anything but happy. And still, Rick’s final bloodlusty line (“They’re messing with the wrong group!”) is oddly reassuring and conveys a different kind of vision of hope than we’re used to. For so long, The Walking Dead has posed broader questions about how people maintain a sense of decency when the world has gone to hell, but the journey this season offers a simple answer: We don’t.

It’s too early to say at this point whether The Walking Dead will go the way of Breaking Bad and begin to explore the more alluring aspects of a compromised moral state. But the mere suggestion is intriguing, in spite of the flaws the series routinely serves up, even up until this season’s final moments. In looking at the sum total of the fourth season, it’s difficult to overlook the show’s mechanical flaws, over-plotting, and relative paucity of convincing characterization. And yet, showrunner Scott Gimple’s agenda may be more clever and nuanced than it may appear on the surface. With this season, Gimple probes the intermixing concepts of hope and the will to survive. But there’s a subtle act to what he’s doing, albeit in a needlessly drawn-out way. Despite the fragmentation and the lack of a strong narrative arc, this season has consistently shown to be about the false hope of believing in a better future. The Terminus plotline, while heavily truncated, about a community that preys on the hope and desperation of its incoming victims, therefore seems like the right note for the season to go out on.

Survival, alas, may be a means to its own end. And the key to all of this was always Rick, who comes across less like a protagonist, a leader, and an overall good person, quite simply, because he’s none of those things.