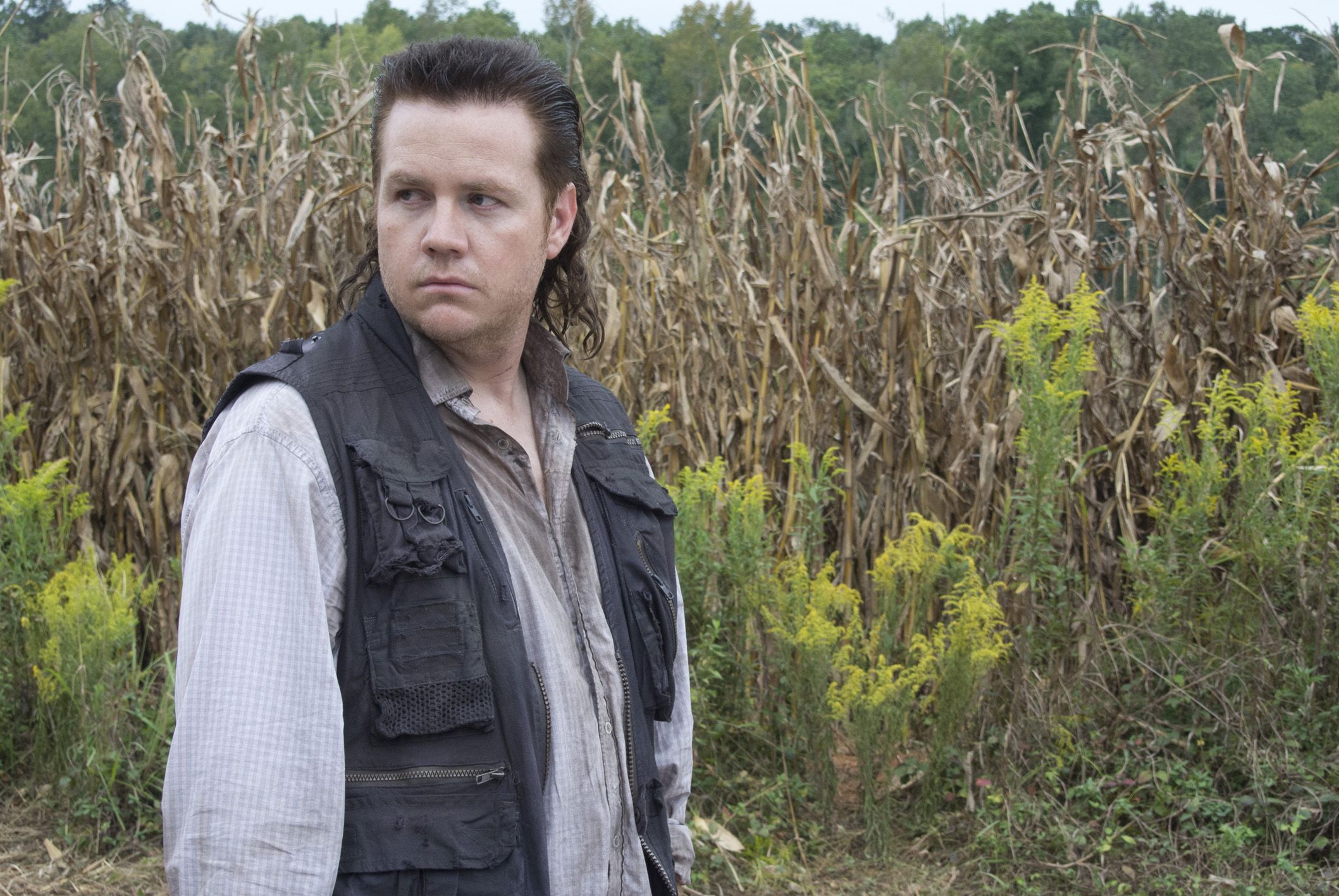 “This place…is it home, or just a stop along the way?” Michonne (Danai Gurira) asks Rick (Andrew Lincoln) early in “Claimed” as the two stand in the kitchen of an abandoned but tidy suburban home. Of course, since the house offers no protection on par with the gates that lined the perimeter of their last shelter, it would be unlikely that they’d hunker down here for very long, even if walker activity has been relatively low. The real weight of the question is rather that Michonne posed it at all, as if she hasn’t understood by now that settling down is no longer a realistic end. Yet, with each moment that passes among the comforting surroundings reminiscent of a time and place before the dead walked, both Michonne and Rick are perhaps lulled into a false sense of security and let down their respective guards in different ways.

With Rick returning to health and Michonne rejoining him and Carl (Chandler Riggs), the episode’s early scenes exude an air of levity, particularly in Michonne and Carl’s conversations. A major focus of “Claimed” is how their dialogue gradually morphs from light to serious, as Michonne’s initial attempts at cheering the sullen boy up in the wake of the loss of his baby sister appear fruitless. Later, when they investigate a home, Michonne starts to volunteer information about her past, and the way she teases Carl with select information (specifically about her child), only revealing it once rooms have been cleared, is a surprisingly tender bonding moment between them, based on a motherly sense of performance and reward. The sequence is capped by Michonne’s discovery of a family’s decaying bodies lying peacefully in a pink-lit child’s room, which she attempts to keep secret from Carl. In one of this season’s most haunting scenes, aided by Bear McCreary’s ethereal score, she pauses in horror and realizes that an adult has apparently gunned down her own children in their beds.

These scenes are marked by a noteable absence of walkers. And though the threat of walkers is also missing from the scenes with Rick back at their safe house, his situation unexpectedly turns grave. While resting on a bed on the second floor, he’s awakened by the sound of men apparently torturing someone downstairs. The hushed anxiety of the scene is heightened by the claustrophobic focus on Rick, who’s forced to hide under the bed and wait in silence as the armed, brutish men scour the house. During a scene in which one man investigates the bedroom before lying down on the mattress, every shot is either a close-up of Rick or from his perspective under the bed. The tension culminates in an unsettling skirmish in the bathroom, in which Rick must quietly strangle his opponent so as not to attract the attention of the other men downstairs. The entire sequence possesses a fervent tension that ranks right alongside the thrilling clash between Rick and the ill-willed folks at a bar in the show’s second season.

Unfortunately, the episode’s other main storyline—involving Glen (Steven Yeun), Tara (Alanna Masterson), and a trio of newcomers—offers none of the suspense or mounting disquiet of the Rick-Michonne-Carl thread and, by comparison, comes across as markedly dull. First among the problems is the depiction of Glen, who, when he’s not unconscious, is walking decisively in some unknown direction in hopes of finding Maggie. The writers want to re-emphasize that to live without purpose is no life at all, and that Maggie is Glen’s purpose, but the way he brashly blows off everything and everyone that doesn’t involve his mission to find her threatens to diminish any dimension to his character that’s been developed over the course of the series. Moreover, it comes across as a veiled attempt to imbue a sense of conflict into a storyline that lacks a convincing one.

The leader of the small group with whom Glen and Tara join up is the seemingly earnest military man Abraham (Michael Cudlitz), who’s desperate to get to Washington D.C., where he thinks the solution lies to the zombie outbreak. His sidekick, a wormy doctor by the name of Eugene (Josh McDermitt), claims to hold the key to unlocking the mystery, but given his idiot savant-ish demeanor and silence on the matter, something else may be afoot. While these puzzling developments may eventually generate some interest down the line, here they come across as half-formed attempts to wring any bit of intrigue out of a plot that’s beginning to otherwise lack interest.

Tying the episode’s two main storylines together, thematically, is a collective sense of yearning manifesting through the different wish-fulfillment fantasies of the characters. Tonally, however, “Claimed” suffers from pronounced lopsidedness in the efficacy of how these ideas are expressed. While the palpable tension and emotion of the Rick-Michonne-Carl portion of the episode represents some of the show’s strongest material of late, it’s counteracted by the shapeless and generally flat components of the other storyline. Thus, “Claimed” amounts to yet another disjointed entry in The Walking Dead’s peculiar fourth season. No doubt showrunner Scott Gimple has a plan for how the show’s numerous elements will coalesce by season’s end, and there are certainly enough intriguing details for it to smooth out eventually. In the mean time, however, the show’s interplay of sporadic clunkiness and occasionally profound clarity remains frustratingly elusive.

Review: Those Who Kill: Season One