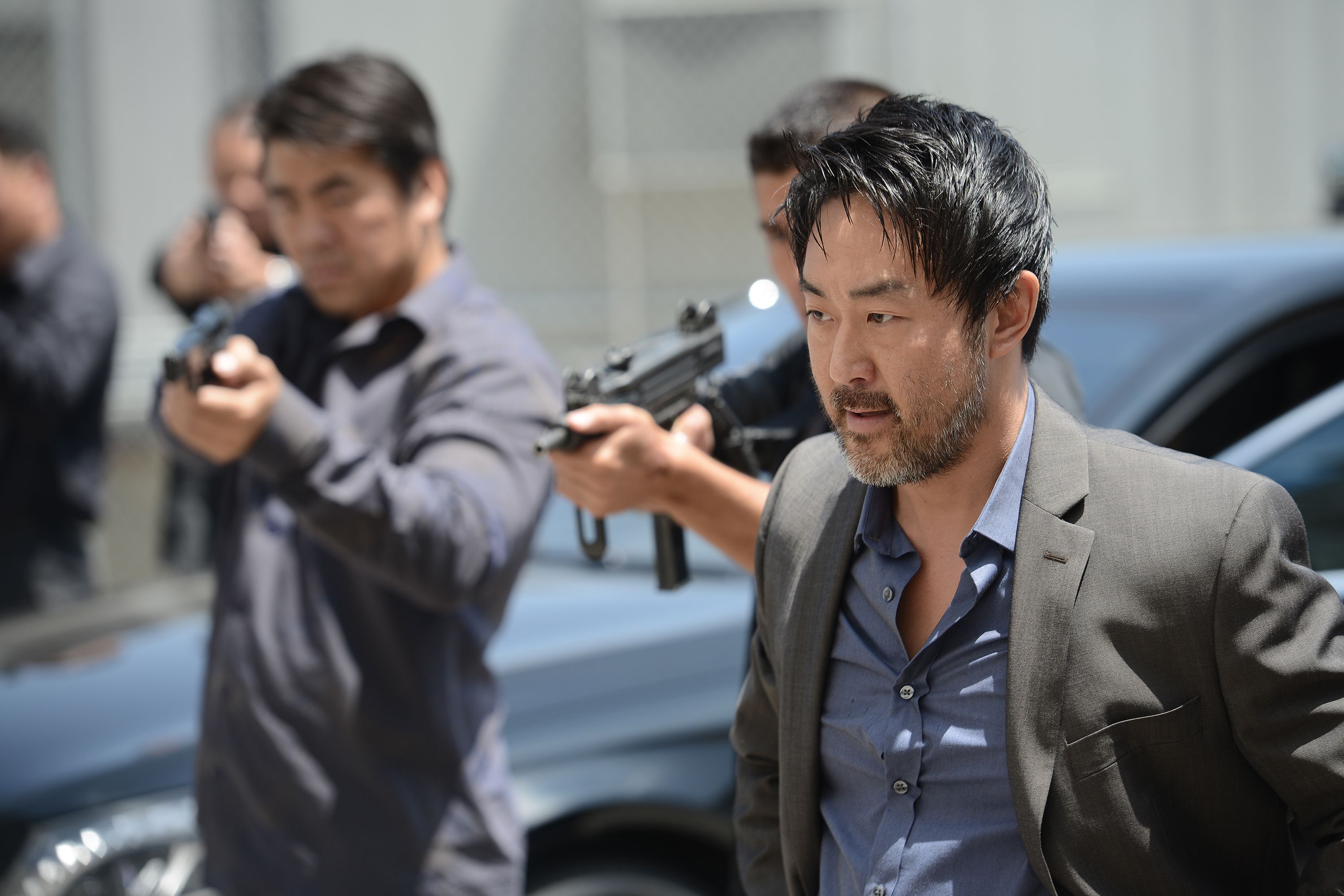 Amid a room riddled with bodies and bullet holes, a king smokes quietly on the couch. He ponders alone, looking down at all of his fallen disciples. If it weren’t for all the bloodstains and gaping wounds, the eerie opening shot of “Some Strange Eruption” might seem like the beginning of a party sequence gone wrong. The camera slowly pulls back from a comatose Jax Teller (Charlie Hunnam) as he sits within the confines of Dioasa, the high-end brothel that was turned into a mass grave in the previous episode of Sons of Anarchy. It tracks without cutting from one heinous image to the next, surveying the damage done to SAMCRO’s infrastructure by Chinese crime lord George Lin (Kenneth Choi) and his men.

In many ways “Some Strange Eruption,” directed by actor Peter Weller, functions as a key transition episode for the series and a wake-up call for its conniving antihero. Compromise is mentioned during high-intensity dialogue sequences, yet this word carries very little meaning in a criminal underworld where panic often wins the day. With so much death being dealt out in such a short amount of time, all the key players now scamper like cockroaches to either make amends or snuff out threats. It’s not survival of the fittest, but survival of the smartest.

After wreaking infinite damage on SAMCRO with his nighttime strikes at the end of “Pretty Little Lambs,” Lin tries to strong-arm Nero (Jimmy Smits) into betraying SAMCRO and delivering Jax on a platter. But this only force-feeds a brutish mea culpa between the young president and his surrogate father that’s long been necessary for their mutual survival. After Nero unleashes some hand-of-God righteousness on Jax (with Smits chewing scenery like a boss), the two men finally hatch a plan to take out Lin with the help of corrupt Stockton cop Charlie Barosky (Weller).

What’s most interesting about this plot thread isn’t the psychological maneuvering that Jax, Nero, and Barosky achieve in order to catch Lin in a vulnerable position, but how their situation represents a subversion of the longstanding gangster film convention of “vouching” for someone. In most cases, once loyalty and confidence have been lost between criminals, it’s impossible to go back. But Sons of Anarchy shows time and again that its characters secretly hope for this kind of reinstallation of confidence. The fantastic push-pull between Jax and his doomed best friend, Opie, in the show’s first five seasons is a great example.

The tenuous relationship between Gemma (Katey Sagal) and Juice (Theo Rossi) also finally reaches a boiling point. The latter’s extreme paranoia culminates in a sudden moment of senseless violence inside his hotel room; Juice mistakes a concierge for one of Lin’s assassins and acts accordingly. An increasingly relevant trend this season revolves around the murder of regular citizens outside the SAMCRO world, and Juice’s actions declare that there’s inevitably more of this collateral damage to come.

Sensing Juice’s imminent breakdown, Gemma takes the proper steps to eliminate him from the situation, thus protecting her epic lie that has set all of this chaos in motion. During their nighttime drive out of town, the young biker realizes something is amiss and fights for Gemma’s gun, causing an accident on the side of the road. For the first time, SAMCRO’s matriarch finds herself in real peril, at the mercy of a broken man who’s just realized his one confidant wanted him dead.

If Gemma’s fate is left in purgatory by episode’s end, Lin’s is secured when police arrest him and his crew after Jax’s double-cross goes slightly sideways. But SAMCRO isn’t safe by any means, because the wrath of August Marks (Billy Brown) awaits on the horizon. At a crucial point in “Some Strange Eruption,” Jax tells Lin that he was simply acting under Marks’s orders, a lie that will eventually trickle its way back to the Oakland crime boss and spell doom for the Teller clan.

In this sense, “Some Strange Eruption” highlights many of the small details that will play an important role later in the season. Young Abel (Evan Londo) picks up a hammer to protect his baby brother, a sign of the violence that’s been festering inside of him. Wayne (Dayton Callie) cleans up Juice’s murder, but seems to make a mental note that he can’t survive in this hazy purgatory between right and wrong. Speaking of blurred lines, Sheriff Althea Jarry (Annabeth Gish) finally explains to Chibs (Tommy Flanagan) why she works both sides of the law: “In order to do my job effectively I have to work with the bad guys. You’re not going away and I’m not going away. I take your cash, you feel safe. It builds trust and it pays for my overtime.” Only in a series as messy as Sons of Anarchy does her skewed logic make perfect sense.

Review: The Affair: Season One