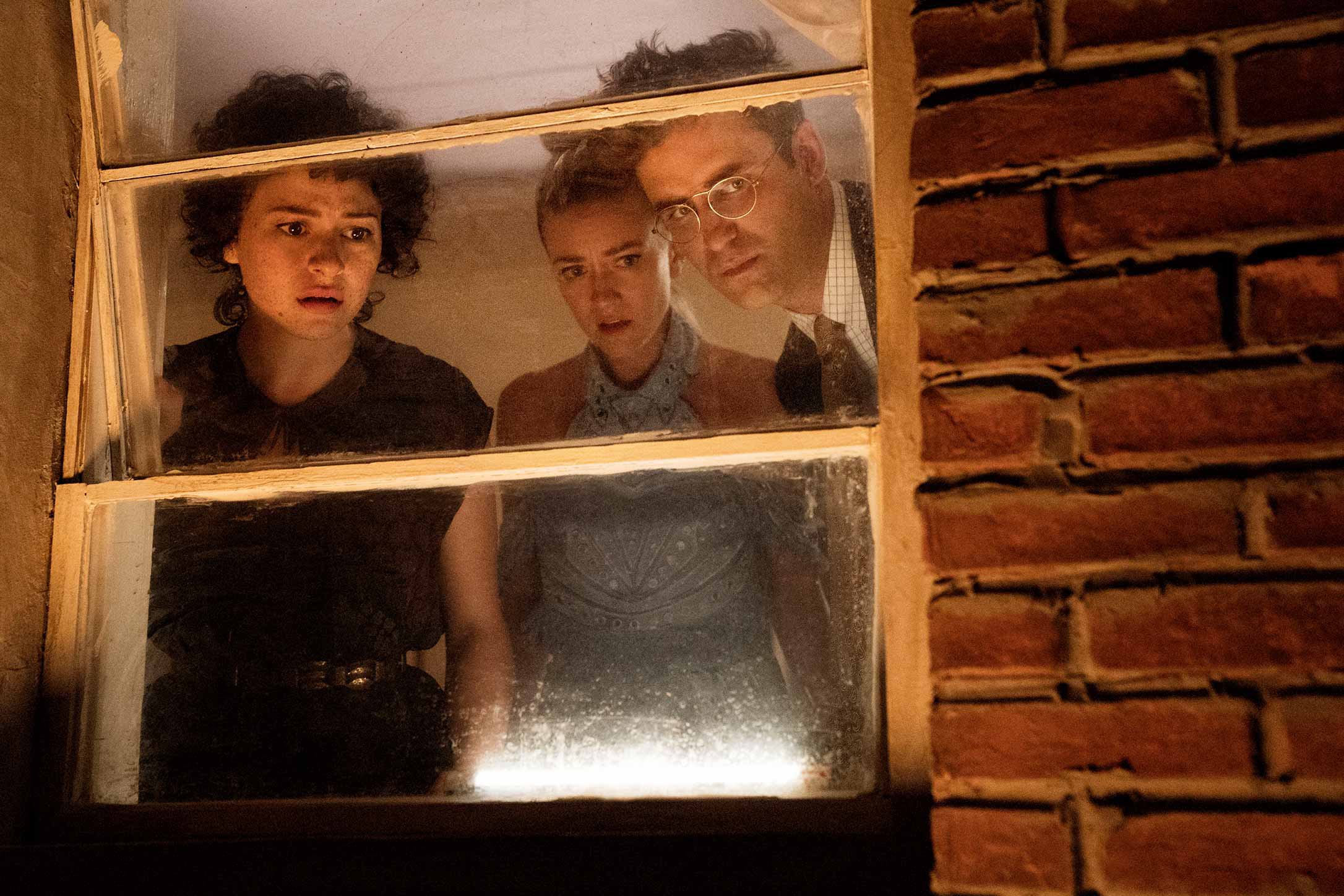 Season two of Search Party wastes no time reminding us that the show’s self-centered Brooklynites have blood on their hands. The premiere episode begins in the immediate aftermath of last season’s finale, with Dory (Alia Shawkat), Drew (John Reynolds), Elliott (John Early), and Portia (Meredith Hagner) deciding not to report the semi-accidental murder of Keith (Ron Livingston), the private investigator whose brief fling with Dory went south for reasons still partially unexplained. After the cold open, the blue letters of the episode’s title card fill with red, which serves as an unsubtle but nonetheless fitting sign of the show’s progression into darker terrain.

In season two, Dory and company retain their bumbling millennial detective quirks while grappling with situations that wallow in the existential dread one might associate with an Alfred Hitchcock film. (The promo posters for the new season are modeled after the master of suspense’s work.) Showrunners Sarah-Violet Bliss and Charles Rogers certainly understand the gravity of trying to cover up a murder, and here they goose their mumblecore mystery-comedy with the disturbing weight of a psychological thriller.

Dory experiences flashbacks of her confrontation with Keith, and the camera often zooms in on her face or tilts around her at odd angles, with the heartbeat on the soundtrack at one point stressing the depth of her trauma. Shawkat’s trembling voice and shallow breathing reflect the manner of an already uncertain woman barely holding herself together. Elsewhere, Early warps Elliott’s narcisstic energy into a kind of self-destructive obliviousness, and the series finds more empathy than comedy in the character’s arc, presenting the horror of the man’s deteriorating mental health at face value.

Search Party’s guilt-ridden characters fail at fully retreating into their privileged lives in the wake of Keith’s death. Drew is still unlikeable, but now his oafishness seems to stem from a flailing desire to re-center after killing a man. His attempt to sabotage a co-worker’s marriage so he can earn a coveted position in Shanghai (and by association get out of dodge) is only somewhat compromised by his sheer awkwardness as he describes made-up anecdotes of infidelity. The arrival of a note from an as-yet-unrevealed messenger who’s aware of Drew’s crime (and may or may not be another co-worker) suggests that he’s not the only one to pass through the office with an ulterior motive, jolting an understated subplot with an unexpected twist.

While Portia exudes a detached air when she returns to her acting career after the shock of seeing a dead body, her casting in a play about the Manson murders quickly gets inside her head. At the end of her audition, the director, Elijah (Jay Duplass), asks her to call the estranged friend he encouraged her to shit-talk moments prior. As she does, the ambient drones of composer Daniel Wahl’s score build beneath the stiff, worried cadence of her words. When Elijah commends Portia’s honesty, the camera tightly frames her face—lips forced into a smile, blue eyes frozen with paranoia—further communicating her increasing concern that the similarity of the play’s subject matter to her experience has somehow made her secret transparent.

Search Party certainly hasn’t lost its sense of humor, which underscores the callousness and posturing many of the characters demonstrate. Scenes with a Hillary Clinton-eqsue senatorial candidate, Mary Ferguson (J. Smith Cameron), feel satirically quoted from Clinton’s cameo appearance on Broad City. The politician inquires about Dory’s Iraqi lineage before explicitly asking her and freelance writer Julian (Brandon Micheal Hall), one of the show’s few black characters, to join her campaign to fill the diversity quota in a sequence that skewers liberal tokenism. Elsewhere, Chantal (Clare McNulty) is a MacGuffin turned nuisance, and Elliott privately disparages her lie about a brutal captor (she actually got a black eye after smacking her face on a counter in a drug-induced stumble) with a blunt one-liner—“I would never lie about abuse, and I’ve lied about cancer”—that amusingly highlights his virtue-signaling.

Bliss and Rogers have an equal adeptness for genre and composition. Dory, Drew, and Elliott debate the circumstances of Keith’s death in a room out of Danny Torrance’s worst nightmare, the severe red hues of the room emphasizing the metaphorical blood on these characters’ hands. The most powerful visual of the season, however, is a simple shot of a windshield. After Dory, Drew, Elliott, and Portia bury a body and deliver a missing woman to her family, Drew drives the gang back to Brooklyn. Portia asserts that she and her friends are good people, and Dory adds that they’ve simply been subjected to an unfortunate situation. The camera watches as the four characters reckon with a new reality, each face souring in its own way as they silently become aware that no legal punishment could ever match their moral damnation.