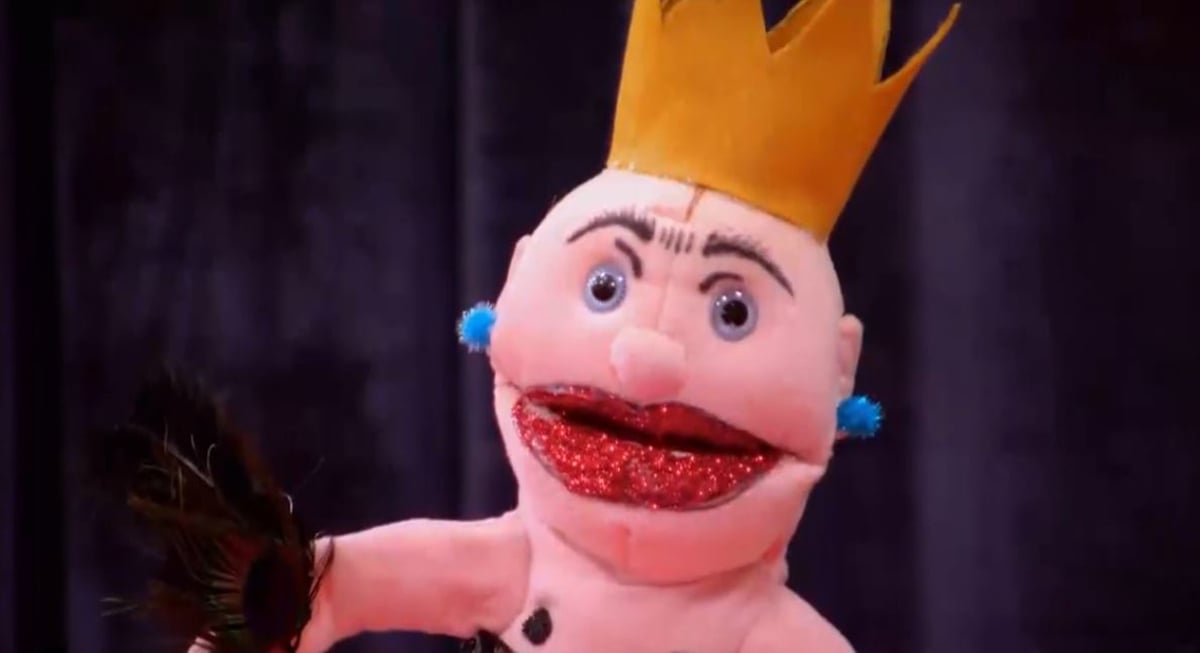 Every season of RuPaul’s Drag Race comes to embody the personalities of its frontrunners. Season six ultimately developed some of Bianca Del Rio’s hectoring tone, which manifested itself most devastatingly in the unraveling of Laganja Estranja, who felt very attacked until she tearfully all but begged to be sent home. Season three turned into a Heathers/Mean Girls showdown between the Heathers and the Boogers, mostly due to the riveting arrogance of Raja, Delta Work, and Manila Luzon from the former group.

Now, following the departure of Nina Bo’nina I Can’t Believe It’s Not Brown, when the workroom is overwhelmed with an influx of legitimate oxygen, it’s especially clear that season nine of Drag Race is walking the path cleared lovingly by RuPaul’s Best Friend Racers, Shea Coulée and Sasha Velour. When it aired, the challenge that forced the queens to roast Michelle Visage felt odd and stilted. Following the results of tonight’s episode, it’s obvious that “RuPaul’s Roast” was a case of total spiritual misalignment—right down to the “Shantay, you stay” awarded to Alexis Michelle, queen of this year’s bitch edit, over the in-over-her-head sweetheart Farrah Moan.

It’s not like you can’t palpably feel the producers trying to find little cracks in the alliance between Sasha and Shea. As many on Reddit have already noted, Sasha has yet to win a challenge without sharing the prize with Shea. And even if she ain’t mad at that, she’s won some of the most wildly inappropriate prizes imaginable (a bald, vegan queen getting hair care products and a year’s worth of hamburgers?). And yet, Sasha’s stayed woke as can be, and Shea remains her biggest fan. What could possibly, finally come between them?

Well, we now know the answer isn’t puppets. Yes, the puppet-show mini-challenge returns. Unlike its close cousin, the “library is open” mini-challenge, this one’s always been more about good-natured ribbing than reading to filth, so it doesn’t stand in stark counterpoint to this season’s tone. In any case, the laughably not-random puppet assignments avoid forcing Shea and Sasha to impersonate the other. Instead, Trinity Taylor gets to hammer how Shea “does things in Chicago”—Katya fan thworp of approval to that one—and Alexis jumps on Sasha’s humanities-degree indulgences. Nothing Alexis mocks is exactly off the mark, but no queen has any less right to chide another one for being studied and theatrical than Alexis, and she alone bombs. Sasha twists the knife with a bemused “Uncanny.” Unclockable, bitch.

In irresistibly Ru fashion, the series follows up this Jim Henson’s Shade Babies vignette by challenging the queens to come up with three LGBTQ pride-friendly looks. That’s right, nothing like inviting five hungry and fierce competitors to feed on their own before making them frock up in “If you can’t love yourself, how’n the hell you gonna love somebody else?” couture. Categories are: Rainbow-She-Betta-Do (rainbow flag-inspired garb), Sexy Unicorns (unicorns that are also sexy), and Village People Eleganza Extravaganza (Village People insert drag lexicon white noise here).

Alexis decides she hasn’t been winning challenges lately because she hasn’t brought an editing eye to her special creations, meaning she’s fixing to simplify what’s already been proven simple. Shea, in her confessional interview, spills this hot T: “I feel like I could go to New York and throw a stone and hit five other queens that do exactly what she does.” Meanwhile, she’s tackling maybe the toughest Village People look to drag up of them all: the construction worker. But she explains to Ru, “I’m a big fan of British fashion: Vivienne Westwood, Burberry,” so you know she’s going to turn it out.

She and the other queens, though, first have to get through an “Oh, and there’s one more thing oh no wait you already knew about the choreographed opening number because Ru gives it to you every season” production number. And because she won the puppet mini-challenge, Sasha is tasked with doing, as Jamie Foxx’s Wanda used to call it, their choreogriffany. A-ha! Finally, Drag Race’s trusty, reliable method for piercing a pristine queen’s armor. Make her tell everyone else what to do with their bodies. Sasha brings legit ideas to the runway rehearsal—including a geometric effort that proves Sasha’s seen Robert Altman’s The Company—and that at least puts her one step ahead of most other contestants who’ve been put in this position before her.

It isn’t long before Alexis and Sasha, in particular, start breaking the chain of command. Which leads to some long-awaited workroom shadiness, including the following exchange that I absolutely died for:

Alexis honestly just wants to honestly let Sasha know that she was outside of her comfort zone coming up with choreography, and that honestly that insecurity honestly came out in her failure to honestly step up and assume a leadership role. Shea steps in to re-contexualize what actually happened, but Alexis’s destructive criticism appears to finally achieve what the show’s producers have been striving for by momentarily driving a wedge between Shea and Sasha, who affirms that Shea was trying to usurp control just as flagrantly as Alexis but maybe didn’t realize it due to their proven sisterhood.

But just kidding. As soon as that flare-up powers down, it’s a swift return to the Shea and Sasha love-in. The choreographed opening number is adequate, which in the context of other similar efforts from past seasons means it’s a Tony-worthy endeavor. (Braxton, not Danza.) And Shea and Sasha serve up three looks that the judges eat up. The best line of the night comes from Michelle Visage, reacting to Sasha’s deconstructed rainbow look topped with a Dorothy Gale house perched atop her bald head: “I’m filing for Section Great.” And the best look of the night comes from Shea, whose Village People look is impeccable and fearless: thigh-high tube socks, a patchwork flannel cape, caution-yellow lipstick, and a hard hat perched atop an Erykah Badu turban.

The strength of that one look carries Shea past Sasha for a solo win, even though Michelle voices reservations over Shea’s rainbow look, which is chic as fuck but avoids primary and secondary colors in favor of Pantone’s deepest cuts. It fits a narrative to think the producers are trying to deliberately and consistently keep Sasha in second place, but to be Alexis honest, the episode is centered around that last Village People look, and there Shea slayed.

Alexis’s editing eye apparently decided that her rainbow look should consist of an eyesore jumpsuit filled with micro stripes, her sexy unicorn look should involve a simple beige bodysuit and cardboard hooves, and her Village People look should be indistinguishable from a Native American look aside from the bow and arrow perched as a fascinator. She tells Michelle she almost died stoning her turquoise bodice, but we’re in the point of the competition where the judges are honestly grading on achievement, not effort.

And, yet again, when Alexis is singled out by Shea and Sasha after Ru inevitably asks the queens who should go home this week, Alexis opts to not own up to her own failings but blame her competitors for not speaking up in the workroom leading up to the final challenge. “Shady whores.” Bitch, please. She’s so in the bottom two, and joined by Peppermint, who sells the garments even though they aren’t worth much, but hey, at least now we know what to wear to make Andie MacDowell want to meet us in Paris in the park at night.

And so it comes to be that the season that’s been forever struggling with its propensity for geniality comes to a climax in a lip synch pitting the talented but inconsistent queen who can’t seem to stop throwing her sisters under the bus against the ragtag but upbeat queen who’s quite factually impossible to dislike. And it’s a lip synch to “Macho Man,” which automatically gives transgender-identifying Peppermint carte blanche to embrace the duality at play in every level of this competition. And does she ever, wildly swinging her arms to the lyric “He has a funky walk” like George Jefferson. (The gender flips even emerge through Freudian slips, as when Michelle Visage mistakes Peppermint’s note-perfect interpolation of Janet Jackson’s hip-hop hieroglyphic arms from the “If” music video for MC Hammer.)

Alexis isn’t exactly whiffing it throughout the lip synch, but repeatedly the eye’s drawn to what’s going on behind her, as Shea and Sasha sway in perfect harmony like blissful Village Backup Dancers. It’s a room filled with conviviality, and Ru embraces it, sending home Alexis, the season’s last remaining malignant cell, to go stew about it. Honestly, sorry not sorry.