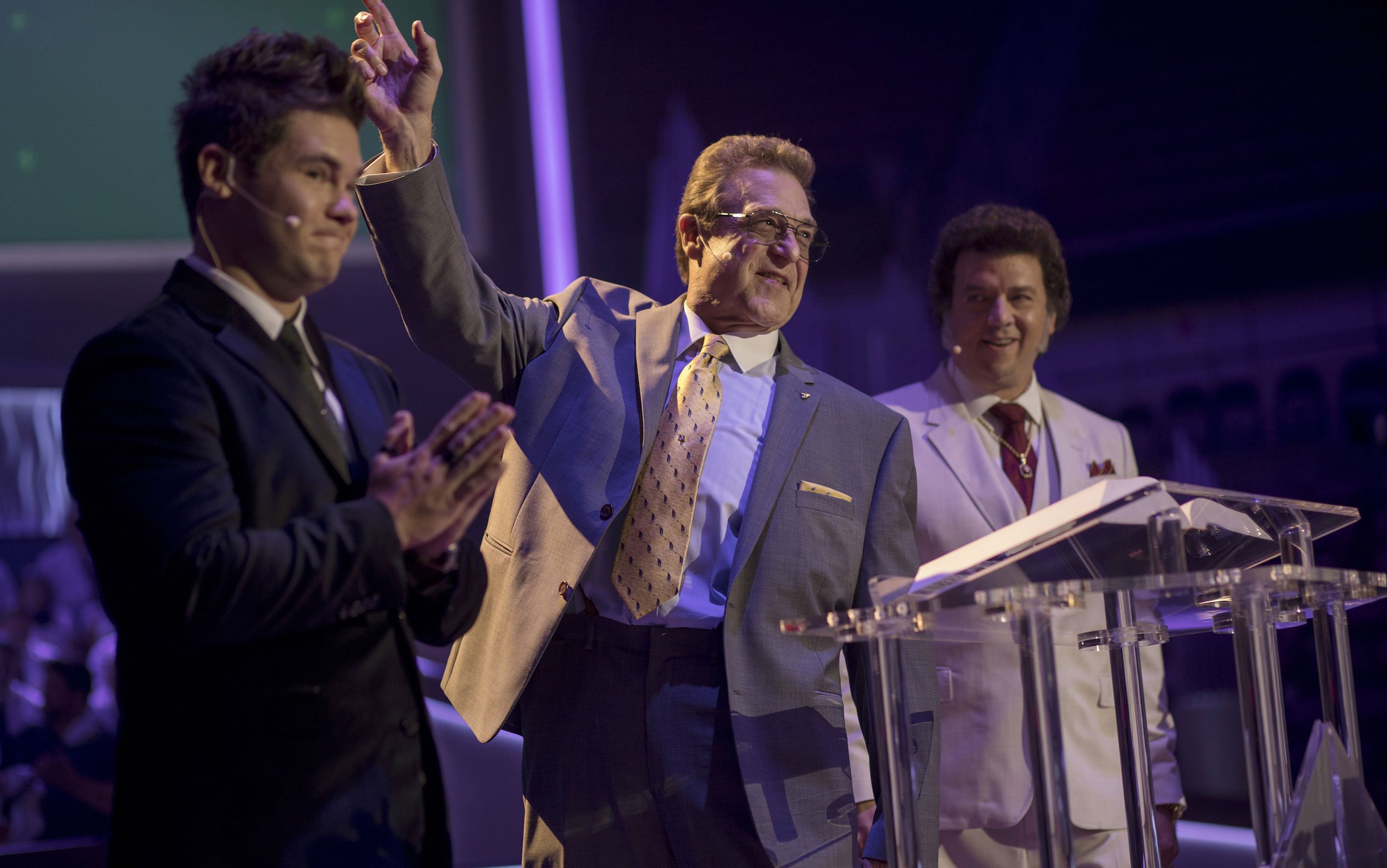 One could frame the premise of The Righteous Gemstones as a question: What if Danny McBride played another unduly self-assured dolt overflowing with machismo—but this time a pastor? Created by McBride, the series initially seems content to coast on the humor of that premise. But it gradually cracks the cynicism with which it frames its characters and their work, offering poignant glimpses into their inner lives. Despite its proclivity for forced, flat subplots, The Righteous Gemstones is a compelling and humanizing study of its characters, the faith they profess, and the world they strive to proselytize.

The series follows the Gemstones, a Southern family of televangelists as successful as they are crass, avaricious, and blasphemous. Led by widowed patriarch Dr. Eli Gemstone (John Goodman), whose network of mega-churches generates millions of dollars a day, the three Gemstone kids help run the family business: prodigal son Jesse (McBride) and boyish goof Kelvin (Adam DeVine) are pastors, while Judy (Edi Patterson) works behind the scenes, her dreams of preaching stifled by a tradition of misogynistic paternalism.

The myriad tensions that boil between the Gemstones are the source of much hilarity, but the show’s non-familial conflicts vary in the quality of their execution. Kelvin’s mission to save the soul of a big donor’s teenage daughter—she parties, curses, and has sex—benefits from its short-and-sweet screen time and inclusion of Kelvin’s right-hand man, Keefe Chambers, an ex-Satanist played by Tony Cavalero, who infuses Keefe’s awkward, deadpan drawl with bewitching earnestness. There’s also the escalating turf war with John Seasons (Dermot Mulroney), the pastor of a parish in which the Gemstones open a new worship center led by Baby Billy (Walter Goggins), Eli’s conniving and just-shy-of-smooth brother-in-law. But most prominent is the far too time-intensive blackmailing of Jesse, a central storyline that almost never warrants the space devoted to it, thanks to its particularly sluggish pacing and the shallow characterization of the lead blackmailer, Scotty (Scott MacArthur).

As the season progresses, the flimsiness of the blackmail plot is rendered all the more conspicuous by the strength of the show’s intra-family drama. Eli has been in a perpetual state of mourning since the death of his wife, Aimee-Leigh (Jennifer Nettles), and his grief distances him from his children, who are constantly at each other’s throats. After the first episode, which suffers from stilted writing that leaves the Gemstone siblings’ relationships feeling rather inorganic, the series settles into a delightful groove of caustic one-liners and the sort of McBrideisms—from characters’ confoundingly lofty language to their intense, unwarranted self-seriousness—that permeate the writer-actor’s work with longtime collaborator Jody Hill. After calling a meeting and, at its start, playing an excruciatingly prolonged series of notes on a xylophone, Jesse says, “Music has always soothed my vicious temper,” with McBride delivering the line wonderfully aware of his character’s ridiculousness. The whole cast pulls from McBride’s playbook and demonstrates similar comedic deftness as their characters add to the show’s manic verbal storm of insults and misplaced haughtiness.

For all the glee that it derives from the cruelty of its characters, though, The Righteous Gemstones refuses to damn them outright. It quietly gives the audience reasons to sympathize with the family and the people in their orbit—or, at least, to feel something closer to sympathy than antipathy: Jesse’s bedtime kisses on his kids’ foreheads; Kelvin’s wholehearted acceptance of Keefe; Judy’s frustration with the family’s sexism; Baby Billy’s wrathful reminder to Eli that he was Aimee-Leigh’s brother before Eli was her husband. These people, the series suggests, might not be charlatans. They seem to believe in what they’re doing, merely practicing their faith, albeit loudly and passionately and opulently. They’re chasing genuine Christian goodness as they conceive it, however dubious that conception may be.

All of the Gemstones have moments of vulnerability, but the series is at its kindest, and most poignant, when exploring Eli’s grief. If his motivations don’t serve God, it’s because they serve Aimee-Leigh, whose memory he labors to honor. At one point, Eli sits alone at a candle-lit dinner table, facing a portrait of him and his late wife. He speaks to her, his tired baritone reaching for nothing, resounding in the silence. Later, after getting into a dust-up with Judy, Eli watches her sing and dance onstage alongside Baby Billy. She’s talented, like her mother was. Eli looks on, smiling for a moment longer than he usually does. The scene’s use of slow motion allows his joy—as well as Judy’s—to last for ages. It’s a stirring, cathartic image that reveals the Gemstones’ squabbles for what they truly are: trifling, fleeting things.