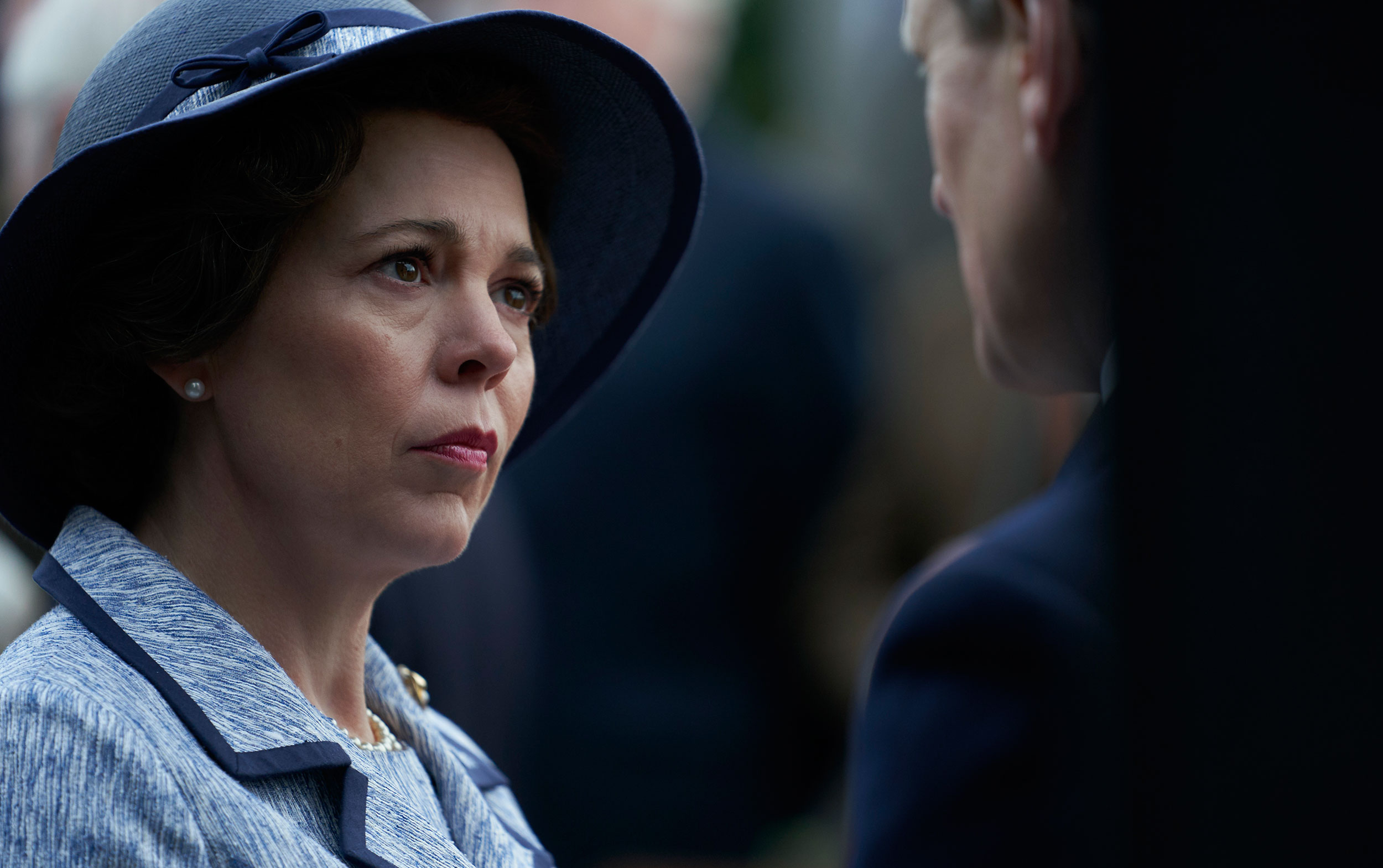 Season three of The Crown lacks the urgency that previously made the Netflix series so engaging. This is partly due to the more subdued relationships between the older members of the House of Windsor, now settled into their various roles as sovereign, husband, sister, and wife. Only a few years have passed between seasons, but Queen Elizabeth (Olivia Colman), her husband Philip (Tobias Menzies), and sister Margaret (Helena Bonham Carter) have accumulated a deep weariness that can be enervating to behold.

This season, the countercultural politics of the Swinging Sixties nurtures a new sense of awareness around the myriad hypocrisies and criticisms of aristocratic life. The series homes in on both economic inequality and the growing chasm between royal expectations and public norms, with the British crown’s traditional nonpartisan position becoming increasingly detrimental to its image. The antiestablishment spirit of the time seeps into Buckingham Palace via the small rebellions of Princess Anne (Erin Doherty), now a miniskirt-wearing, David Bowie-loving young woman. And it’s through her that the monarchy makes small but significant steps toward changing its perception as an outdated institution.

The Crown’s first two seasons tapped into the allure of a world insistent on formality. The ‘60s, though, bring a new set of societal challenges that redefine the relationship between the Windsors and their American counterparts, especially in the episode “Margaretology,” in which Margaret takes a tour of the States. Her spontaneity and charisma—the very qualities that make her a liability to the monarchy’s rarefied image—help Elizabeth to win over President Johnson (Clancy Brown), who dreads the codified etiquette that dictates their countries’ “special relationship.” Johnson doesn’t care about exclusive invitations to Balmoral Castle; he’s happy with dirty jokes and drinking contests that fly in the face of royal protocol.

The crown’s relationship to the British people is also changing, as highlighted in “Bubbikins,” which chronicles the impact of the infamous 1969 BBC documentary Royal Family. One of Philip’s public relations projects is to make the Windsors seem more appealing to the masses, but in his vanity, he fails to understand the importance of mystery and ritual to their public image. Royalty is the ultimate spectacle, and The Crown valiantly attempts to illuminate the psychological and emotional toll it takes on those who have little control over their lives. But it’s more than a little difficult to feel sympathy for the royals when the prince consort is seen trying to explain why the queen deserves more taxpayer money.

Despite Philip’s efforts to sweeten their image, the Windsors’ most likeable member is as un-royal as it gets: his mother. At turns fragile and fearless, Princess Alice (Jane Lapotaire) is a welcome mid-season addition, providing a much-needed contrast to her son, who’s still itching to find meaning in his life. Where Alice is selfless and warm, Philip is consumed by the need to micro-manage everything around him. As the younger Philip in the show’s first two seasons, Matt Smith was palpably angsty, but in Menzies’s hands, the neurotic prince is drawn ever inward. And a highlight of the new season is an entire episode concerned with his midlife crisis. Set during the events of the 1969 moon landing, “Moondust” is a sensitive exploration of masculine insecurities, and in no small part for the way Menzies calls upon reserves of pathos to chart his character’s miserable descent into self-pity and spite.

The most prominent thread running through The Crown’s third season is the dualities in people’s lives. It’s in the juxtaposition of the royals’ public and private selves, the ever-present chasm between aristocratic and common society, or the much more personal struggle of characters reconciling individual desires and duties. There’s plenty of fertile ground to explore this dynamic, as almost every character is in a state of conflict, from Elizabeth, who struggles to show genuine humanity to her people, to Prince Charles (Josh O’Connor), who reckons with his destiny as the future king. Within their rigid world, the royals pursue their desires in their own little ways—Charles with his love of the performing arts, Elizabeth with her beloved racehorses at Sandringham, Anne with a casual fling that surprises her family.

Toward the end of the season, even Margaret has a fleeting taste of happiness outside of the public eye, before getting sucked back into the vortex of her unhappy marriage. It’s impossible for the Windsors to fully escape the demands of the crown; several extended family scenes see even the most individualistic characters obediently falling in line. Elizabeth is ultimately the only character who digests and accepts this reality without much drama. Colman brings a hard-won confidence to the queen, who weathers changes and hard decisions with the mettle of a ruler who recognizes the importance of self-reliance and stability.

The title of the season’s first episode, “Olding,” is a play on Elizabeth’s age (and the code name of a K.G.B. spy), setting the tone for the queen’s private musings on the trajectory of her reign. The episode is an exploration of appearances and what they conceal, with a number of pieces of fine art and literary metaphors hammering that point home. During a pivotal moment in the season premiere, the Surveyor of the Queen’s Pictures, Anthony Blunt (Samuel West), gives an overblown lecture about the layers of deceit and multiple meanings lurking within Renaissance art—and the moment is followed by a longwinded scene that overcomplicates an otherwise simple allegory about hidden identities and trust.

The Crown presents a network of relationships that are more meaningfully connected by ringing telephones, newspaper headlines, letters, and electric buzzers than face-to-face communication. The show’s royal family is “alone together,” settled in their identities and the demands of their station. Philip only reconciles with his mother after reading an article about her in the papers, and one of the season’s most heartening scenes depicts Alice and Philip walking arm-in-arm together in the gardens of Buckingham Palace. Young Elizabeth once confronted Philip about what he does and where he goes, but she’s since risen above these small concerns. Given the queen’s inability to show her feelings, it’s fitting that the season closes on a note of solitude and isolation. In her own words, “One just has to get on with it.”

Review: Servant Is an Unrelentingly Strange Examination of Grief and Denial

Review: For All Mankind Prioritizes Cynical Alternate History Over Character