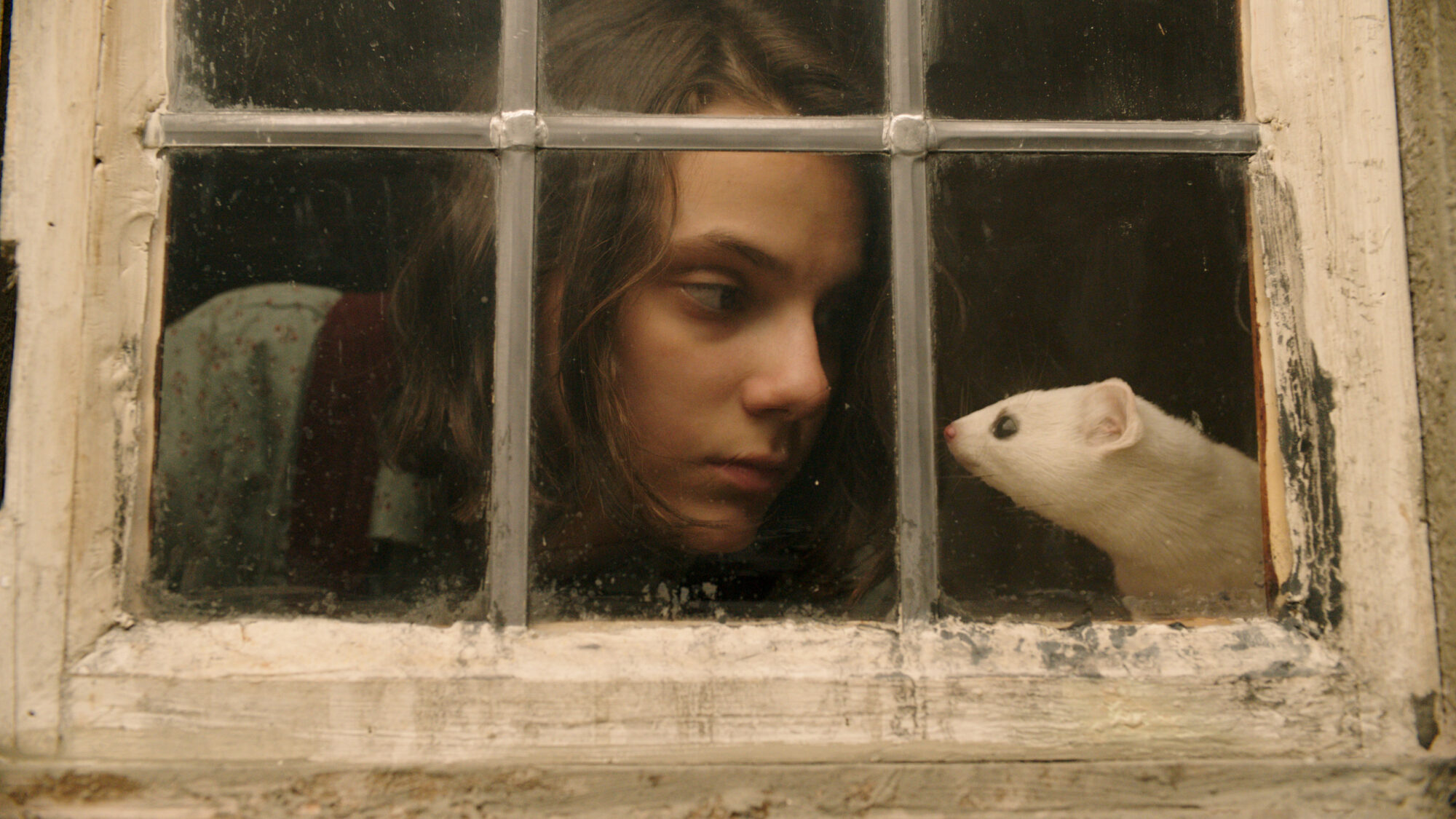 HBO’s His Dark Materials is a beautifully orchestrated reminder that there’s life after Westeros, albeit with airships, science, and sensible sweater vests. The first of Philip Pullman’s iconic trilogy of novels springs to life in the show’s first episode, “Lyra’s Jordan,” effectively erasing the memory of Chris Weitz’s 2007 film adaptation of The Golden Compass, which failed to embrace the depth of the universe Pullman created.

Dafne Keen slips naturally into the role of orphan Lyra Belacqua, who’s eager to explore beyond her home at Jordan College in an alternate version of Oxford. The actress brings a bristling restlessness to the young girl, who’s much more into stealing wine and sliding down rooftops than reading books and doing chores. In this world, all humans have talking daemons, physical manifestations of their souls that exist outside the body as animal companions. Children’s daemons don’t take on a fixed form until their humans reach puberty, so Lyra’s daemon, Pantalaimon (Kit Connor), constantly morphs between a moth, wildcat, ermine, and a blur of other creatures. It’s a heavy-handed metaphor for coming of age, but it lays a crucial foundation for the story’s existential exploration of knowledge, individuality, and truth.

A visit from Lyra’s absentee uncle, Lord Asriel (James MacAvoy), throws her life into chaos. Asriel is cold and calculating, showing cool indifference even when Lyra saves his life. However effective MacAvoy is in his five minutes of screen time, though, he’s ultimately forgettable—unlike Ruth Wilson, who unfurls like a carnivorous plant as Marisa Coulter, a powerful “friend of the college” who hires Lyra as her assistant and takes the girl to London. Wilson’s performance is a study in expertly controlled layers barely concealing a well of rage and cunning; there’s also the inscrutable face of Mrs. Coulter’s golden monkey daemon, an unnerving extension of her formidable will. In episode two, the full thrust of this relationship is on full display in a traumatic incident involving the monkey and Pan, while in episode four, a wickedly primal scene blurs the line between Coulter and her daemon.

Jack Thorne, who adapted the series from Pullman’s trilogy of novels, takes a balanced approach to world-building without drowning the audience in minutiae. The version of Britain imagined by the series is ruled by the Magisterium, the theocratic government that clashes with colleges that provide traditional academic sanctuary. Given the anti-intellectual inclinations of current real-world politics, it’s frustrating to watch the long arm of the law curl around those that would challenge it, even within its ranks. Thorne generally does well at crafting dialogue that reveals thoughtful bits of backstory, as well as the sociopolitical context of the characters’ struggles. Given that there are so many elements to cover—such as the concept of Dust, which consists of subatomic particles that tend to gather around adults, which the Magisterium views as controversial, even heretical—Thorne pares down the novel’s science-magic descriptions without diminishing their importance.

Expository scenes detailing the history, science, politics, and arcana of the show’s alt-Britain might be necessary to understand the machinations of this world, but they’re at times weighed down by clunky dialogue, as in a scene in which Ariyon Bakare’s Lord Boreal circles around a Magisterium priest, threatening to reveal his depravities if he doesn’t help him. But where the writing can drag, the show’s visual style is efficient, as in the warm, earthy textures associated with the downtrodden and the sleek jewel tones that mark the powerful. Familiar motifs, from the foreboding pseudo-Brutalist architecture of London to classically framed scenes depicting the apron-clad laundrywomen and busy servant class at Jordan College, succinctly key us into the power dynamics of this universe. And while the show’s retro-futuristic setting hews to a mainstream steampunk aesthetic—a genre that’s historically rife with European colonial associations—it’s encouraging to see a diverse cast, including Bakare, Clarke Peters (as The Master), and Lucian Msamati (as John Faa), playing characters in positions of power.

The main catalyst for the story of the show is the kidnapping of the children of Gyptians, a semi-nomadic people who live in houseboats, bringing simmering class politics to a near-boil, especially when evidence leads back to the Magisterium. In its timely depiction of a grassroots investigation into the disappearance of vulnerable children, His Dark Materials invites comparisons to the banal acts of evil that flourish in a corrupt system. At one point, Mrs. Coulter visits the children to help them write cheery letters to their loved ones before they’re brought northward, and the camera follows their slight frames down a dank, narrow hallway. In this moment, the visual allusion to concentration camps is unmistakable.

Thorne’s character development falters slightly in the scenes set in Trollesund, a gateway port to the north, home of armored bears and as-yet-unseen witches. Throughout, Lyra’s small victories here are almost effortless: She wins over the exiled bear Iorek Byrnison (Joe Tandberg) a little too easily, and Byrnison, while suitably gruff and jaded, comes off as a one-dimensional outcast with little at stake. And it’s in Trollesund where the audience is introduced to the tedious theatrics of Lin Manuel Miranda, thinly disguised as a Texan aeronautist named Lee Scoresby. It’s an ongoing struggle to get past Scoresby’s overcooked Texan accent and constant rambling, and he ends up more caricature than comedic relief.

His Dark Materials underlines the loss of creativity and boldness that marks the transition from childhood to adulthood. As Lyra intuitively learns to read her alethiometer—an arcane truth-telling device that requires years of study—she starts growing into her own identity. Keen shines when she’s at her most defiant, giving stubborn, righteous life to a child struggling to understand the complexities of the real world. At the end of episode four, the series has barely begun to unpack its more fantastical elements, instead choosing to draw us into its well-rounded interpersonal relationships and emotional connections, all of which add an extra sense of profundity to an otherwise straightforward coming-of-age story.