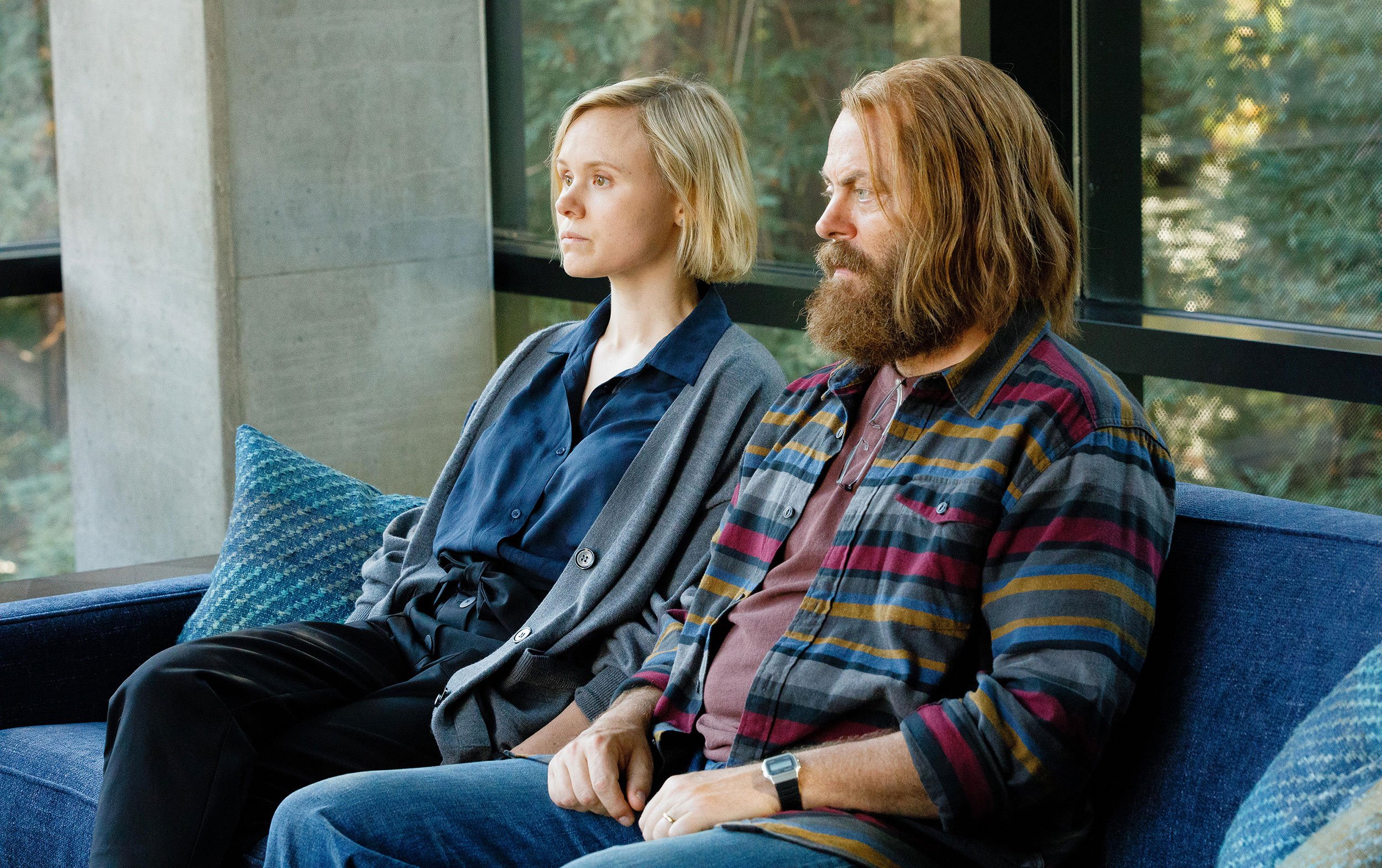 The show’s title alludes to the deliberately generic, misleading name of a supercomputer capable of peering into the past and predicting the future, a MacGuffin that allows for a treatise on determinism. Using quantum algorithms, Forest (Nick Offerman), the mysterious owner of a computing company named Amaya, can trace the chains of cause and effect that guide our lives beneath the illusion of free will. Or, as Forest himself says to a new programmer, Sergei (Karl Glusman), our lives aren’t chaotic, but rather ordered “on tramlines.”

Sergei is swiftly revealed to be a corporate spy who infiltrated Amaya to steal code for Russia. Outed almost immediately, he finds himself confronted by Forest and Amaya’s head of security, Kenton (Zach Grenier), who kills the would-be thief and stages his death as a spectacular suicide, much to the confusion and grief of Sergei’s girlfriend, Lily (Sonoya Mizuno), a software engineer at Amaya who sets about digging into the truth.

At first, Devs’s straightforward murder mystery and broader philosophical questions dovetail seamlessly. Lily’s amateur sleuthing around Amaya’s compound and a thoroughly gentrified San Francisco positions the series as pure noir, a genre quite conducive to exploring existential and metaphysical quandaries. It’s especially fitting for a consideration of determinism, with Lily’s attempt to work out what happened to Sergei aligning with the supercomputer’s ability to reconstruct the past based on behavioral clues. This represents the ultimate endpoint of technology’s capability to reshape humanity’s self-conception, demonstrating that you can program software so intricately that it can disprove free will. As Lily struggles to make sense of her life being turned upside down, Devs regularly returns to Forest and his sedate, wizened calm, that of a man who sits upon the mountaintop and sees all.

Garland, as ever, devotes a great deal of care to the show’s sense of atmosphere. Set in and around Silicon Valley, Devs reflects the modern look of the tech industry in much the same way that Spike Jonze’s Her used hazy, soft lighting and warm colors to evoke the sleekness and comfort of Apple’s aesthetic. People arrive at Amaya’s main building, all glass windows and open desks, as if to a college campus. The Devs building itself, with its Brutalist exterior and series of cube-shaped rooms and gold-lined walls, is a radical break from reality that nonetheless manifests the internal logic of tech culture. At heart, it’s a giant computer that programmers work within, a windowless space where humans are at once spying and being spied upon in an extreme visualization of our surveillance society.

This initial synthesis of aesthetic, plot, and subtext slowly starts to pull apart, however, as Devs drags into its second half. Garland frontloads the series with narrative exposition, revealing to the audience (and Lily) most of the mystery behind Sergei’s death, the depth of his clandestine connections, and the totality of influence that a mega-rich CEO like Forest can exert in the late-capitalist Shangri-la of Silicon Valley. That leaves the series to start spiraling into stranger and ever more forced twists, from an awkward romantic subplot between Lily and her cybersecurity ex, Jamie (Jin Ha), to Kenton’s increasingly ludicrous omnipresence and seeming invulnerability to physical harm (one starts to expect a Westworld-like twist to reveal him as a robot). Similarly, Forest’s motivating obsession over his lost child is telegraphed by the colossal statue in the girl’s image that looms over the Amaya compound.

Early on, the balance between open discussion of Devs’s themes and the use of setting and tone to convey said themes is a careful one, but soon the series gives itself over to long-winded monologues that make the subtext text. The later episodes grind to a halt as the contours of a philosophy that were already neatly summarized in the pilot are more arduously explained to viewers. The series momentarily rebounds when it starts to consider the role that chaos plays in shaping the supposedly absolute tramlines of existence, using clever editing and doubling effects to show all the various permutations that any given moment of a person’s life could have gone depending on small variations of behavior. Soon, though, this provocative visualization of unpredictability and random chance gives way to characters standing around debating such ideas, reducing the surreal to the academic.

Devs frustratingly comes too sharply into focus at the expense of leaving some of its more evocative ideas unsaid. The story’s metaphors become increasingly obvious, such as Forest’s long hair and beard turning him into a cult-like leader, an image regularly juxtaposed with his team’s repeated projections of Christ’s crucifixion. As the show’s visual storytelling is increasingly subsumed by explanatory dialogue, the more tragic insinuations of Forest’s obsessions become lugubriously spelled out as others tie the Devs project ever more explicitly to his personal trauma. There’s plenty to chew on in Devs, but the protracted serial format robs Garland of his best trait, of knowing when to let the audience fill in the gaps on their own.

Review: In The Virtues, Transience Is a Path to Personal Redemption

Review: HBO’s The Plot Against America Offers a Flattened Take of a Prescient Novel