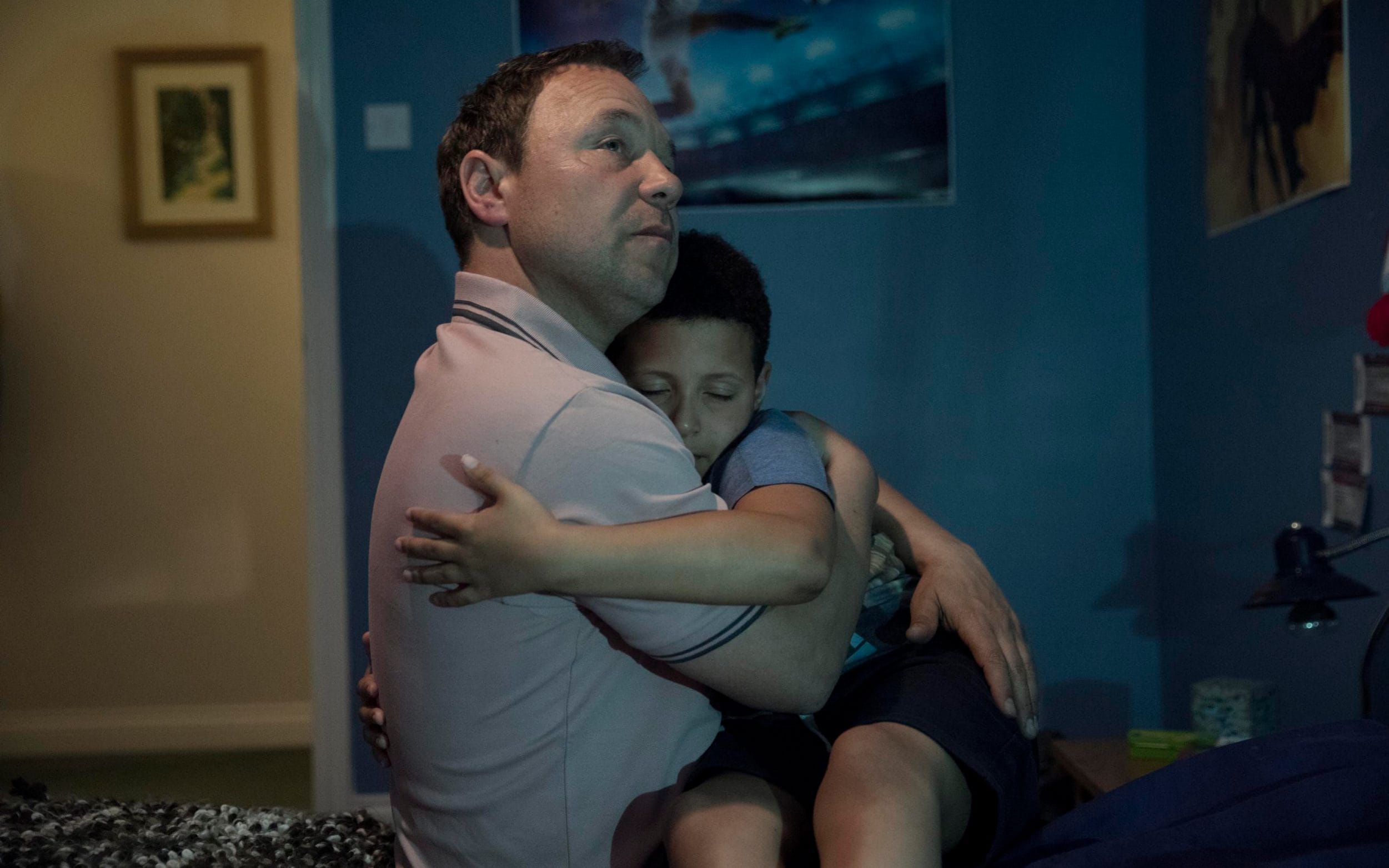 Transience is a recurring motif in Shane Meadows’s The Virtues. The four-episode series is filled with scenes in which recovering alcoholic Joseph (Stephen Graham) trudges through city streets and countryside roads toward an uncertain future. Unmoored after his ex-wife, Debbie (Juliet Ellis), announces that she’s moving with their son, Shea (Shea Michael Shaw), to Australia, Joe relapses in a big way. Seeking to regain some hold of his life, he decides to return to his native Ireland to track down his sister, Anna (Helen Behan), whom he hasn’t seen since he was sent to an orphanage after their parents’ deaths. Joe’s return home triggers confrontations with traumatic memories warped and repressed by time, suggesting that the only way to overcome one’s past is to confront it head on.

Meadows’s work as a filmmaker has charted how misery and hopelessness manifests in post-imperial Britain. He’s always had an intuitiveness that transcends the ostensible realism of his desaturated palettes and handheld camerawork, and here he shows a new level of aesthetic subjectivity. When Joe is sober, his tremors rhyme with the shaking of the camera; when Joe drinks, however, the camera turns sedate, swaying more slowly as the relief of intoxication washes over him, followed by sudden, erratic cuts when he inevitably blacks out.

Meadows visualizes Joe’s repressed memories with snatches of home-video-grade images of the man’s childhood. The blotchy, low-resolution of the video, redolent of Harmony Korine’s early work, manifests Joe’s hazy grasp on his past, and the escalating intercutting of such clips with the present-day material as the series progresses mimics the overwhelming rush of his recalling the full extent of his trauma. Meadows parcels out this footage with precision, teasing us with the indecipherable images until what’s being depicted becomes all too clear.

As nervous as Joe is in conversations with others, he’s also quick to befriend strangers. And he has a special affinity for children, at once playfully immature and genuinely tender and caring toward them. In his farewell with Shea, Joe humbly reassures him that it’s okay if he calls his stepfather, David (Vauxhall Jermaine), “dad.” Like many an addict, Joe can be overwhelming and caustic, but Graham foregrounds the man’s unending attempts to tamp down his worst impulses, focusing less on Joe’s capacity for overbearing behavior and more on his shame and ability to charm people in spite of his withdrawn, nervous energy.

As the series progresses, Joe’s struggles are contrasted with other characters dealing with their own suppressed issues. His sister-in-law, Dinah (Niamh Algar), is introduced as a brash, sarcastic self-starter who can punch out any man who hassles her, but she nurses a brooding shame over having to give up a baby she had as an unwed teen. Meanwhile, Joe gets a job at his brother-in-law’s (Frank Laverty) construction business, where he meets Craigy (Mark O’Halloran), a tetchy worker with a checkered past who remembers living with Joe in the orphanage as kids. Craigy is even more of a nervous wreck than Joe, often barely able to get to the end of a sentence without circumnavigating the globe to get to the point. Joe and Craigy are kindred spirits, as they understand each other’s pain, but they’re also triggers for one another, leading to as many moments of strife as camaraderie.

With This Is England and its various TV spinoffs, Meadows tracked the political and social upheavals of modern England through an intimate network narrative of closely entwined stories. The Virtues isn’t particularly concerned with the political history of Ireland, but rather the lingering pressures of the religious shame and abuse that shape addled individuals. The finale brings the tacit influence of such personal and institutional manipulations into clarity along with the full extent of the characters’ trauma in a tautly edited climax that bridges Joe, Dinah, and Craigy’s struggles into a series of tense confrontations in which grace is either bestowed or brutally withheld. Like much of Meadows’s work, the series has a clear ending, but the characters remain irresolute. It’s a reminder that even facing up to one’s problems doesn’t guarantee release, but it does at least allow for the possibility of moving forward.

Devs Review: An Exposition-Heavy Rumination on the Nature of Humanity