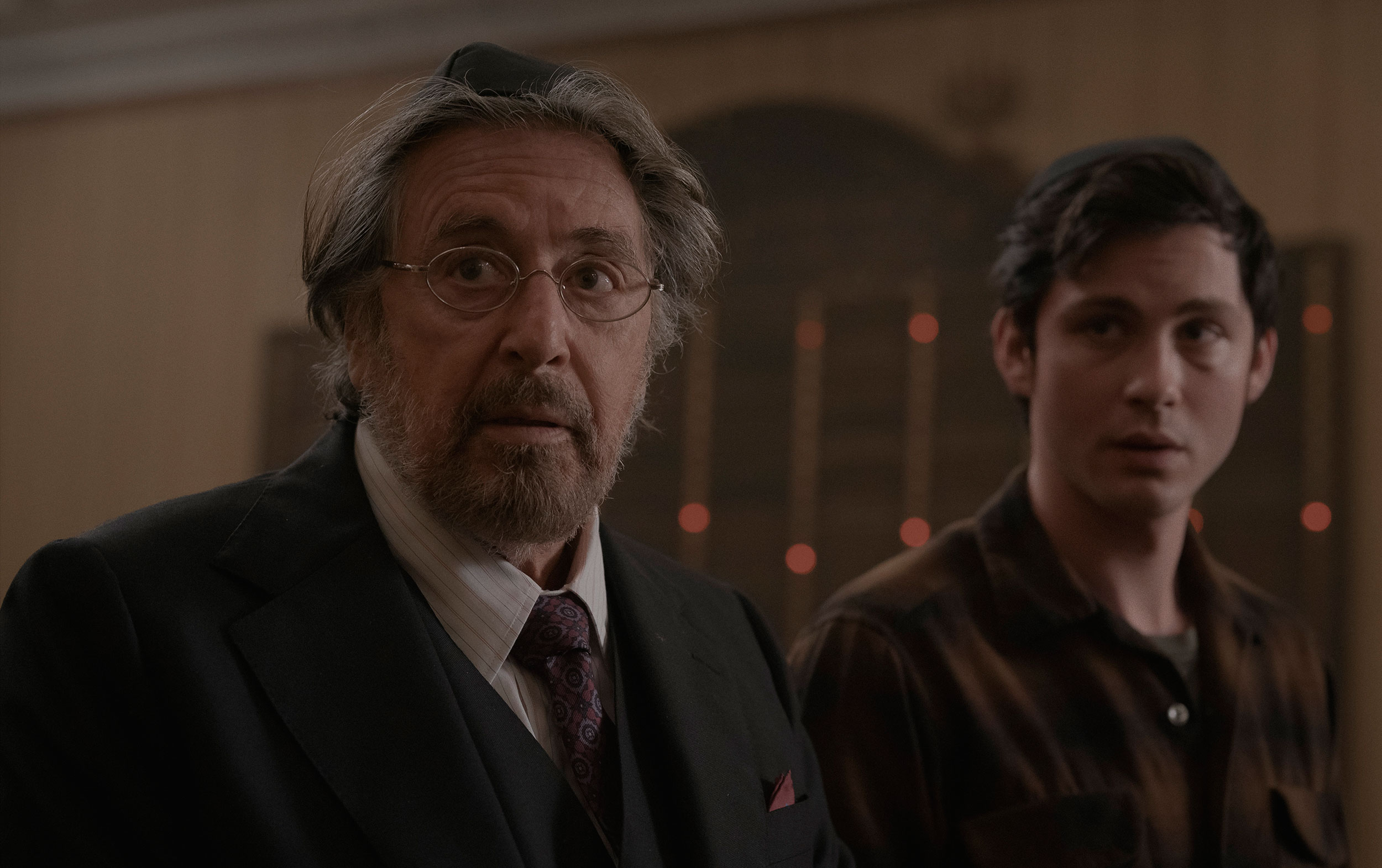 Following a group of vigilantes in hot pursuit of Nazis living in 1977 New York, Amazon’s Hunters is so ploddingly manufactured from familiar parts that it feels like it was spat out by an algorithm. The show’s setting provides no shortage of bright, hokey Americana and ironic needle drops set to bloody violence. The late ‘70s is long enough ago to evoke nostalgia while simultaneously nodding toward our enduring obsessions, as the characters make reference to Star Wars and rarely shut up about various superheroes.

Comic store clerk Jonah Heidelbaum (Logan Lerman) has that most time-tested of motivations for seeking vengeance: avenging a dead woman. Unbeknownst to Jonah, his grandmother, Ruth (Jeannie Berlin), worked in a Nazi-hunting crew with her fellow Holocaust refugee, Meyer Offerman (Al Pacino). After Granny is mysteriously murdered, Jonah learns of her double life and joins up with Meyer’s ragtag band of vigilantes in pursuit of justice.

Meyer’s crew is a diverse bunch, made up of young and old alike. As the youngest, 19-year-old Jonah is considered something of a liability due to his inexperience, as well as his tendency to let his emotions run high. So begins the usual adjustment period for the proverbial hothead, in which he learns to fight while doing the expected bits of soul-searching once he discovers that killing people is, in fact, a messy business. More excruciatingly predictable flourishes follow: Somebody tells him relationships are baggage, someone else refers to Meyer’s group as “judge, jury, and executioner,” and an F.B.I. agent (Jerrika Hinton) naturally sniffs around, potentially mucking up the works of their well-oiled Nazi-hunting machine.

None of this is a jumping-off point for some complex meditation on vengeance, as the series largely consists of scenes of ironical Nazi comeuppance sandwiched between the sort of uninspired character drama where people wash blood off their hands while discussing the powers of good and evil. The show’s investigative segments are so obvious that they border on laughable, since the Nazis leave things like their medals and trophies of Jewish children’s teeth lying around (there’s even a jovial photo of one character hanging out with Adolf Hitler).

At certain points, Hunters seems like it’s trying to evoke the comparatively simple storytelling of early comic books or exploitation films of the ‘70s era like, say, Death Wish. Cutaways place the characters in fake movie trailers with superhero-esque names, using bursts of comedy and karmic violence to create a somewhat heightened tone. But the series never reconciles these rather sporadic moments of levity with its default mode of turgid drama, where Jonah broods about what he’s done or how he’s affecting the people closest to him.

Though the series doesn’t shy away from depicting how Nazis dehumanized Jews, it also feels the bizarre need to cartoonishly heighten those atrocities. In flashbacks, we see concentration camp prisoners forced to serve as literal pawns in a human chess game, stabbing one another to capture a “piece.” Another camp broadcasts a live singing contest over the speakers, with losers eliminated one by one. Where Inglourious Basterds and even the recent Wolfenstein games manage to ground their flights of fancy in unexpected sincerity and tragedy, Hunters traffics in insipid dramatic cliché. The result is by-the-numbers drama that veers every so often into baffling pulp, as though the series is cobbled together from mismatched parts.

Hunters clearly aims to be subversive and of the moment, but its every element feels so calculated as to be nauseatingly safe. Its villains are broadly acceptable targets, its moral conflict feels obligatory, and its forward-facing monologues about diversity seem designed only to mark off a checklist. The series makes the occasional gesture to present-day politics, as when one character incongruously name-checks “false news,” but it’s otherwise content merely to skim the surface of these parallels in service of an easily marketable premise. Though clearly gifted with more time and money than any of the exploitation films it references, Hunters has only a fraction of the things to say.

Review: Netflix’s I Am Not Okay with This Mostly Transcends Its Familiar Concept