“What I’d like to show you now is a full meal,” Kyle MacLachlan (as himself) intones in his ironic introduction to Portlandia’s hour-long Brunch Special. The speech is one of the high points of this extended version of the season-two finale, sending up filmmakers who extol their own self-indulgent creative choices in the name of what’s sometimes euphemistically referred to as a “director’s cut.” Unfortunately, the rest of the episode is largely marred by the same dissipation that’s being parodied, resulting in an overlong rerun of Brunch Village with enough filler to stuff a dozen marionberry pancakes.

Portlandia depends even more heavily on timing and surprise than heavily scripted and urbane comedies. Unfortunately, most of the added footage adulterates the kinetic banter between the show’s stars, Fred Armisen and Carrie Brownstein, as they’re drawn to a new brunch restaurant along with a mob of other trend-hopping yuppies. The amusing addition of a “master cleanse” health-trend victim who faints from hunger and falls in love with a doctor is the only truly notable addition to the original story, which remains largely intact. The additional five minutes of runtime are mainly fashioned from tweaked dialogue and additional breathing room in scenes that would have been better served with the show’s signature ricocheting spontaneity. Portlandia’s cartoonish sound effects and music cues continue to cement its status as one of the few comedies to test the limits of excess so triumphantly, but while both gimmicks still get laughs in the re-edited version, the overall rhythm suffers from the padding.

To lure customers, The Brunch Special comes with a second course that might seem tempting: a new behind-the-scenes mockumentary. The protracted sketch routine finds Portlandia director Jonathan Krisel (as himself) searching endlessly for the perfect marionberries to use in the final shot of the episode. In order for the cast to savor and enjoy the marionberry pancakes without having to fake their reactions, he must wait five months for them to come back in season, forcing the show to run seriously over-budget. The producer is at wit’s end as he struggles to scrape up additional funds and track down his director-at-large, all of which serves as ample comedic fodder for about 10 minutes (the entire saga lasts twice as long). Armisen tells the producer, “If you can’t get B-roll, get C-roll, and if you can’t get C-roll, get D-roll,” referring to secondary footage usually used for cutaway shots. It seems that some of the black-and-white handheld footage, whose loose patchwork-like quality is meant to parody cinema verité, might be drawn from G-roll.

Like the episode proper, in which eager brunch customers must stand for hours in line, the “behind-the- scenes” drama relies heavily on characters waiting around. But this time, there just aren’t enough jokes to reward the audience’s patience. The lighthearted jabs at the show’s network, IFC, which is referred to alternately as “deep cable” and cable with “three digits,” are probably enough to hold over the show’s most dedicated fans. But by failing to trim the fat, the special appears to commit the fallacy of imitative form, subjecting viewers to the same tedium that the crew members face as they await the return of their director. In an effort to avoid the same mistake, I’ll be brief: Portlandia is best served in 23-minute portions. 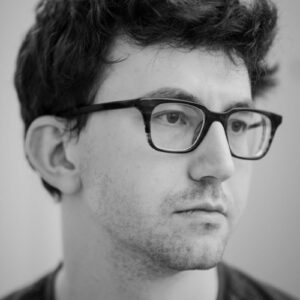 Daniel Goldberg is a colorist and filmmaker.