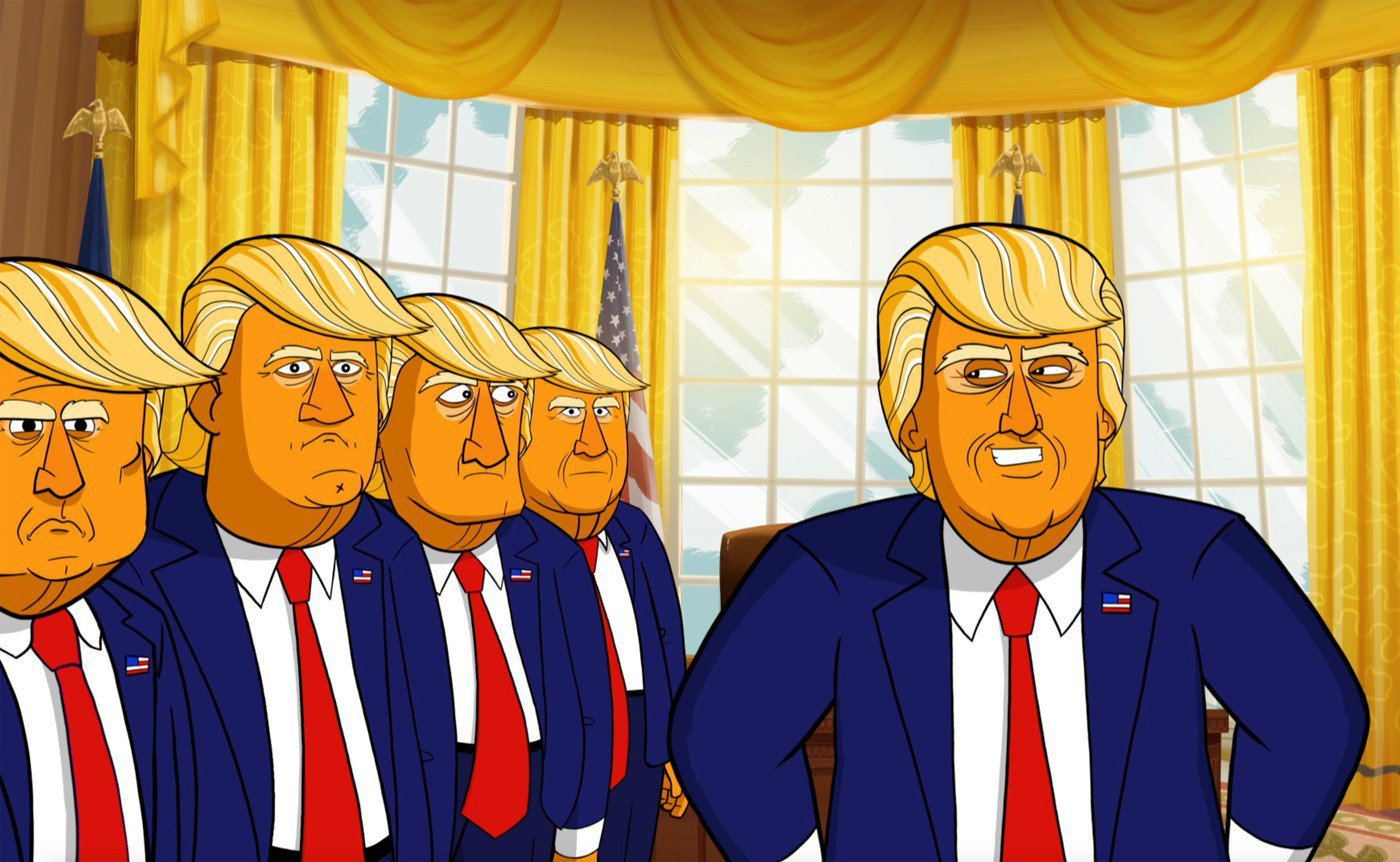 When they set out to create an animated satire of Donald Trump’s presidency, the creators of Our Cartoon President faced the challenge of effectively lampooning the president in a climate that is not lacking for Trump-bashing. Surely the animated genre could unlock novel ways to pick apart the president and his administration, but Our Cartoon President only contributes to a deafening echo chamber, reinforcing and repeating the jokes that inundate talk shows, sketch comedy, and our Twitter feeds. The series delivers trite material with inexplicable confidence, as if the writers were the first ones to recognize Trump’s love of Diet Coke and Fox & Friends.

Other well-trodden Trumpisms slip into the show’s first two episodes, which deal, respectively, with the State of the Union address and Trump (voiced by Jeff Bergman) responding to a natural disaster. In this age of the warp-speed news cycle, an animated series will have a hard time staying on top of the latest Trump scandal (though a few minutes of new material is added to each of this show’s episodes a few days prior to airing). As such, Our Cartoon President relies largely on character-based humor, cycling through familiar caricatures of Trump, his cabinet members, and his family.

The best jokes end up being the ones we haven’t already heard dozens of times, absurd as they may be. The pilot episode features a running joke about how Ted Cruz (James Adomian) is unfamiliar with the concept of brushing one’s teeth (“You’ve got hair on your teeth?”). Does it make sense? Hardly. But it’s a refreshing zinger compared to tired exclamations of “fake news” and oft-repeated jokes about Trump’s clownish appearance.

While political events and decisions are at the center of each episode, it’s the family-centric plotlines that keep the series moving forward. Perhaps, then, as a result of Our Cartoon President having more in common with a sitcom than a scathing political satire, the cartoon Trump fails to resemble the dangerous leader that he is in reality. Instead, he comes across as an oafish yet lovable dad. This characterization is especially true of the pilot’s B plot, wherein Trump struggles to come up with an anniversary gift for Melania (Cody Lindquist). Rather than try to unpack the pair’s icy relationship, the series treats the unorthodox first couple like characters in a Seth MacFarlane joint. When Trump, the put-upon dad, makes amends with Melania, the exasperated wife, at the end of the episode, it’s the sort of pre-packaged conclusion that might inspire a sympathetic “aww” from a studio audience.

Family drama also drives the B plot in season’s second episode, in which son Eric seeks approval from his father. Eric’s whiny voice and upturned lip may be one of the show’s more on-point caricatures, but within their roles of neglected son and uncaring father, each man feels as if he’s been infantilized. It’s a sympathetic portrayal of a family whose actual behavior errs on the side of fascistic. The series ultimately hinges on the premise that these people are innocuous doofuses and not insidious politicos. “Some are worried that this show might humanize me,” Trump says in the introduction to the first episode. Our Cartoon President’s greatest flaw may be that it does just that. Whether it’s aware of that misstep, however, is less clear.

Review: Here and Now: Season One