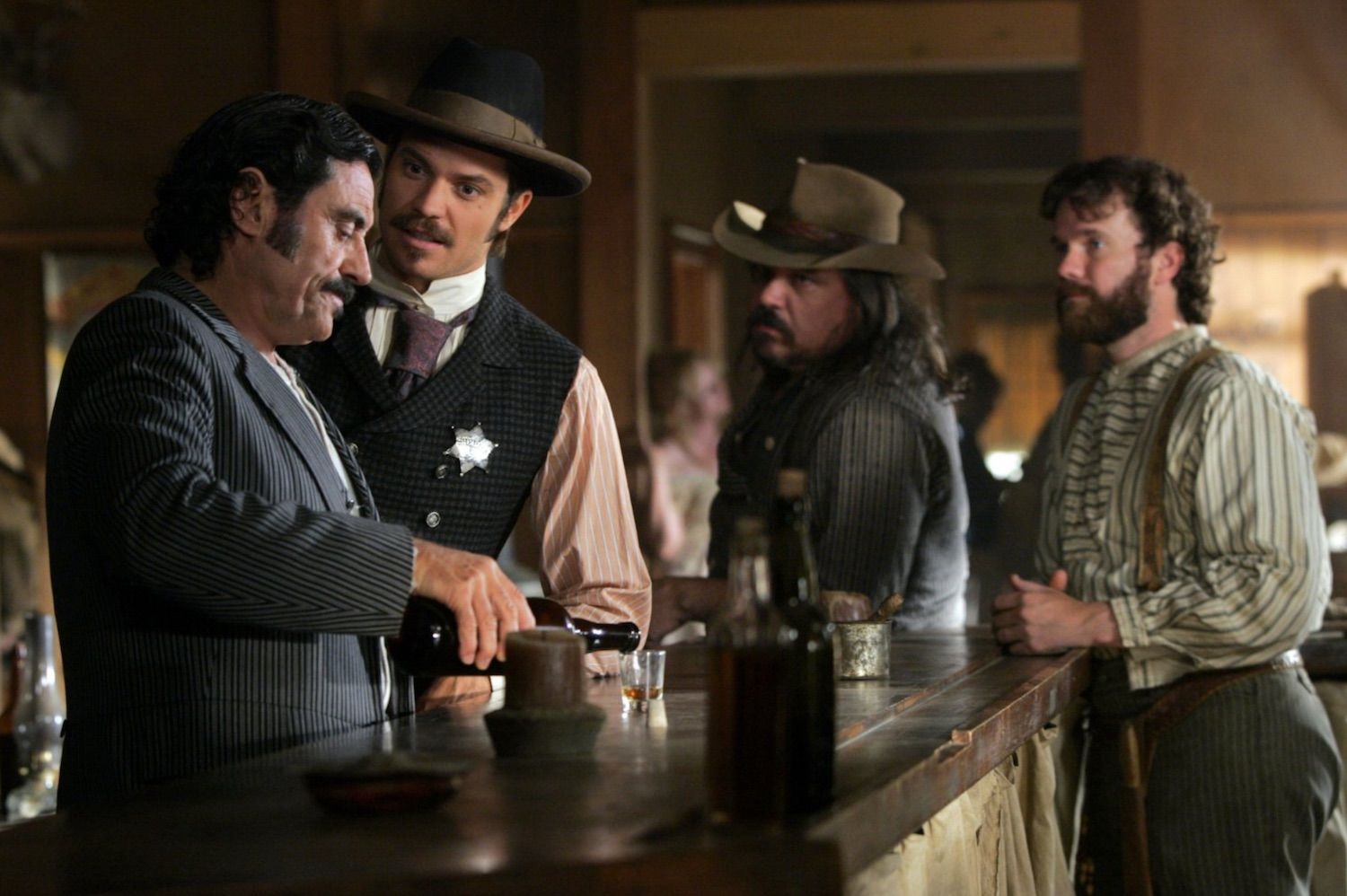 “No grand gestures, fucking Bullock, until I’ve had my talk with Hearst,” Al warns while trying to corral the fallout from Bullock’s beatdown of Farnum. Al’s paranoia is well placed, as grand public gestures of all kinds dominate Deadwood. In Season Three, though, fleeting looks and barely discernible gestures have assumed a growing place in the storytellers’ arsenal. They tell a story of their own, often one that contradicts the characters’ words.

In the season-three premiere, Martha Bullock (Anna Gunn), now the camp’s schoolmarm, reads sentences for the children to transcribe. When an eager student raises her hand to indicate that she’s the first to finish, Martha looks over the work, corrects a misspelling, and tells the girl, “It’s not so important always to be right, Mary. Or to be first.” At this point, Martha loses her place in the lesson plan for a moment as the pertinence of the advice to her own life sinks in. In season two, when Seth Bullock (Timothy Olyphant) offered upon her arrival in town to end his affair with Alma and start clean with Martha, she bitterly repudiated him on principle. But in season three, Martha begins to shrug off the impossible legacy of tragedy piled on humiliation and opens to the possibilities that are left. On the way, she drains the poison from her resentment and attempts an authentic relationship with her husband.

Martha isn’t the only woman in camp hoping to bounce back from humiliation. Calamity Jane (Robin Weigert) seems drunker than ever in season three, and more ashamed about it. In the early morning of this season’s first episode, as commerce commences and children walk to school, Jane furtively retrieves her stash as if there’s someone left in town who doesn’t know what she’s up to. Hiding in the shadows, she looks across the thoroughfare, hat pulled low, shielding her bottle with her arm, and squints at the view of Charlie Utter with Sofia on her way to school. The street tableau carries the resonance of two more opportunities she’s drunk away. In season one, Jane cared for Sofia as the child recovered from the massacre of her family, but fled the responsibility in self-pity to attend a bender after the murder of Wild Bill Hickok. In season two, she refused Charlie’s nurturing offer of a steady mail route.

Jane’s hostile interplay with Mose Manuel (Pruitt Taylor Vince) serves as a running commentary on her relation with the camp. She derides him as useless, and he mocks her filth and inevitable drunkenness. When she is coaxed into giving the schoolchildren a presentation on her experience scouting for Custer, she enlists Mose’s help in preparing a bath. “Camp get up a petition?” he snorts but helps her haul water without further complaint. During the speech, Mose contorts his bulk to peek into the classroom from his post outside, jerking away when he senses he might be visible from inside. The effort reveals a wordless undercurrent of respect and fascination for Jane’s past, even as the opposite sentiment prevails to her face.

Cy Tolliver (Powers Boothe) is another character looking to dig out of a hole. Bedridden after being gut-stabbed in the season-two finale, Cy advertises a newfound religious fervor whenever anyone comes to see him. As Joanie prepares to leave after a visit, Cy calls out, “Where’s my Good Book, honey?” She points it out on the bed next to him, and Cy clutches it to his chest. When Joanie (Kim Dickens) is safely down the hall, though, he drops the Bible instead of setting it down, betraying the insincerity of his convictions.

While many of the subplots in Deadwood employ small gestures in their telling, the story of the Ellsworth/Alma/Bullock love triangle is being told almost entirely in subtle looks and body language. When the married Bullock gets Alma pregnant, Ellsworth (Jim Beaver) steps into the vacancy to marry her without facing what he surely must know—that Alma is still in love with Bullock. In this season’s second episode, Ellsworth and Bullock pause and exchange a look at the bottom of the stairs after Bullock visits the ailing Alma (Molly Parker) at her home. The two men’s hesitation as Ellsworth passes Bullock and heads upstairs speaks to their confusion over who really is the man of the house in this moment of crisis.

Alma, for her part, offers no more clarity on the subject. In episode three, she returns home after a harrowing negotiation with Hearst over the future of her gold claim. Coming up the sidewalk in distress, she crosses into the thoroughfare to avoid passing Bullock’s store and exposing her fear to him. Bullock moves into the street to intercept her path. Unable to avoid him, she softens her face and holds his gaze and, when she is safely past him, scurries toward home like a small girl. Although she claims to have no regrets over their affair, its termination leaves a breach that she can’t control. Alma can dictate a last will where Bullock is the steward of her interests. Here in the life of the street, she has no say.

The Society Method: A Portrait of Alma Garret Ellsworth

Deadwood Recap: Season 3, Episode 2, “I Am Not the Man You Take Me For”