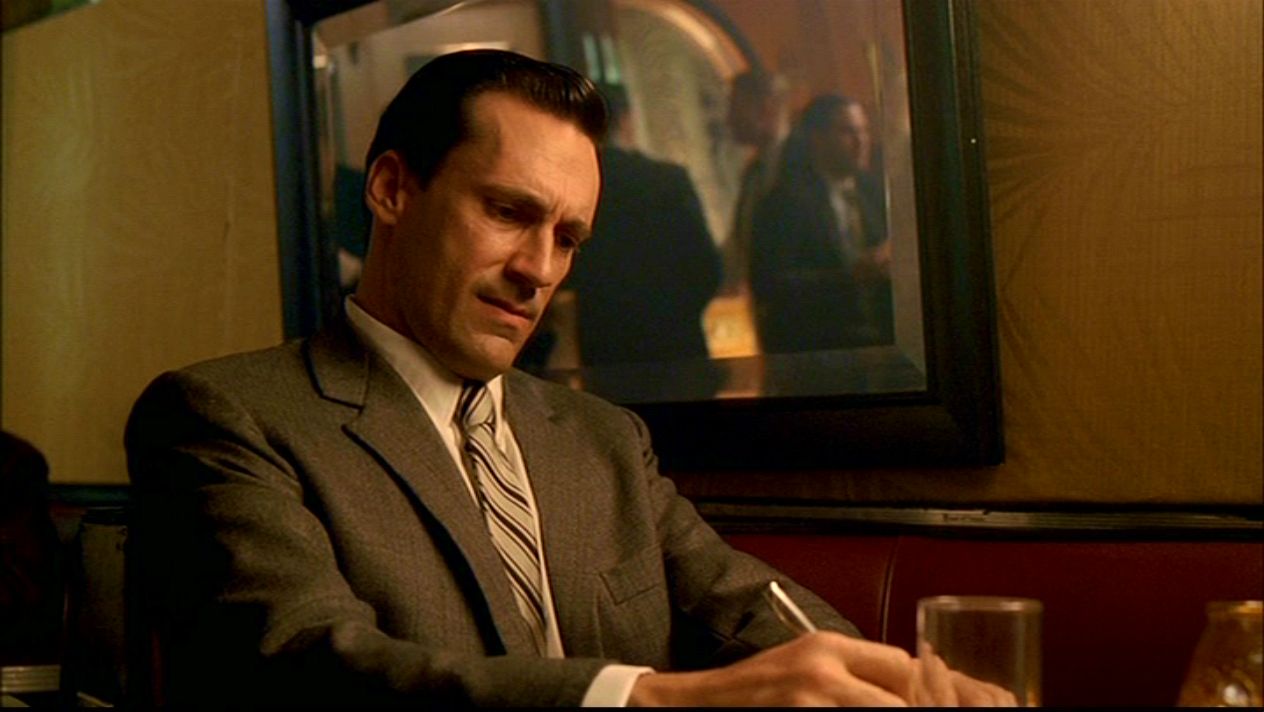 It’s a little uncommon for The House Next Door to recap a series from the very beginning—thus far, it’s only been done with John from Cincinnati—but Matthew Weiner’s Mad Men is really something special: After seeing the first four episodes at least twice each, I’m as hopelessly infatuated as I was when I got seduced by The Sopranos and Buffy the Vampire Slayer during their first seasons back in the late ‘90s—yes, it’s that good. So yeah, I’ll be dissecting the travails of Don Draper and his Sterling Cooper Andvertising colleagues every Friday for the next 13 weeks, in the process offering those entranced by the series a place to discuss it (as I write this, TelevisionWithoutPity had yet to devote a thread to it). If you missed the premiere, be aware that mild spoilers follow—so look away if you want to approach he series tabula rasa, but do come back after catching one of AMC’s rebroadcasts (the series is also available on iTunes).

Matthew Weiner wrote “Smoke Gets In Your Eyes” in 1999 as a spec script when he was a staff writer on Ted Danson’s sitcom Becker who was eager to make the leap into drama. It somehow crossed David Chase’s desk; as a result, Weiner became a key creative player on The Sopranos, writing or cowriting a number of seminal episodes (among them “Unidentified Black Males”, “The Test Dream”, “Kennedy and Heidi” and “The Blue Comet”). Yet, terrific though Mad Men’s pilot may be, there are ways in which it’s clearly the work of a less mature writer than the Weiner beloved by Sopranos fans—of the first four episodes, it’s the only one to make ironic jokes at the expense of the era in which it’s set. Such gags seem a bit like showboating by a writer eager for attention, but they’re forgivable in light of how substantial the episode is as a whole. The series’s main influences are evident from the word go: Weiner has obviously seen The Apartment and Sweet Smell of Success several dozen times. It’s equally clear that he’s a big fan of Cheever and Updike—Our protagonist, Don Draper (Jon Hamm) has the same opacity to him that often characterizes the leading men in their stories.

The lack of exposition in the pilot is one of its most seductive qualities—the little we learn about Don (he’s brilliant but impatient as hell and does not suffer fools gladly, and there are hints that traumatic battlefield experiences in either WWII or Korea did a lot to shape his personality) makes us eager to know more, and the subsequent episodes make it obvious that Weiner & Co. are goig to take their sweet time about revealing what makes him tick. There’s no equivalent to Tony Soprano’s sessions with Dr. Melfi to let us know what’s going on inside his head; indeed, the thesis that drinking served the same function in the 1950s that antidepressants and talk therapy do today is shaping up to be one of the major themes of the series. It also takes awhile for the relationships between some characters to become clear—only from reading the press kit did I discover that Don’s boss Roger Sterling (John Slattery) is the son of one of the agency’s cofounders, a man who died at a very early age (we learn a tiny bit about this in the brilliant fourth episode, which provides our second glimpse of the agency’s other namesake, Bert Cooper, an eccentric played to perfection by Robert Morse—who, appropriately enough, created the role of J. Pierrepont Finch in How To Succeed in Business Without Really Trying).

Social anthropology is one of Weiner’s main concerns—we’re dropped into this world and allowed to draw our own conclusions about it, as was generally the case with The Sopranos (at least before Chase began his meta-critique of audience bloodlust). This is especially effective in relation to the depiction of gender roles via Peggy (Elisabeth Moss), whose ignorance of her effect on men plays a big role in next week’s episode.

The cynic in me wondered if the use of Lucky Strikes in the episode was a backdoor advertising strategy—an extension of Don’s end-run around the ban on marketing cigarettes as “healthy”—until I learned from Wikipedia that Luckies disappeared from the U.S. market last year. Don’s invention of the “It’s Toasted!” tagline is one of the few major anachronisms (the phrase began appearing in Lucky Strike ads in 1917; if Weiner wanted to be scrupulously accurate, he could have had Don coin the early-‘60s TV ad slogan “Lucky Strike separates the men from the boys….but not from the girls”), and the use of a real-world brand poses some thorny creative issues. Fake brands are a long tradition in film and TV satires of the ad world, including many of the works that inspired Weiner. Using a real product adds verisimilitude, but creates the possibility Weiner and his writers could get lazy and make a corny period campaign for a well-known product a weekly staple. And though Don and his team work on print ads for Right Guard deodorant next week (and Bethlehem Steel in episode four), the products so far serve the plot rather than vice versa (it’s pretty clear that Weiner is going to go fictional whenever a Sterling Cooper campaign factors into an ongoing story arc, as with Rachel Menken and her department store).

As Nancy Franklin’s review of Mad Men in The New Yorker reminds us, the “office movie” was a major genre in the late ‘50s and early ‘60s, and if Weiner just wanted to pay tribute to it, Don could have worked in any number of fields. Advertising has a particular association with the culture of the three-martini lunch, however, and it points us toward what appears to me the major theme of the series: Frustration. Following one of the best-known clichés about ad men, both Don and Paul (Michael Gladis) have unfinished novels in the hopper and, as Don memorably says in the fourth episode, Sterling Cooper is home to “more failed artists and intellectuals than the Third Reich.“In coming episodes, the theme of frustration expands to encompass the relentless conformity of suburban-housewife culture as well as the awkward relationship between Pete Campbell (Vincent Kartheiser) and his his aristocratic parents. Per the calendar on the wall of the gynecologist Peggy visits, “Smoke Gets In Your Eyes” takes place in March of 1960. We’re about six or seven years away from when America’s collective frustration came to a boil; in the first episode of his remarkable series, Weiner turns on the gas, lights a match and places his characters on top of a long, slow flame.