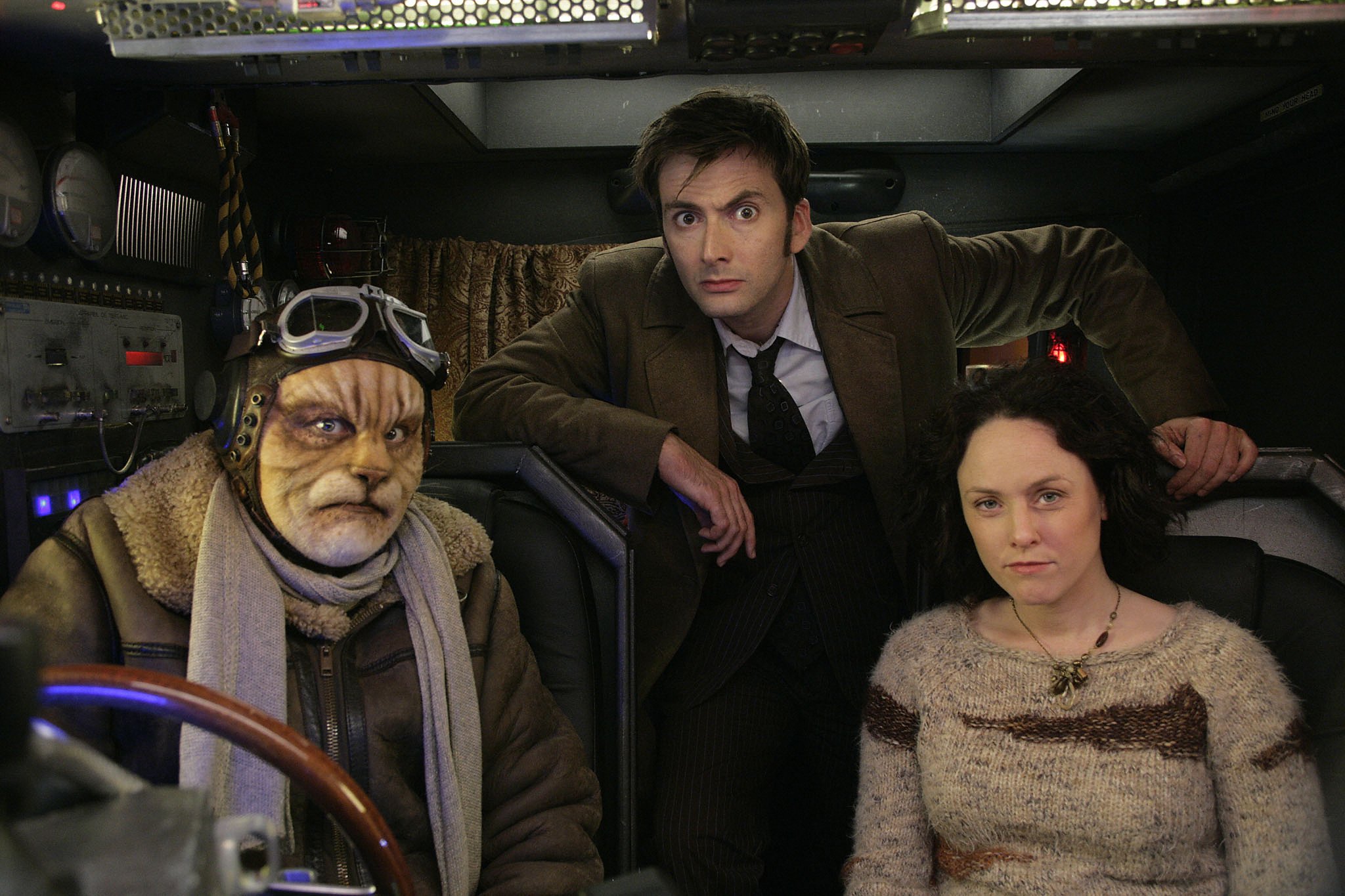 In “The End of the World” Russell T Davies had the Doctor take Rose to the year 5 Billion to see the Earth explode. The following year, he brought the pair to “New Earth” in the year 5 Billion & 23. Humanity had moved onward and upward, further out amongst the stars. With “Gridlock” he completes a trilogy by returning the Doctor to New Earth once again—only another 30 years have passed…and this time the future’s so dark, you gotta change lanes.

I didn’t really care for “Gridlock” on the first viewing. It was too busy and too chaotic to get a proper grip on. Subsequent viewings proved those very qualities are the backbone of the story. Like the concept it’s named after, the tight, claustrophobic atmosphere, I believe, is as it should be. Adding to that, there’s much technical brilliance at work here. The episode is jam-packed with CGI—more than in probably any other episode of Doctor Who. What feels expansive and huge simultaneously emits oppression and ugliness.

That isn’t to say “Gridlock” is without moments of beauty. Early on, the Doctor (David Tennant) and Martha (Freema Agyeman) have a moving exchange about his home planet, Gallifrey. She suggests they visit; he waxes nostalgic—almost choking on memories—failing to inform her it no longer exists. It’s as if he can perhaps keep it alive in her imagination. Maybe if he can do that, it won’t really be gone. Maybe he wasn’t at the center of its destruction. Or maybe he never should have left Gallifrey in the first place. But there remain places and times that even this Time Lord cannot reach, and Gallifrey is one of them. I love Tennant in this scene and he plays it effortlessly. All of sudden the Doctor’s 900+ years seem wiped away by this distant memory of a world he’d always taken for granted—a world so pompously powerful, before it actually happened, he assumed it could never die. It’s another one of those “Doctor defining” moments where one senses exactly how much the Doctor as a concept means to David the actor and Russell the writer.

But back to the future. New New York has changed considerably since his last visit. It appears that the sparse populace has become addicted to “moods” which are in this case a family friendly version of drugs. One can purchase moods such as Happy, Forget and Honesty as if they’re vitamins. The moods are taken via a patch placed on the neck—and they bear the green crescent moon symbol, which (as revealed in “New Earth”) is the universal symbol for hospitals. It seems quite the coincidence that the Doctor’s last visit revolved around chemicals and a hospital outside of New New York; here it appears that the hospital system has led to the near-fall of humanity. (So much for socialized medicine.) It’s certainly never stated that the Doctor’s previous actions led to this situation, but one simply must wonder if they inadvertently were, given his propensity to overlook the obvious.

From moods Davies takes us to the Motorway, where the majority of the denizens of New New York simply drive around and around in an apparently endless circle of exhaust fumes and closed exits ramps. It’s a maddening conceit, and one that first time around really played to my own feelings of claustrophobia. The bulk of the episode features the Doctor trying to get to Martha in the midst of all this hideousness (please don’t ask me to explain—you’ve gotta see it for yourself). Along the way he meets a zoophile whose beau, Brannigan (Ardal O’Hanlon of Father Ted), doesn’t seem to mind, as he’s the animal she philes. By the time their children are revealed, you’ve either joined in the insanity or thrown your arms and remote up in the air. But if you give up, you’ll miss the geriatric lesbians and the nudists! (Who says Doctor Who is just for the kids these days?)

Oh, and the Macra! You gotta stay for the Macra!! “What the fuck are Macra?” you’re most certainly wondering. Well a long time ago on television sets far, far away there was an old black and white serialized TV show and it was also called Doctor Who. It starred a guy named Patrick Troughton and he looked sorta like Moe from the Three Stooges. One time he encountered some giant crabs in a story named “The Macra Terror”. Guess what the giant crabs were called? Don’t bother trying to find this fossil of BBC history; it was scrapped ages ago and all that remain of the Macra are some crummy stills. When the Macra showed up in “Gridlock”, every single old school Who fan popped a boner (yes, even the ladies). Why we did this, I do not know. We did not ask for Macra, we did not care much about Macra, but we were puzzlingly, orgasmically elated to finally see some fuckin’ Macra. Maybe the Macra are the sole reason I didn’t care for “Gridlock” so much the first time. I wanted more Macra! The episode should have been presented in MacraVision!

I’d love to believe that somewhere in England, there were a couple old hippies hanging out watching “Gridlock” a few months ago. One turned to the other at the revealing moment and said, “Fuck me! Bloody Macra!!!” To which the other replied in the midst of taking a hit, “I told you this was some good shit, mate”. (Note to Russell T Davies: In Season Four, I demand some Killer Weed. That is all.)

Oh, I suppose this review simply wouldn’t be complete if I didn’t make some mention of the Face of Boe’s silly revelation to the Doctor: “You are not alone.” Whatever the hell that means.

There. Now, back to the Macra…

Next Week: “Daleks in Manhattan”! (Come now…what more do you really need to know?)

Classic Who DVD Recommendation of the Week: To prepare you for the next two weeks of Dalekmania, I’m suggesting a science fiction double feature: The two Who theatrical outings from the sixties, entitled Dr. Who and the Daleks and Daleks’ Invasion Earth: 2150 A.D. Both star Peter Cushing as a human named Dr. Who. He’s created “TARDIS” in his laboratory and before you know it there are ranting pepperpots all over the goddamn place. They’re the most fun you’ll have this side of a William Castle flick.

Mad Men Recap: Season 1, Episode 1, “Smoke Gets in Your Eyes”