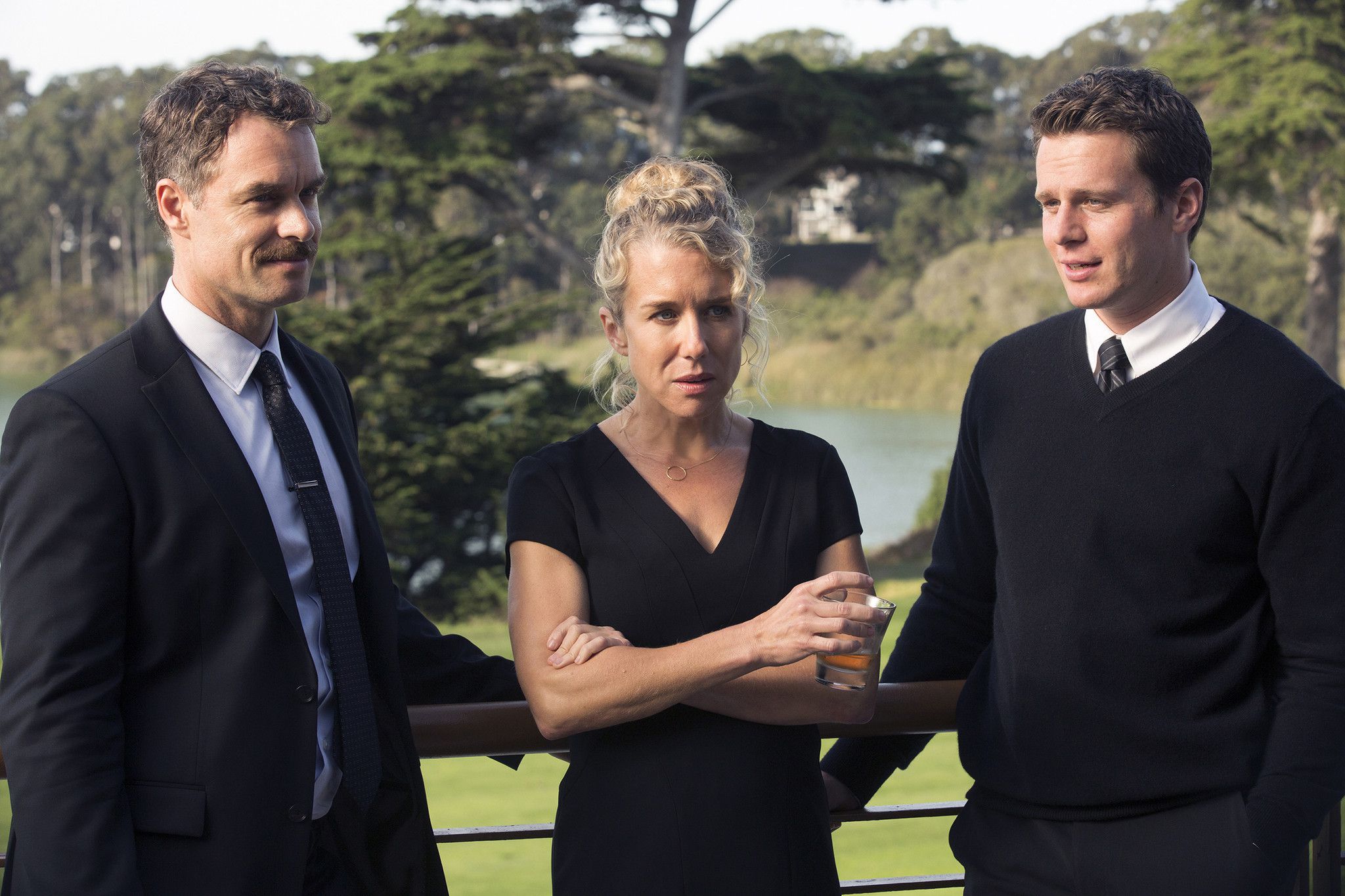 Though Looking is a series rightly known for its rather frank discussions and depictions of sex, it’s also finely attuned to the rhythms of friendship—the type of affection at the center of “Looking for a Plot.” The focused three-hander, which finds Patrick (Jonathan Groff), Dom (Murray Bartlett), and Doris (Lauren Weedman) in Modesto for her father’s funeral, lends new meaning to Katrina and the Waves’s “Walking on Sunshine,” piped onto the empty, glittering dance floor of a Modesto gay bar known as the Brave Bull. “I used to think maybe you loved me,” we hear, as the main trio lets loose the night before the burial. “Now, baby, I’m sure.”

Indeed, the strength of Looking’s platonic relationships is clear from the outset, as Patrick’s friends tease him through brunch the morning after his meltdown in “Looking for Gordon Freeman,” despite being among the targets of his nasty speech. “Why’d you guys let me have tequila last night?” he says, clearly mortified. “You know it makes me mean and scary.” It’s here, shortly after sending a tit pic to Malik (Bashir Salahuddin), that Doris receives the bad news from her Aunt Sarah (Mary Kay Place): “Oh, fuck,” she says. “My dad’s dead.” Patrick chuckles, thinking it yet another of Doris’s irreverent jokes, but “Looking for a Plot” makes clear that she’s not just Dom’s fag hag. Weedman, tremendous throughout, discovers new depths of emotion roiling beneath Doris’s steely comic persona, allowing her lip to quiver ever so slightly before saying, without quite being able to make eye contact with anyone at the table, “That’s not my coffee. I never got my coffee.”

On the road to Modesto, Dom and Doris reminisce about their days as a couple, when Doris’s father offered to pay for the ring should Dom propose. In a surprise reveal, Patrick leans forward from the backseat to request a visit to the Frito-Lay factory, then thanks Doris for allowing him to tag along. “I’m not sure what it says about me,” he says, “that I’m going to your dad’s funeral, who I never even met, when I should be at home dealing with my own shit.” Though Looking hasn’t laid adequate groundwork for the closeness between Doris and Patrick that this arrangement suggests, it makes some sense that she’d accept his presence: My impression of Doris, gleaned from fitful glimpses over the course of nearly two seasons, is that she surrounds herself with a protective buffer of people to stave off incursions from the life she left behind. Indeed, “Looking for a Plot,” an episode devoted to memories of troubled childhoods and long-ago escapes, examines the informal families we create when we make the leap into adulthood. You really can’t go home again, it suggests, even when you’re forced to step foot in the place from whence you came.

And so the episode follows the tension between stasis and change, between who the characters were and who they’ve become, as Dom and Doris take Patrick on a makeshift tour of Modesto. “It’s like nothing’s changed,” Dom remarks as he drives the Volvo under the city’s famed green arch (“Water Wealth Contentment Health”), but of course everything’s changed too. The desolate pool at the Clarion no longer seems an oasis, but an ironic joke on the past; the Brave Bull is just another dive compared with the San Francisco scene. The most potent expression of the ways in which memory can suddenly flood one’s defenses comes when the trio visits a donut shop, formerly home to Dom’s late father’s Portuguese diner. His dad’s “dream” now sells apple fritters, Doris’s father is dead, and Patrick’s testy relationship with his own parents shadows his comment that, in high school, he “came to a place like this every afternoon and sat in a booth alone, with a box of glazed [doughnuts], reading an Out magazine tucked inside a Sports Illustrated.” Though their shared experience of making a break for San Francisco as soon as they had the chance carries a faint whiff of cliché, as someone who grew up in a small town and moved to the big city, I must say that “Looking for a Plot,” written by Jhoni Marchinko and directed by Andrew Haigh, sketches the emotional stakes of the return home in fine detail. Always interwoven with thankfulness at having left is a certain nostalgic wonder at what might have been. As Dom asks later, at the funeral reception, “What was it about this place again that I couldn’t wait to get away from?”

No matter how sweet the relief of leaving, however, the sense that nothing changes can sneak up on you now and again, as the problems associated with a particular place and time in your life recur in slightly different forms. At the Brave Bull, for instance, Patrick spies “Mr. Lonely” down the bar, projecting details from his own past onto a man he’s never met. “Getting drunk, probably snuck out of his parents’ house, wearing his sister’s jeans, thinking about killing himself, obsessively listening to Evanescence,” Patrick relates. “God, I was so fucking lonely back then.” There’s a slipperiness between past and present tense here that’s striking, for Patrick, having drunkenly tried to burn all of his bridges at the Halloween party, is once more “Mr. Lonely” himself, staring longingly at the man down the bar before the man’s boyfriend arrives and kisses him. Even in Modesto, which in Patrick’s San Francisco superiority complex is simply another backwater, it’s not impossible to find what he’s been looking for all along. It’s unclear if it’s dawned on him yet, as he never says it explicitly, but Patrick’s romantic problems, which he perceives as circumstantial, are wholly of his own creation.

By the end of the episode, Dom’s come out to his father by yelling “I’m gay!” from the window of the Volvo; Patrick’s wrecked the car and repaired his relationship with Kevin (Russell Tovey); and Doris has finally cried, hard and fast, in Malik’s embrace, but the heart of “Looking for a Plot” is this understanding that moving forward is easier said than done. Weedman’s note-perfect performance as Doris views her father’s body conveys the physical particulars of grief, her sharp intakes of breath and tightly crossed arms emphasizing just how unwilling she is to accept, as she says, that “he’s gone.” Similarly, Patrick’s loud crying jag at the funeral comes as Aunt Sarah reads from Walt Whitman’s poem “A Clear Midnight,” which describes “the free flight” of the soul that arrives with “the day erased, the lesson done”—a sloughing off of what’s come before that Patrick appears unable to achieve.

“Looking for a Plot” is a rough-hewn episode, surely, but it’s buoyed by the homespun wisdom that what keeps us from succumbing to the temptation to stay in one place is the gravitational pull of others, constantly pressing us to action. Malik wins Doris’s trust, Kevin wins Patrick’s heart, and Doris wins Dom’s gratitude, offering her small inheritance as seed money for his chicken window. What she says is part of a relationship that dates nearly as far back as either can remember, but she phrases it in terms of a payoff that’s still to come. “There’s nobody that I’d rather invest in more than you, you know that?” she says. “Because you’re my family.”