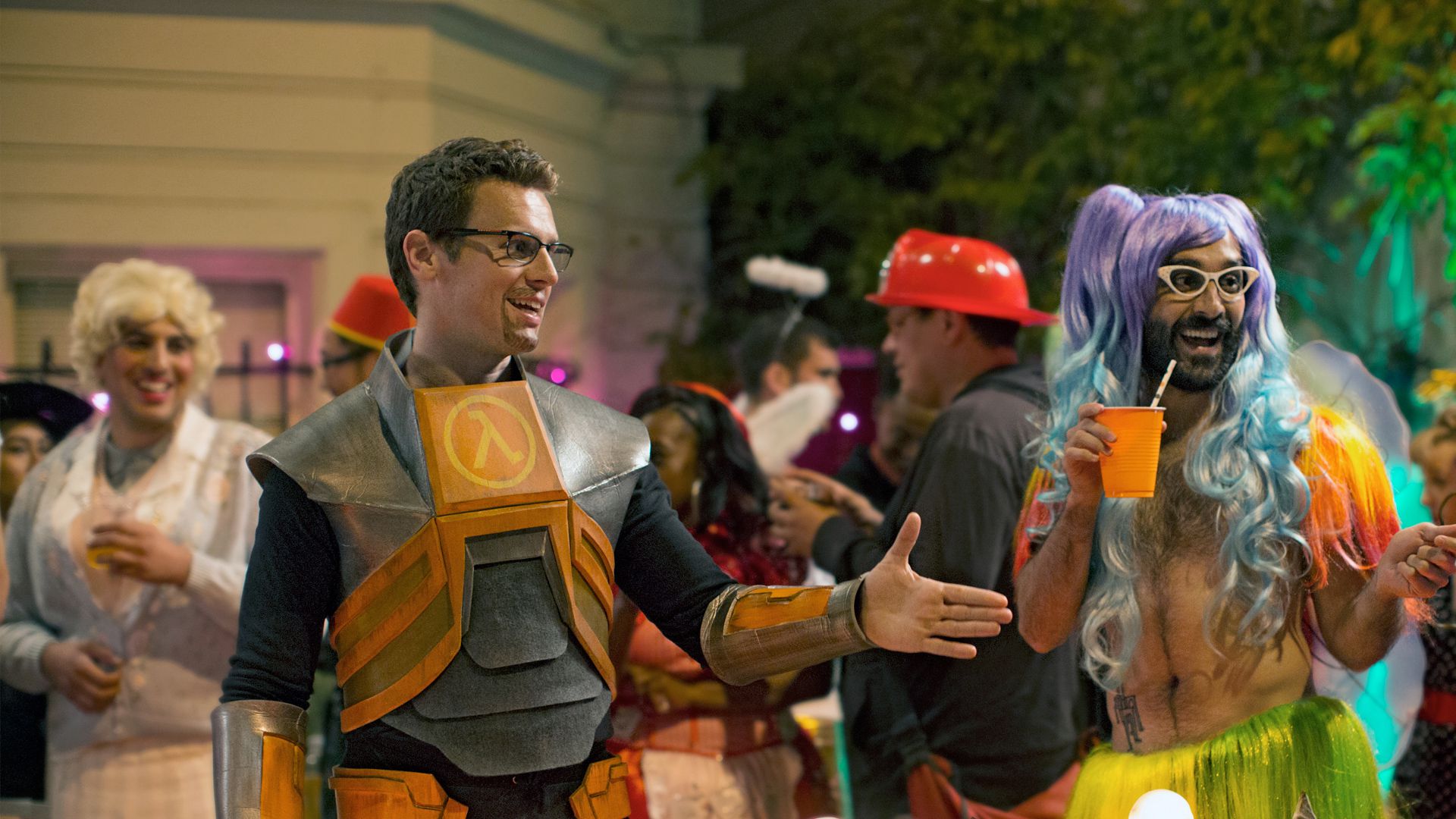 In honor of perhaps the most excruciating Halloween bash ever thrown, a drunken disaster of karaoke sign-up sheets, PrEP shaming, and sloppy sexual advances that culminates in a meltdown so embarrassing I watched it through my fingers, let’s pour one out for Patrick (Jonathan Groff), the victim of his own unreasonable expectations. “Looking for Gordon Freeman” finds him dressed as the titular video-game character, determined to become a “fun gay,” though in an episode chock-full of extratextual allusions, the one that lands hardest is the least current. “If it’s any consolation,” Agustín (Frankie J. Álvarez) says after Patrick’s flameout, “there was only one suicide during Clarissa Dalloway’s party.”

The reference to Mrs. Dalloway is inexact (Agustín needs to brush up on his Virginia Woolf), but it goes some way to explaining why “Looking for Gordon Freeman” is such uncomfortable viewing. For Clarissa, the pressures of playing hostess suddenly destabilize the relationship between how she sees herself and how others perceive her, and tonight’s episode of Looking exposes Patrick to similar dangers. As Agustín points out, Patrick’s “idea of a fun gay is a character with so little personality, he’s basically nothing,” and indeed the kind of sleek, anesthetized sexiness Patrick wants to project may be the product of our culture’s dominant image of the ideal gay man, which tends to treat idiosyncrasy as a flaw. Sculpted bodies, mainstream tastes, “respectable” forms of lust and love: These are not, in themselves, necessarily damaging, but it’s troubling that Patrick has begun to see them as enforceable norms.

It’s worth noting, however, that Patrick’s merely playing the role of the “cute, well adjusted, single guy,” and he doesn’t manage to mask his inner turmoil nearly as well as Mrs. Dalloway. “Looking for Gordon Freeman” is a one big adventure in comic anagnorisis, in which Patrick’s façade begins to melt away long before his climactic implosion. His barely controlled anguish at the news that Kevin (Russell Tovey) and Jon (Joe Williamson) have discussed moving back to Seattle is only the first in Patrick’s series of decreasingly successful attempts to match his appearance to his newfound self-image; after all, it turns out that his version of Gordon Freeman, like his enthusiastic mentions of Maleficent and The Legend of Zelda, is the mark not of the “fun gay,” but of someone whose true passions are far more specific than stereotype. The episode’s excellent running gag, in which Patrick is misidentified in costume as Morgan Freeman, “the gay Walter White,” and Mega Man, conveys this disconnect beautifully. Patrick assumes that he can will people into seeing him as he wants to be seen, but he can’t pull off the performance.

Nor should he try, “Looking for Gordon Freeman” suggests: The aforementioned disaster is one of disingenuousness, and it’s no surprise that the characters who come off best are those who approach their feelings honestly. Agustín doesn’t try to play it cool with Eddie (Daniel Franzese), gently pressing him to stay the night; Dom (Murray Bartlett), with an air of sweet disappointment, encourages Doris (Lauren Weedman) to take the plunge with Malik (Bashir Salahuddin); even Richie (Raúl Castillo) and Brady (Chris Perfetti) seem more comfortable together than ever before, kissing, posing for photos, and doing the Monster Mash. By contrast, Patrick is so set on maintaining the guise of happiness that he loses sight of the real thing, and the consequence of faking it is, ultimately, that the truth comes out in a mad, catastrophic torrent. “It’s my party, and I’m going to say what I want to say,” he remarks, before taking to the microphone to insult more or less every person he knows. Dom’s chicken window, Agustín’s former substance abuse, Brady’s advocacy of PrEP, and Kevin’s troubled relationship with Jon are all subject to Patrick’s ill-considered toast, but of course it’s Patrick, only pretending to be “well adjusted,” who ends up playing the fool.

A transitional episode about relationships in transition, “Looking for Gordon Freeman” is an inevitable step down from last week’s superbly wrought “Looking for Truth,” but it’s nevertheless telling that Patrick’s one redemptive moment of self-awareness is also the one in which he removes the shield of Gordon Freeman and “fun gays” to be completely, sincerely, vulnerably himself. “I don’t want you to go to Seattle,” he tells Kevin. I don’t want us being weird to be the reason I never see you again. I’d miss you too much, if you go.” As Mrs. Dalloway thinks after hearing the news of Septimus Smith’s suicide:

“She felt somehow very like him—the young man who had killed himself. She felt glad that he had done it; thrown it away. The clock was striking. The leaden circles dissolved in the air. He made her feel the beauty; made her feel the fun. But she must go back. She must assemble.”

Patrick’s self-immolation is no suicide, and “Looking for Gordon Freeman” is no Mrs. Dalloway, but there’s a similar catharsis at the end of the episode—a dissolution and, at least, the potential for Patrick to assemble a sense of self that’s not based on a fantasy. The moment, when it arrives, has the feeling of a turning point, from which Patrick might follow any number of paths, and indeed he ends the night with a faint smile. His party may have failed, but there’s hope for him yet.