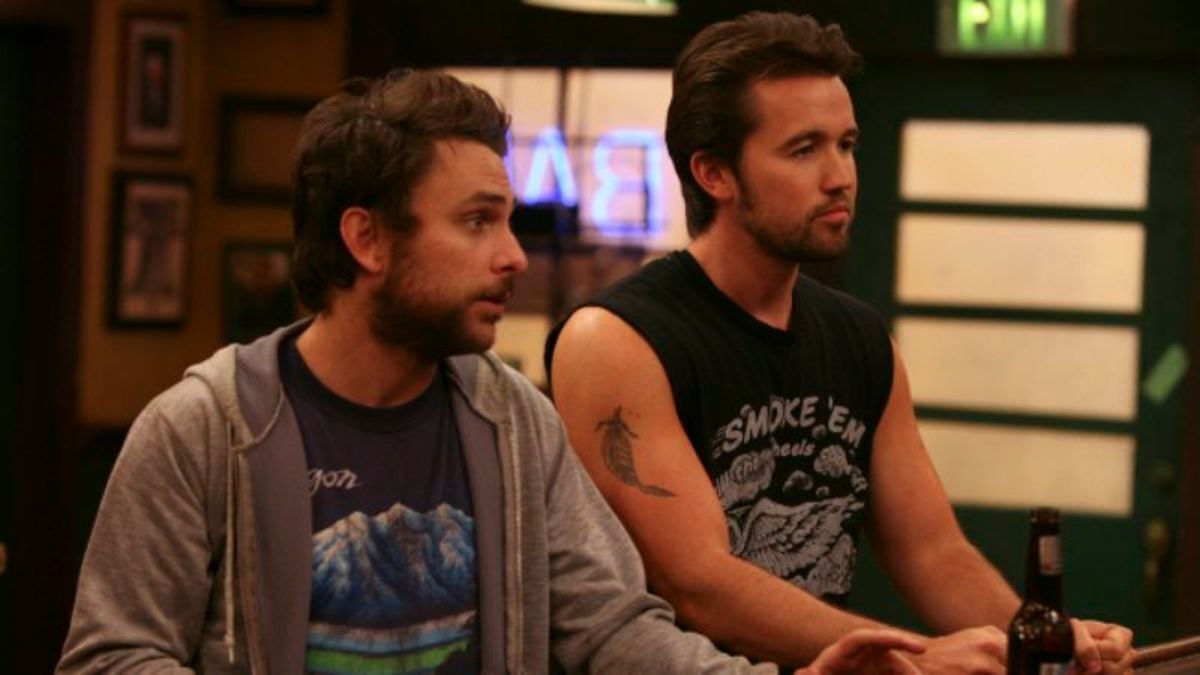 Enjoying a significant ratings spike in its fifth season, FX’s only original comedy series, It’s Always Sunny in Philadelphia, has rather fortuitously found its footing again after an underwhelming fourth season that devoted entirely too much to series in-jokes. It’s not that the show’s stock of recurring gags—the frequent teabagging of the indigent Matty “Rickety Cricket” Mara (David Hornsby), or the appearance of Charlie’s (Charlie Day) spandex-clad “Green Man”—aren’t funny, but Sunny is at its best when it focuses on story arcs that are more plausible, at least within the context of its characters’ fully developed sociopathology. Season five, thus far, has managed to use series continuity callbacks as a means to supplement plotlines that are topical and character-driven.

What works best about the show is that its central characters—“The Gang,” consisting of Charlie, Mac (Rob McElhenney), Dennis (Glenn Howerton), Sweet Dee (Kaitlin Olson), and Frank (Danny DeVito)—have developed an insular world for themselves, giving their often explosive interactions with the rest of the population and with broader social issues an almost alien quality. Unencumbered by basic principles of social pragmatics, boundaries, and empathy and unmoored by common principles of decency and morality, the Gang variously evokes outrage and offense from those around them and, in turn, the show works brilliantly as a comedy of depraved manners.

It’s easy to reduce the show to simple shock value: Certainly, an episode in which Frank conspires to sleep with his non-blood-related niece, referred to by Dennis and Sweet Dee as their “Garbage Pail Cousin” and played with a disturbing sleaze by guest star Mary Lynn Rajskub, invites that kind of dismissal. But the more subtle ways in which the characters apply their gross misunderstandings of basic human behavior comprise the show’s most uproarious moments, such as Mac and Dennis’s attempt to play “Good Real Estate Agent, Bad Real Estate Agent,” which quickly devolves into sexual hostility directed toward an unsuspecting couple of would-be homebuyers. The show impresses for its adherence to its internal illogic: In this particular version of Philadelphia, it makes perfect sense that Sweet Dee would throw a bachelorette party with the intention of stealing the groom, or that Frank would mistake an intervention for a roast.

That each of the principal characters has been fully drawn over the course of the show’s run gives context to even the most absurd story. Despite the rapid-fire pace and the improvisational tone of the profane dialogue, individual episodes are tightly scripted to ensure that key details aren’t lost. Frank’s revelation that his quickly accelerating descent into lunacy and addiction is actually a deliberate choice has provided the backbone for several episodes, just as Charlie’s illiteracy has provided both spectacular throwaway lines (his one-word rebuttal, “filibuster,” to a Harvard-educated lawyer is perhaps the highlight of the season so far) and a source for the Gang’s economic woes. As in the show’s third-season creative peak, the attention to continuity and timely plot devices is well balanced by the focus on character and actual comedy. Sunny may not be the most highbrow comedy on television, but it’s arguably the one with the highest density of actual laughs.

Understanding Screenwriting #33: Amreeka, My One and Only, Ghost Town, Yoo-Hoo Mrs. Goldberg, & More