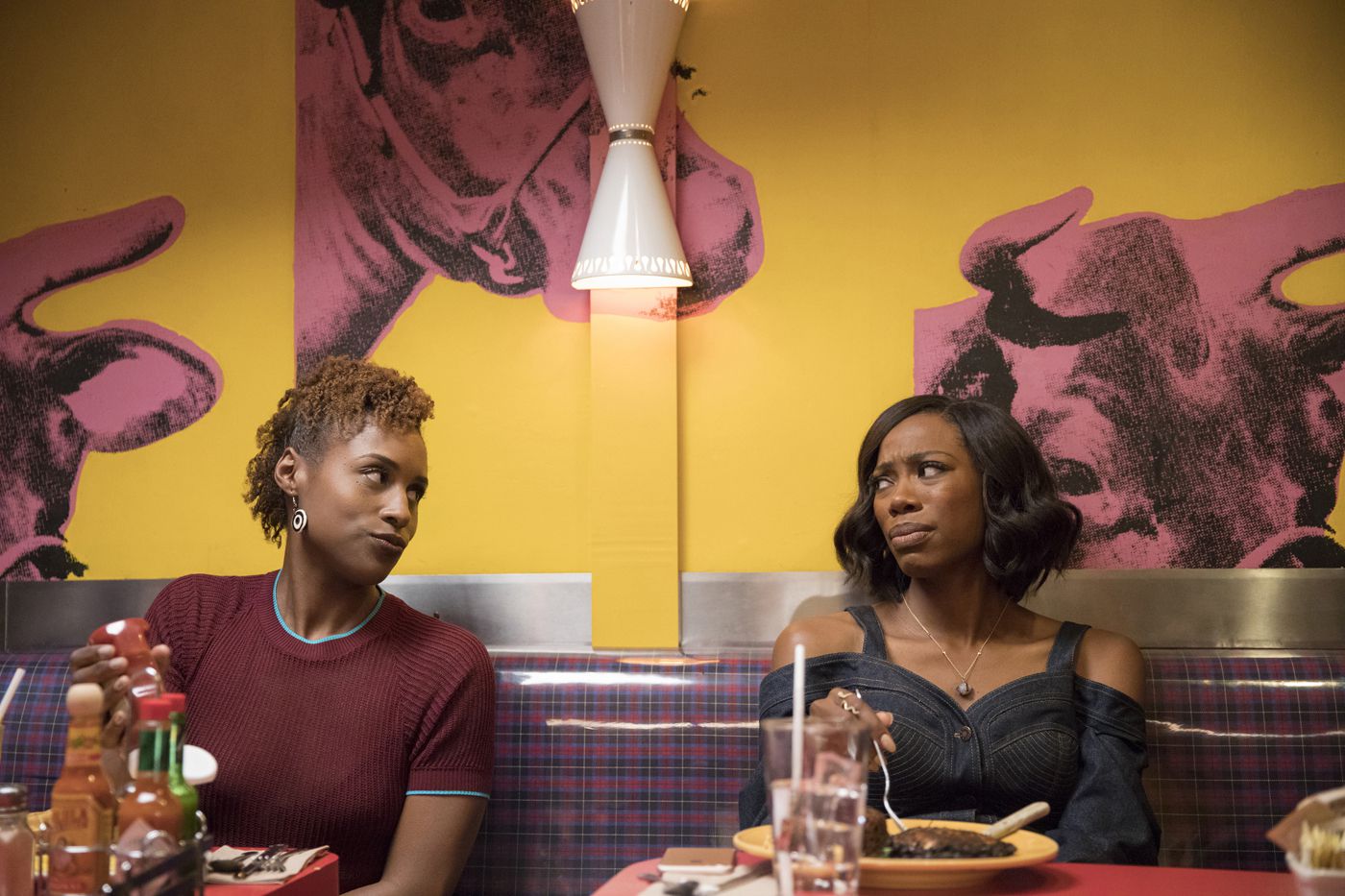 The latest episode of HBO’s Insecure finds all three of the show’s protagonists single and, more than in any other episode up to this point, ready to mingle. For Issa (Issa Rae), a new romantic possibility comes in the form of Daniel (Y’lan Noel), who makes his first appearance here since last season. Molly (Yvonne Orji), meanwhile, is considering an even bigger shakeup in the way she thinks about and values dating: polyamory.

In a continuation of last week’s “Hella Open,” Issa is fully embracing her “hoe phase”; she is, as Kelli (Natasha Rothwell) puts it, “building a roster,” one she hopes to add some names to at the Kiss ‘n’ Grind event. Feeling confident after her tryst with “neighbor bae,” Issa is ready to woo her Tinder date and collect numbers. But predictably, Issa is undone by her own hubris; the date is a flop, and she spends much of the night as an awkward wallflower.

Indeed, Issa is mostly a side player in “Hella LA,” providing most of the episode’s laughs. In another shout-out to Insecure’s sitcom influences, she even sings (well, garbles) the Living Single theme song to Daniel to indicate her dating status. Initial awkwardness aside, the reunion between the two characters is fairly drama-free. By episode’s end, it’s clear that Daniel wasn’t just “an itch she needed to scratch.” He and Issa share a genuine connection, and it will be interesting to see whether he pops up again this season.

Kiss ‘n’ Grind provides a venue for Molly to also reconnect with a friend from high school, Dro (Sarunas J. Jackson). Most of the episode sees them engaging in lighthearted, platonic bonding, but when the vibe turns flirtatious, Molly becomes uneasy. The fact that Dro is in an open marriage helps assuage her guilt, but she can’t help but question the couple’s decision. Hooking up with someone in an open marriage could give Molly the space to experiment without getting too serious, but it’s likely that she’s too traditional to go for something “progressive as fuck” (to quote Kelli again). One of the first things she says to Dro is, “You got married in the church.” Molly has always leaned socially conservative; after all, she couldn’t handle a boyfriend who had had a sexual experience with another man. She laments, “Is anyone married like my parents anymore?” It’s difficult to imagine that someone with such stringent views of marriage and masculinity would be open to polyamory, but perhaps a willingness to be more forthcoming at work could signify a similar willingness for Molly to be more open-minded about her love life.

The events that unfold at Kiss ‘n’ Grind, though, are small potatoes compared to Lawrence’s (Jay Ellis) disconcerting storyline. Over the course of a single episode he has both a terrifying encounter with the police and an interracial threesome. “Hella LA” details how a few routine interactions, like being pulled over for making an illegal U-turn or getting hit on at the grocery store, can quickly become scary or dehumanizing. When he’s pulled over, Lawrence does all he can to seem as compliant as possible, whether it’s switching out the rap on the radio for quiet jazz or making sure he calls the officer “sir.” Lawrence may say and do all the right things to appease the officer, but the fear with which he goes through these motions is unmistakable.

And Lawrence is further humiliated—by being turned into a noxiously stereotyped and fetishized object—after meeting two women, one white and one Asian, at a store and agreeing to sleep with them. While the encounter is initially easygoing and nonthreatening, it increasingly and disturbingly becomes racially charged. One of the women comments on his “big black cock” and its juxtaposition with her whiteness. When the pair finishes having sex, the other woman gleefully hops on him, scoffing when he says that he needs a few minutes. “What’s the problem?” she says, “we’ve been with a bunch of other black guys who can cum and keep going.”

“Hella LA” deftly captures the everyday anxiety of black male experience, whether it’s the potential of police brutality or fetishization. Nonetheless, the episode feels overstuffed in the way it tries to tell too many stories at once. This could have been avoided were this a bottle episode that focused solely on Lawrence. Rather, we’re left with an episode whose compelling subject matter can’t completely save its unevenness of execution.

Review: Marvel’s The Defenders: Season One