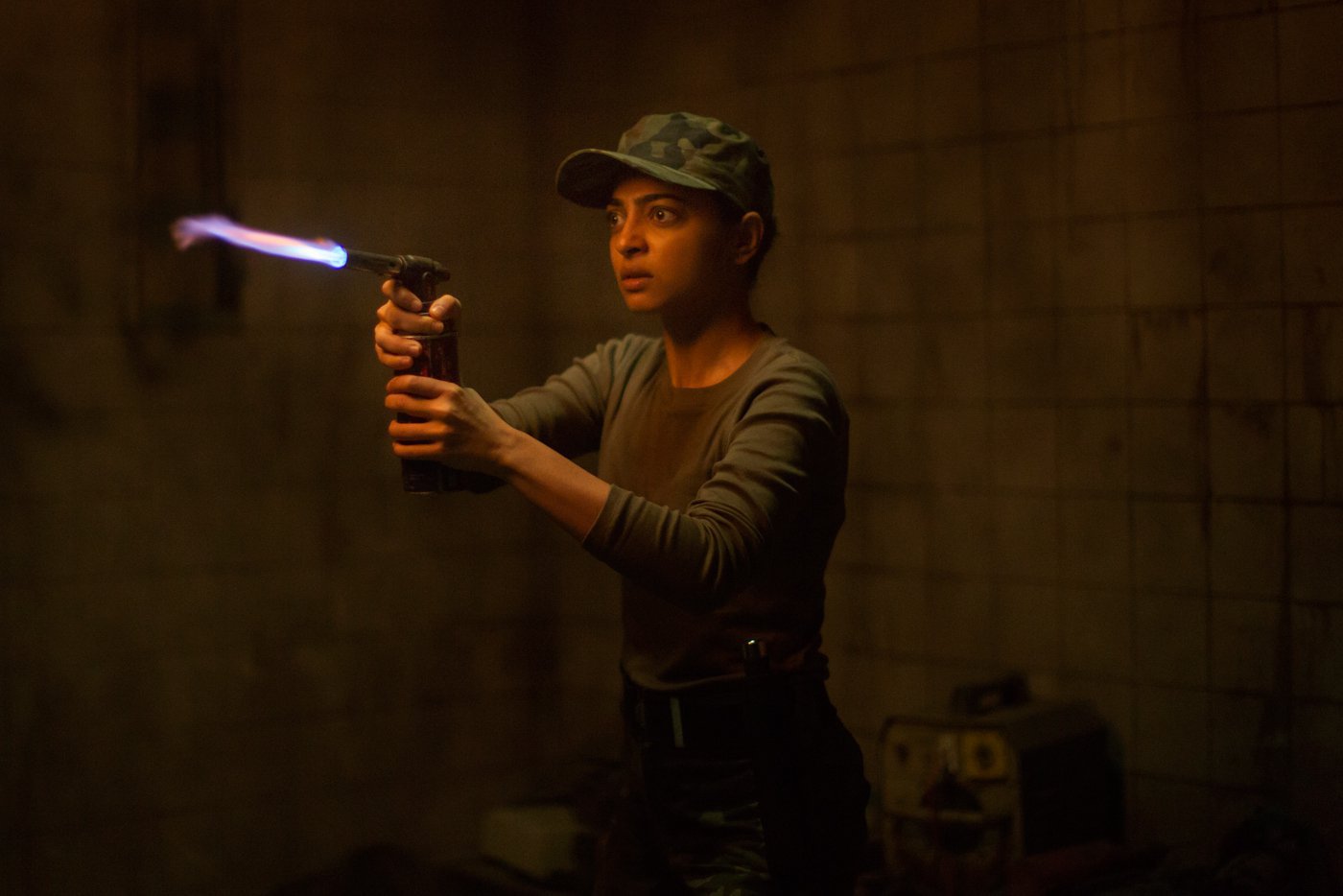 With Ghoul, writer-director Patrick Graham takes a premise that might have soared as a lean horror film and stretches it out to a three-episode miniseries. The result is a production that constantly dips into redundant exposition, all the while eliding emotional textures that might complicate the smooth delivery of unoriginal plotting. For a series concerned with totalitarianism and familial betrayal, Ghoul is ironically impersonal and perfunctory, suggesting the work of a polished propaganda machine.

Ghoul is set in India in the near future, and opening text informs us that the government has set up secret detention camps to combat rampant terrorism, which includes possession of “subversive” materials. Nida Rahim (Radhika Apte) is a young woman who works for the military, and is a true believer in its methods of imposing social control, from sudden imprisonment to extreme torture. Nida’s father may be potentially connected to one of the government’s chief adversaries, Ali Saeed (Mahesh Balraj), who’s captured and imprisoned in the production’s opening scenes. Saeed, however, isn’t really himself anymore, but a shapeshifter who devours its victims and has been conjured to give this government a taste of its own brutal medicine.

Ghoul is a siege drama at heart, in which the protagonists are tasked with holding a prisoner capable of summoning forces that humble his captors. Such a narrative is familiar to both the western and horror genres, and brings to mind films like Howard Hawks’s Rio Bravo and John Carpenter’s Assault on Precinct 13, The Thing, and Prince of Darkness. There are also shades of The Dark Knight here, as the titular monster suggests the Joker in his ability to play the law enforcement’s corruption against itself, though Graham does surprisingly and disappointingly little with the ghoul’s ability to read the minds of the other characters—perhaps because these characters, all essentially ciphers, have little on their minds worth reading.

Hawks and Carpenter indulged tropes and stereotypes as springboards for exhibiting their own worldviews and personalities. For Graham, tropes beget more tropes. Hawks and Carpenter are masters of crisp and flip dialogue, while Graham has his characters speak in generalities divorced of rudimentary emotion. When Nida discovers that she’s responsible for her father’s grim fate, she barely pauses before marching onward toward the next action spectacle. Even by the relativist standards of extreme circumstances, Nida’s automaton-esque insensitivity is galling, though Graham doesn’t seem to know it.

The action scenes are competently staged but are all of the jack-in-the-box variety, with a toothy, blank-eyed demon popping up to kill and escape on cue, disappearing into the usual dark and dank corridors. Even Nida’s awakening lacks punch, provoking one to wonder why it took her so long to arrive at an inevitable conclusion at such great cost—another irony that Graham leaves hanging. Despite its occasional pretenses of political awareness, Ghoul isn’t really concerned with the details of a blossoming rebellion. It’s a late-summer time-killer, no more or less.