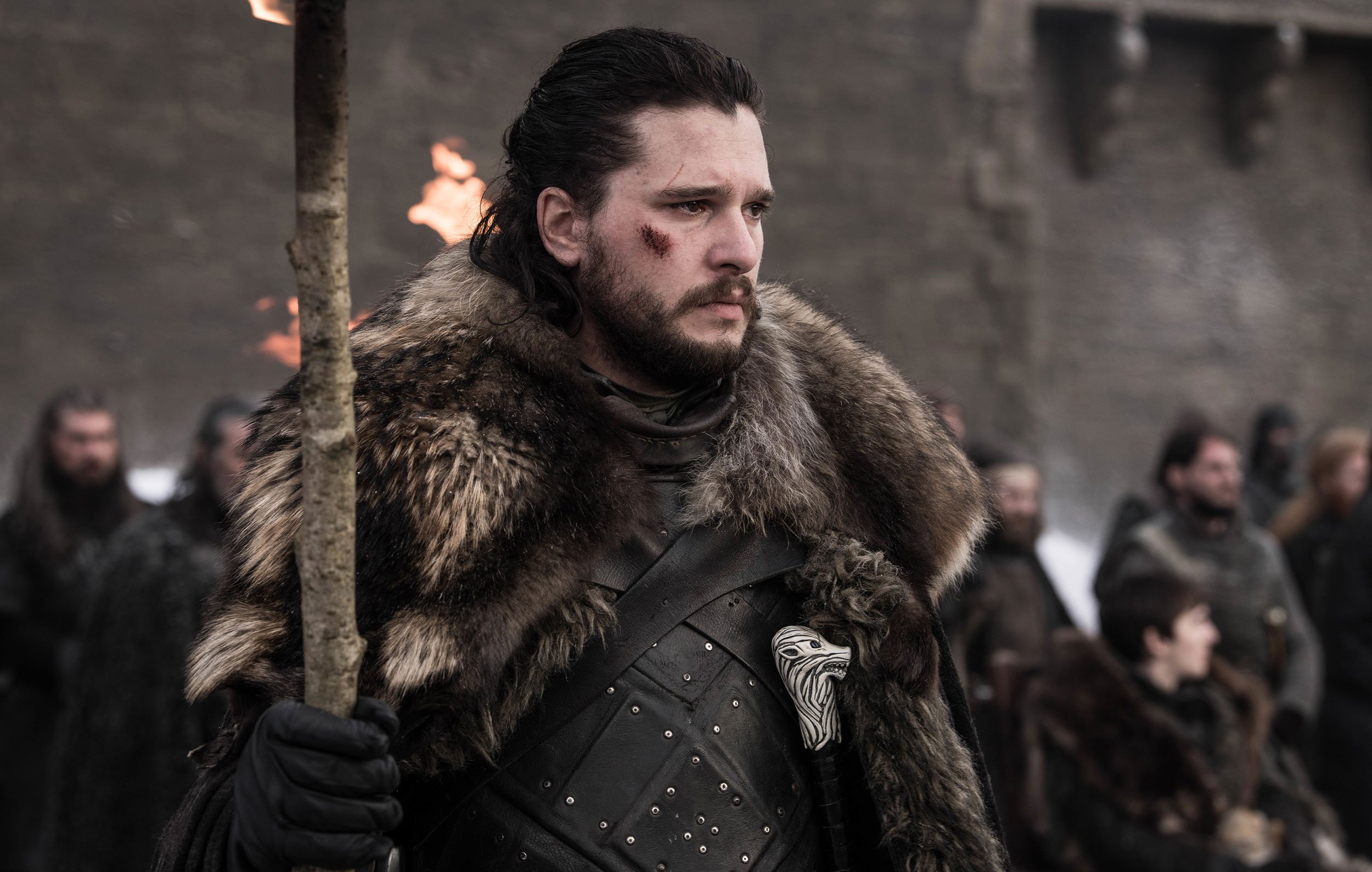 “The Last of the Starks” begins with an extreme close-up of Jorah Mormont’s (Iain Glen) corpse. Right away, the episode is a step back from the sweep of the Battle of Winterfell, homing in on a few casualties that are meant to synecdochally stand in for all of them. And that’s a misstep for not only reducing the scale of losses from the war against the undead, but also for doing so in the interest of narrative convenience.

We hear talk of how weary the survivors are but never glimpse their agony. Instead, we’re offered a kind of performative shorthand: another of Jon Snow’s (Kit Harington) instantly forgettable speeches—this is the man they would make king?—and a disaffecting series of synchronized motions in which Daenerys (Emilia Clarke), Sansa (Sophie Turner), Arya (Maisie Williams), Samwell (John Bradley-West), and Jon step forward to burn the bodies of those who bravely died for them. There’s no feeling behind these sequences because they suggest the fulfillment of a checklist, though that might not have been the case had the camera lingered just a while longer on, say, Daenerys’s face as she kisses the forehead of her loyal protector.

The episode’s more intimate moments all lean into big, emotional gestures that exist above all else to get the ball rolling on wrapping up the characters’ stories. Take, for instance, Gendry (Joe Dempsie), the bastard son of Robert Baratheon. Formally recognized by Daenerys as a lord, Gendry immediately proposes to Arya upon almost being impaled by one of her arrows. She kisses him, then declines his offer: “I’m not a lady. That’s not me.” And it’s at that point that one feels that the book has been closed on Gendry’s storyline.

Elsewhere, Bronn (Jerome Flynn) somehow manages to sneak into Winterfell and conveniently chances upon Jaime (Nikolaj Coster-Waldau) and Tyrion (Peter Dinklage). Bronn is there to also conspicuously tie up loose ends, in this case to extort the two men for a better deal than the one their sister offered him for their heads. More frustrating, even when the episode focuses on more intimate facets of its characters’ lives, as with the long-suppressed chemistry between Jaime and Brienne (Gwendoline Christie), there’s an obligatory quality to the presentation that prevents the scenes from leaving a lasting impact.

It makes sense that Tyrion would push the sensitive topic of Brienne’s virginity, giving his brother an opportunity to be her golden-armed knight, and in every sense of that phrase. But no sooner has Jaime chosen to remain in the North with Brienne, who’s still sworn to protect Sansa, than he’s sneaking out into the night to ride south to confront his “hateful” sister and to take account for the things he once did on her behalf. Jaime and Brienne share a plausibly teary goodbye, with Brienne—so not accustomed to happiness—begging him to stay and Jaime forced out of stubborn pride to drive her away like a too-loyal puppy, but we haven’t seen enough of what they’ve both found to understand what they’ve lost. Worse, it’s all so predictable. Jaime, like Arya and Sandor (Rory McCann), has a vengeful part to play elsewhere, meaning his happy ending with Brienne was never meant to be from the get-go.

The characters directly connected to the main plot are slightly better served, in particular Daenerys. The character grows in fascinating ways over the course of the episode, beginning with the way she quietly stews over the way the men praise Jon’s dragon-riding heroism while overlooking her own. She doesn’t pivot immediately to one extreme or another; she threads the needle between the unnecessary paranoia and wrath evinced by her Mad King father and the rightful concerns of a queen threatened by another’s claim to her throne.

That this claimant is Daenerys’s loyal lover makes her exchange with him all the more heartbreaking. She begs Jon to keep his heritage a secret, and as he honorably equivocates, she turns her breathless exhortation into a steely ultimatum. She’s not wrong either: Jon tells Sansa, for some reason trusting that she’ll keep his secret, and she in turn tells Tyrion and, by extension, Varys (Conleth Hill). The more loyal allies that Daenerys loses, the more aware she is of how disliked she is by those she’s worked alongside, and how tenuous her position is with them. Indeed, she looks quite uneasy when others look first to Jon and not to her.

But “The Last of the Starks” still doesn’t carve enough room for such quiet developments, because it must tend to bigger, more hastily assembled ones. There’s no time to focus on Daenerys’s simmering anger, her losing faith in Jon. Nor does the episode care to underline the point that both she and Cersei (Lena Headey) as similar on account of the hard decisions they both make to remain in power: Daenerys cruelly pushing weary soldiers south and Cersei filling King’s Landing with, essentially, naïve refugees/hostages.

Instead, Varys jumps directly to talk of sedition when he hears his queen speak rather abstractly of destiny. We don’t get to see much of the battle between Daenerys’s naval forces and those of Euron Greyjoy (Pilou Asbæk). Ambushed, Daenerys abruptly loses one of her two remaining dragons (conveniently not the one she’s riding) to the scorpion ballistas seen in “The Spoils of War,” and the next thing we know, Missandrei (Nathalie Emmanuel) alone becomes Cersei’s captive, while Grey Worm (Jacob Anderson), Tyrion, and Varys are seen washing up ashore, otherwise unharmed and un-pursued.

It’s hard not to see this all as perfunctory, and the staging of the final scene’s attempt at diplomacy certainly doesn’t help, with contingents from the two armies patiently staring one another down. Despite having been burned by Cersei twice before on the very subject of her unborn child, Tyrion begs her to surrender peacefully. It’s almost as if he’s speaking a different language when he earnestly says, “I don’t want to hear the screams of children burning alive,” to which Cersei’s hand, Qyburn (Anton Lesser), dispassionately agrees, “No, it is not a pleasant sound.” We’ve hardly seen Cersei in this final season, with so much of the focus on Winterfell, and so there’s nothing to indicate that she might now, suddenly, see reason, or that she’s not the very monster that Jaime has acknowledged her to be. (The only question, perhaps, is why she stops only at having Missandrei beheaded, and not also Tyrion.)

Earlier in the episode, Bran (Isaac Hempstead Wright) tells Jon that he has a choice: to either tell Arya and Sansa that he’s actually Aegon Targaryen or to bury that secret. But does he actually have a choice? We have seen that Jon is too stupidly stubborn—and to the point of being stabbed to death—to do anything but what he thinks is right, just as we know that Cersei will never surrender the throne, not just because of her character, but because it would bring an end to the series at least an episode too early. Game of Thrones appears weakened the closer it draws to the end, for it no longer allows its characters to surprise us, and without that most human of traits, we’re left with something closer to Game of Drones.

Review: In Season Two, Fleabag Remains Authentic in Its Messiness

Review: Chernobyl Is a Stark and Haunting Historical Drama