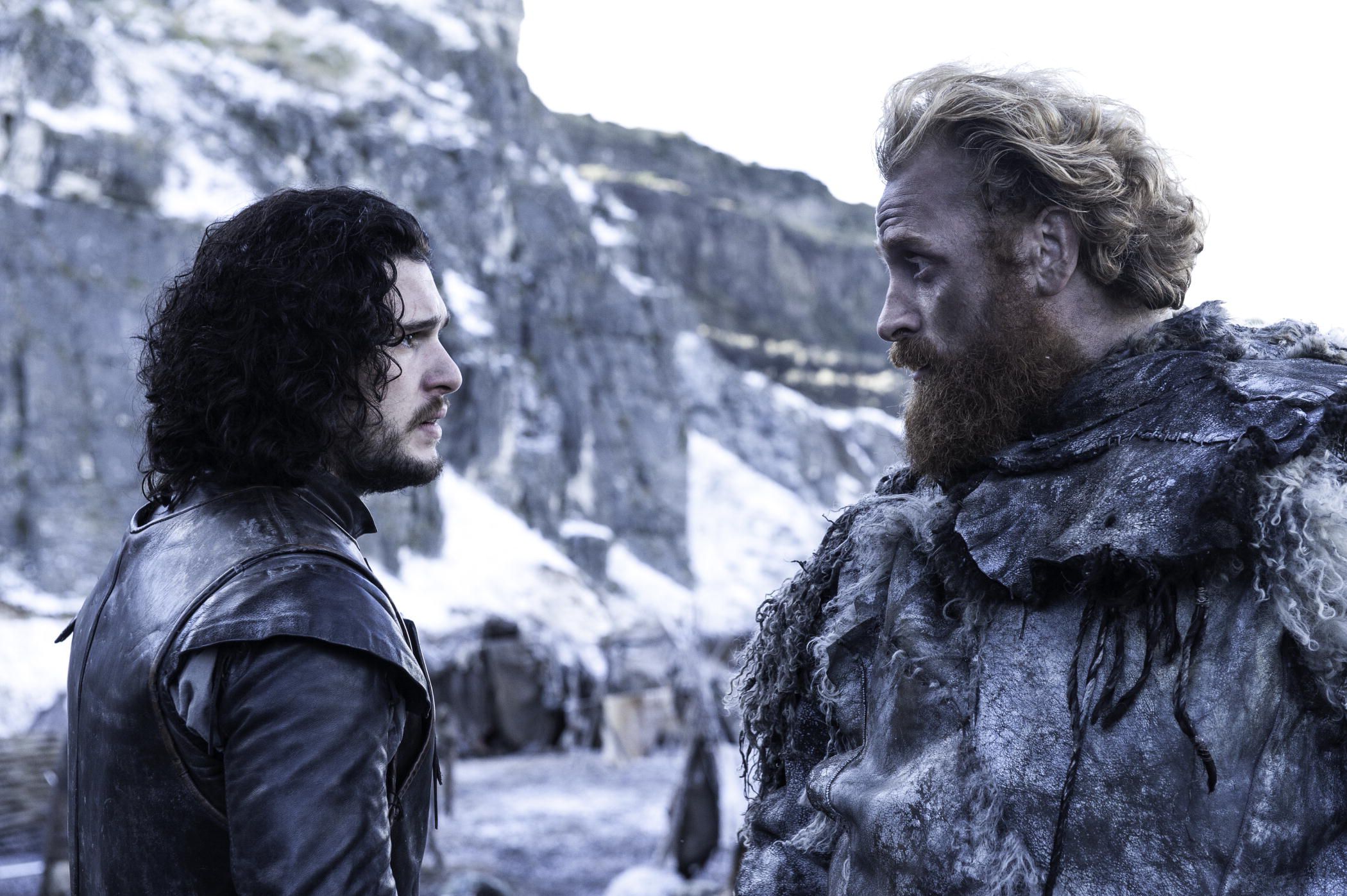 If there’s one thing the frenetic White Walker-packed climax of “Hardhome” proves, it’s that at the end of the day, talk is cheap. Sam (John Bradley-West) can do his best to convince Olly (Brenock O’Connor) that Jon Snow (Kit Harington) has made the right decision in heading north of the wall with Tormund (Kristofer Hivju) to acquire the help of the Wildling tribes gathered in Hardhome, but those words mean little balanced against the visceral images imprinted into Olly’s mind of his innocent family of farmers being butchered. Likewise, though Tormund explains to one particularly trash-talking Wildling elder, the Lord of Bones (Ross O’Hennessy), that Jon Snow just wants to talk, it’s not until Tormund thrashes the man with his own bone-carved staff that a “conversation” can begin.

Even Jon’s promises of dragonglass weapons for the Wildlings, arable lands south of the Wall, and a future for generations of their people to come only have an impact on half of the gathered clans, mainly the ones led by people like Karsi (Birgitte Hjort Sorensen), who has children of her own to look out for. The fierce Thenn warrior Loboda (Zachary Baharov) would be much happier to put out Jon’s eyes with a knife than accept any favors. And yet, when the White Walkers suddenly attack, falling upon the village like an avalanche of rabid corpses, Loboda joins Jon as a brother-in-arms; Jon’s trustworthy friend from the Wall, Edd (Ben Crompton), no longer has an ounce of skepticism about the threat beyond the Wall.

However much history of bloodshed might exist between the Crows who man the Wall and the Wildlings who were unfortunate enough to be born on the other side of it, that distrust dies in a moment when weighed against the immediate threat of an undead army. Before the attack, there was comedy in the differing views of this alliance, with Loboda noting that “My ancestors would spit on me if they saw me break bread with a Crow,” and Karsi cleverly replying, “So would mine, but fuck ‘em, they’re dead”; after the attack, the episode ends only with a lengthy stretch of silence, as Jon’s boat full of refugees pulls away from a shoreline littered with new “recruits” in the White Walker army—those who died in the midst of retreating. Talk didn’t convince those Wildlings to join the White Walkers—death and the mystical powers of the blue-eyed zombie leader (Richard Brake) did, just as those who joined Jon were spurred as much from desperate fear of death as anything else. Even the fabled dragonglass ends up being inconsequential: Valyrian steel is what Jon uses to defeat an elder White Walker, shattering the monstrous creature through dumb luck.

Another corollary to this lesson that’s picked up by Sansa Stark (Sophie Turner) in Winterfell is that actions are what define us, not words. In “The Gift,” Sansa turned to the man she once knew as Theon (Alfie Allen) in the hopes that he would help her convey a message to her northern allies, and help her strike back against her poisonous husband, the rapist Ramsay Bolton (Iwan Rheon). But after Theon confesses her request to Ramsay, Sansa has nothing but disgust for this man, the backstabber who murdered her brothers Bran and Rickon. As she learns here, however, Theon has real remorse for what he did, so much so that he believes he’s deserved the torture Ramsay has inflicted on him, the way in which all the pieces of Theon were literally and metaphorically cut out of him until he became nothing more than Reek, Ramsay’s plaything and servant. And if there’s anything that can save or redeem him, it’s his confession to Sansa that he didn’t actually murder Bran and Rickon; words, in this case, have served to recast actions.

On the other hand, the imprisoned former queen Cersei Lannister (Lena Headey) has failed to learn anything about either her actions or words. Each day, she’s confronted by her warder, the septa Unella (Hannah Waddingham), and promised water (and leniency) if she will confess her sins. Instead, she concocts revenge fantasies. She has no actions to take, and her threats have failed her utterly. Her old Small Council ally, Qyburn (Anton Lesser), tries to warn her that the faith will hold her to different standards than the crown, but she continues to defend and cling to her own poor decisions. Qyburn may have been talking about the rise of the Sparrows when he notes that “Belief is so often the death of reason,” but the same applies to Cersei’s own self-righteous zealotry. Words and logic are the luxury of reason; action is the cornerstone of belief.

One need look no further than Arya’s (Maisie Williams) continuing training within the House of Black and White to see this in action. It’s not enough for her to profess to the man she knew as Jaqen H’ghar (Tom Wlaschiha) that she’s nobody; she must prove her worth to the many-faced god by assuming the role of an industrious oyster salesgirl and then murdering a gambler who’s been reneging on life insurance bets (as the dead cannot collect on behalf of their families). For weeks, she’s told H’ghar that she’s ready; now she’ll either be as much, or she’ll die: “It is all the same to the many-faced god.”

All of this leads to the episode’s final set of examples: the much-awaited meeting between Tyrion Lannister (Peter Dinklage) and Queen Daenerys (Emilia Clarke). It’s hard to say what exactly convinces Daenerys to accept Tyrion as an advisor, but it’s based entirely on what Tyrion has done rather than anything he says: As Tyrion puts it, their situations have made them both “terrible children of terrible fathers,” and that’s okay, so long as their actions are the right kind of terrible—i.e., those that stop others from being even worse. (In Daenerys’s case, this involves the abolition not only of slavery, but of the wheel-like system of governance, in which several powerful houses forever dictate the rules, leaving the commoners to be perpetually run over.)

With that in mind, Tyrion’s first bit of advice is to compromise on the issue of Jorah Mormont (Iain Glen). While it’s true Daenerys swore to kill the man—a former spy—if she ever saw him again, Tyrion also recognizes that Jorah is devoted to, if not also besotted with, her, and that it sends a poor message to murder your most loyal servants (as occurred earlier this season when her execution of Mossador caused riots throughout Meereen). At the same time, Jorah cannot be allowed to remain by Daenerys’s side, as his once-traitorous actions continue to haunt him; instead, the man is re-exiled. With words and actions having both failed him, Jorah chooses—of his own accord—to become the slave of Yezzan zo Qaggaz (Enzo Cilenti), so long as he gets the option to fight for his queen one last time in the fighting pits. We may not be able to choose how we live, but—judging by Jorah’s grim assessment of his greyscale-infected arm—even when both actions and words fail, we can at least choose how we die.