“You Are My Star” is a song by the voice actor for the character of Yoko Littner, a woman whose early presence in the anime is almost entirely as a fan service delivery vehicle. If the video has a “plot” to it, one could describe it as the character realizing in a moment the myriad ways that her life could go (or could have gone) and taking solace in her own choices due to that fact. If we take that idea as a given, then the video could take place almost without editing during the show’s twenty-sixth and penultimate episode, when the cast is trapped outside of the flow of time and experience a more literal presentation of the same idea.

The twenty-sixth episode of one of GAINAX’s earlier anime programs, Neon Genesis Evangelion, is (in either its original incarnation or using the End of Evangelion film as its reworked final episodes) the show’s final chapter, in which its protagonist Shinji Ikari comes face to face with an alternate version of his own world. This cannot be viewed as a coincidence—Tengen Toppa Gurren Lagann is a program, after all, that features an episode that timed a plot point to be exactly 108 seconds after a commercial break in order to evoke the 108 sins or earthly temptations in Eastern traditions.

Tengen Toppa Gurren Lagann is very much a response to Neon Genesis Evangelion. American fans of my acquaintance have largely agreed to a comparison in terms of western comics: If Evangelion is shonen giant robot fare through the lens of Alan Moore, a dissection and a dangerous swerve towards an underlying emotional reality, then Gurren Lagann is the same material through the lens of Grant Morrison: reactionary in part, but a distillation, mad and a little messy but more fun and a reminder of the original concept’s power with a modern (and occasionally postmodern) gloss. (The image of Yoko in the virtual reality tank in the music video even inadvertently recalls Morrison’s counterculture opus The Invisibles, in which a very different redhead uses the system to, appropriately enough, rewrite her own history).

That the music video is blatantly silly and ludicrously over-the-top is perfectly in line with the series that inspired it. Tengen Toppa Gurren Lagann was once well-described as “what happens when you ask Studio Gainax to create a Saturday Morning Cartoon.”

The story is about a timid boy named Simon in a sequestered underground colony who discovers a mech with special powers, and with it comes to an oppressive, war-torn surface world that, in typical unlikely-hero fashion, he must liberate with the help of the ragtag group he collects along the way. The trick to the story is that Simon’s victory is actually only the halfway point of the story, and the story’s themes only become clear once this initial quest is past. The visual motif of the spiral (tied in with the plot-driven magical energy that imbues the characters) is also a graph for the plot’s construction: everything builds exponentially, so that challenges that initially take an episode or more to overcome soon become the matter of a few seconds’ work and distances that take a season’s length to traverse become minuscule once all of space and time become traversable (and traversed) by the show’s final act. Similarly, the robots continue to grow and add onto each other, such that a car-sized mech at the beginning eventually becomes the core of a machine the size of an entire galaxy.

That the “spiral power” represents evolution is where the thematic backbone becomes clear. That the heroes represent evolution itself, and thus forward progress, becomes interesting when viewed in comparison with their villains, particularly those in the second half. The primary antagonists in the second half of the series oppose evolution as being inherently destructive, but their modus operandi is based entirely on despair as the show-specific antithesis of evolution. These enemies resemble mechs from Evangelion beneath their CGI effects, clarifying that the show views Evangelion itself to be representative of despair. The show as a whole actually mirrors the history of mecha-themed cartoons in Japan, and so Evangelion’s “dissection” view of the genre is here portrayed as a negative end-point. In casting their earlier work as opposition, GAINAX calls for a revival of the genre’s roots as escapist fantasy, and subsequently argues for that fantasy’s validity.

And so back to the music video. Like the show, its mission statement (to the extent that it has one) is that “the over-the-top fun is okay, because that’s who we are, and that’s great; and the depth is buried deep under, if you want to go looking for it.” The character of Yoko Littner appears in the early episodes largely for the sake of being sexually attractive—in the beginning, the emergence of Simon from his small community coincides with puberty, represented by the appearance of this overly-iconic sexual figure. But as the show progresses, she becomes first a love interest for a different character, then slowly recedes as the story gets away from her. But as the show reaches its climax, Simon and his supporting cast, including Yoko, are in a realm of pure possibility, trapped by other lives that they could have led. It is designed to be “The Life Trap,” a device of perfect despair, and in Evangelion (depending on the iteration, and depending upon your interpretation) Shinji Ikari succumbs to the trap. However, in Gurren Lagann, it barely slows the characters down. And we take time out to sit with Yoko as she is presented with a series of lives that she could have led: as a sex object, as a warrior, as a wife, many of the iconic views of womanhood, and it is then that it is clear that the show subtly, over time, established that Yoko (like, of course, any other woman) indeed contains all of these and more; and knowing this, she is fine with the life that she’s chosen to lead. She steps out of the trap grateful to have been presented with this vision.

Tengen Toppa Gurren Lagann, through its theme of evolution as represented by the specific genre that they’re embodying, relates the joy in over-the-top entertainment to mankind’s ability to push forward past despair, and in doing so is fairly savage to a worldview initially propagated by a watershed work from their own studio. The show begins with a prologue set in the future, in which the world outside of our knowledge is full of enemies; by the time the show concludes, it has realized that scene with a slight change—that instead the world outside is merely hopeful possibility. “The lights in the sky are our enemy” becomes “The lights in the sky are stars,” where it’s been established there are new friends to meet, others who share the “spiral power” of evolution and spirit. Or as in the song, with the star as the symbol for long-held love.

In being innately hopeful within a framework of genre fiction, in empowering through fantasy, the show stands out in a medium that increasingly finds itself emotionally hollow, save the work of a spare few masters—Miyazaki, Kon, Anno, Oshii, Watanabe—many of whom have turned inward in recent years (Paprika, The Sky Crawlers) or are content to repeat themselves (Rebuild of Evangelion, Howl’s Moving Castle). It’s comforting to know that someone, at least, is still awake at GAINAX and remembers the joy inherent in fantasy.

Idiot Savant Japan: “What The Hell Are You Watching?” 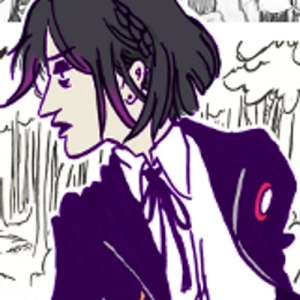