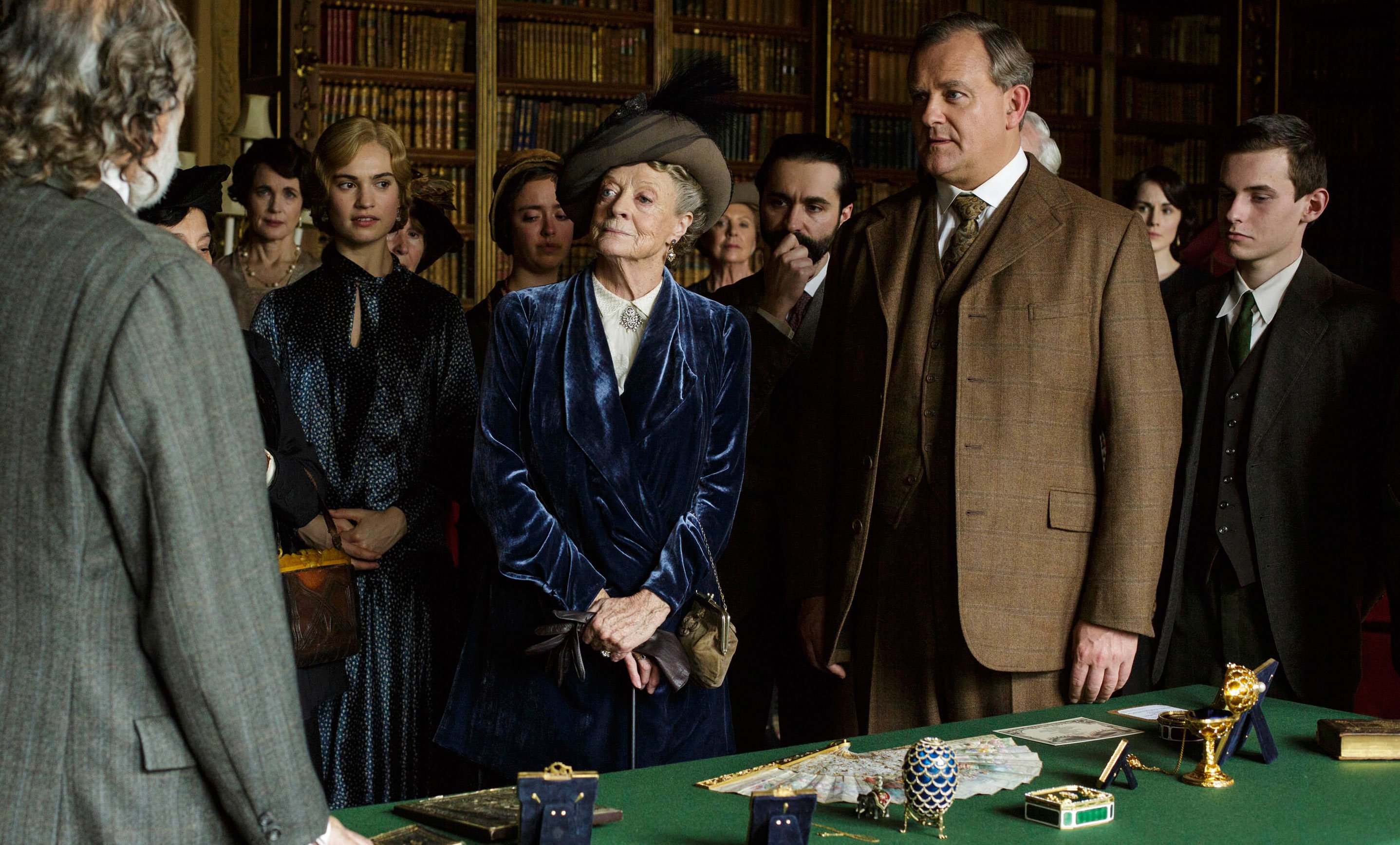 Long before the king’s speech comes over the wireless, in the second episode of Downton Abbey’s fifth season, the specter of revolution is nigh. From the use of birth control to the rise of Nazism, the world beyond television’s most famous fictional manor threatens to come apart, yet Julian Fellowes’s period piece slips into somnolent rhythms. Sumptuously decorated and periodically sparkling, the series still goes down easy, but its anxieties, dalliances, and perfidies now seem rather threadbare. Lord Robert Grantham (Hugh Bonneville), debating the purchase of the wireless with cousin Rose (Lily James) and his wife, Cora (Elizabeth McGovern), even makes a stab at knowing humor, but his unfavorable assessment describes Downton Abbey’s lackluster dramatics all too closely. “I find the whole idea a kind of thief of life,” he says. “That people should waste hours huddled around a wooden box, listening to someone talking at them, burbling inanities from somewhere else.”

To wit, stalwart butler Mr. Carson (Jim Carter) rehearses the central theme within the opening minutes of the season premiere. “I feel a shaking of the ground I stand on, that everything I believe in will be tested and held up for ridicule over the next few years,” he confesses to housekeeper Mrs. Hughes (Phyllis Logan). “The nature of life is not permanence, but flux.” Though the new season, set in 1924, is livelier than the fourth, such flaccid passages display a seriousness of purpose to which Downton Abbey has always been ill-suited. (Remember the dreadful “wrong man” arc involving Brendan Coyle’s unlucky valet John Bates?) Though duty-bound to pursue last season’s most troubling developments, the rape of lady’s maid Anna Bates (Joanne Froggatt) and the disappearance of Lady Edith’s (Laura Carmichael) intended in Germany, the series hedges, evincing a certain discomfort with the grittier implications of its own narrative. By the time these subplots round into form in the season’s second half, they’re airless, almost theoretical exercises, more interested in aphoristic statements about “the nature of life” than the messy flux itself.

If Downton Abbey indulges in more than its fair share of laborious ideological dithering, exemplified by a series of dinner-table disagreements involving Lord Grantham, his widowed son-in-law, Tom (Allen Leech), and Tom’s socialist comrade, Sarah Bunting (Daisy Lewis), the show offers a more precise rendering of class status and sexual politics when it embraces the shallows of privilege. “Principles are like prayers,” the Dowager Countless of Grantham, played by the superb Maggie Smith, warns to this effect. “Noble, of course, but awkward at a party.” Lord Grantham calls Bunting a “tin-pot Rosa Luxemburg”; the lords and ladies of Downton stand in deference to the king as his voice plays on the wireless; and Lady Mary’s (Michelle Dockery) hairdresser turns out to be a Cockney bloke with a put-on Parisian accent. Such telling, humorous details sketch the bright line between upstairs and downstairs with beautiful economy, even as the lion’s share of the writing is as stale as an old crumpet.

Similarly, Mary’s ongoing flirtation with “the lithe and supple figure of Tony Gillingham” (Tom Cullen) proves a better yardstick of changing mores than the dour tale of Edith’s infant child, born out of wedlock and shuffled off to a neighbor’s farm. Embracing Tony’s “scandalous suggestion,” Downton Abbey transforms Mary’s familiar willingness to toy with men’s affections into an illicit thrill, all the more effective for rejecting hardened convictions about sex, marriage, and motherhood in favor of the slipperiness of desire.

Unfortunately, these flickers of the show’s once exuberant energy are too few and far between to sustain the viewer through extended stretches of flagging interest. By the time the village unveils a World War I memorial in the penultimate episode, its construction guided by Mr. Carson, Lord Grantham, and a committee of townspeople, Downton Abbey returns to the conflict whose outbreak concluded the first season, only to reveal that the more things change, the more things stay the same. Mrs. Patmore (Lesley Nicol) rails against modernity, Daisy (Sophie McShera) aches for adventure, and Thomas (Rob James-Collier) schemes at every turn: For many of the Abbey’s residents, the defining feature of Edwardian Britain is not revolution, but stasis. Closing the circle on the Great War suffuses this and the annual Christmas special with a sweet, elegiac glow, but the reminder of former glories is too little, too late. It turns out that time has passed Downton Abbey by in more ways than one.