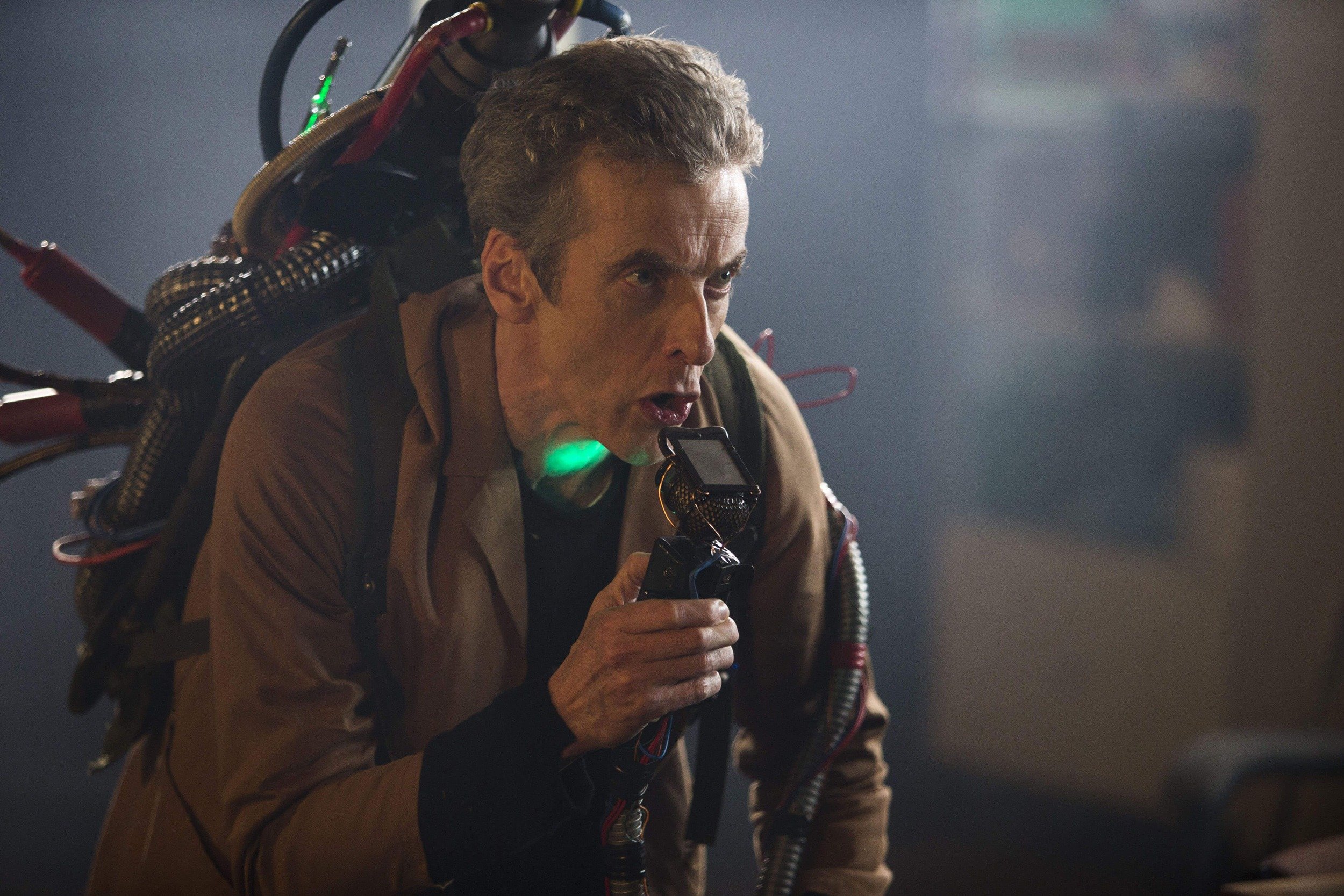 “The Caretaker” is another mostly light-hearted script from Gareth Roberts. But this time, the sitcom trappings are attached to important developments in the ongoing plot threads running through the eighth season of Doctor Who (hence another co-writer credit on this episode for showrunner Steven Moffat). Although the Doctor (Peter Capaldi) has an alien menace to confront, the heart of the story is the clash with Danny Pink (Samuel Anderson) that we’ve been anticipating ever since the character first appeared, with Clara (Jenna Coleman) caught between them.

At the start, Clara is still managing to keep her two lives separate, jumping between madcap adventures with the Doctor and dates with her boyfriend, with only the odd unexpected suntan or seaweed-festooned dress to explain away. But she finally comes unstuck when the Doctor identifies an extra-terrestrial threat near Coal Hill School, where Clara and Danny teach, and decides to deal with it without involving her. From the moment she sees him in “deep cover” (which means he changes his coat and passes himself off as a replacement school caretaker), her control-freak personality is thrown into exasperated confusion, even before Danny becomes suspicious of “Mr. John Smith” and starts investigating on his own account.

The threat itself, a robot called a Skovox Blitzer, is not one of the most convincing monsters the series has presented. Because it looks more like an oversized wind-up toy than an unstoppable killing machine, it’s very hard to believe the Doctor’s contention that the thing is a menace to the entire planet. On the other hand, he’s clearly right when he complains that if only he’d been left alone, he could have dealt with the problem without breaking a sweat. Even after Danny’s interference ruins the Doctor’s first attempt to despatch the robot, he’s able to come up with a backup plan that works fairly easily.

This episode gives Capaldi his best opportunities yet for comedy, both physical (such as fending off an advancing Clara with a broom) and verbal (like the relaxed banter between them in the TARDIS at the start). When the Doctor finally realizes the truth about Danny, lines like “It’s a mistake. You’ve made a boyfriend error!” could have come straight from Moffat’s sitcom Coupling. He also strikes up a nice rapport with a pupil of the school, Courtney (an excellent, natural performance by novice actor Ellis George). Evidently the Doctor recognizes a kindred spirit in this girl who’s been labeled a “disruptive influence”: He’s quite happy to show her the inside of the TARDIS, and even tells her, “I may have a vacancy, but not right now,” before giving her an actual trip in the time machine at the end, when he disposes of the defeated Skovox.

The Doctor’s treatment of Danny, on the other hand, isn’t funny at all. This new Doctor’s visceral dislike of soldiers has been evident since “Into the Dalek,” and here he takes a rather petty delight in continually referring to Danny as a P.E. teacher, refusing to acknowledge that a former soldier could teach mathematics. Given that in the classic series the Doctor’s closest military friend, Brigadier Alastair Lethbridge-Stewart, did exactly that (in 1983’s “Mawdryn Undead”), the audience is clearly not meant to be sympathetic to this prejudice. Whether it’s some carryover from his experiences in the Time War (though “The Day of the Doctor” seemed to resolve that part of his past), or the hundreds of years he spent on Trenzalore as a warrior defending the town of Christmas before his last regeneration, the series is taking a risk with making the Doctor unlikeable in such a way. Capaldi and Anderson both bring great intensity to their angry confrontation in the TARDIS, as Danny gets under the Doctor’s skin by pretending to be a subordinate saluting an officer. We know that Danny has some trauma in his past, and it seems like he’s speaking from experience when he tells Clara, “I’m the one who carries you out of the fire; he’s the one who lights it.”

Ironically, the element of the Clara/Danny relationship that’s hardest to swallow is that the pair are deeply in love. Whether it’s because their first kiss was only two episodes ago, or because the on-screen chemistry between the two actors isn’t particularly outstanding, it feels like we’ve missed something when Clara suddenly declares to the Doctor that she loves Danny. By contrast, they do work well together in the scenes where Clara comes to understand how she has hurt Danny by keeping him ignorant of her experiences with the Doctor; there’s a particularly nice piece of direction with Clara looking into her troubled reflection in a darkened window as she answers his questions. By the end, they’ve successfully reconciled, and even the Doctor unbends sufficiently to concede that Danny helped to save the world (“It’s a good start,” he says).

And finally, the other ongoing plot thread of the season resurfaces, as a hapless policeman killed by the Skovox earlier (in an unexpectedly gruesome sequence too) arrives in the “Nethersphere” (previously referred to as “the Promised Land”), where the mysterious “Missy” dwells. There are still few real clues as to what’s going on here, but with Missy and her realm of the dead already known to be featured in the season finale, it seems that the Doctor has a nasty surprise waiting for him.

Next Week: Young Courtney finds herself taking an eventful trip into space, in “Kill the Moon.”

Classic Who DVD Recommendation: “Terror of the Autons,” from 1971, with Jon Pertwee’s Doctor working with the forces of UNIT (and introducing Katy Manning), provides an interesting contrast to this episode regarding the Doctor’s attitudes toward the military.