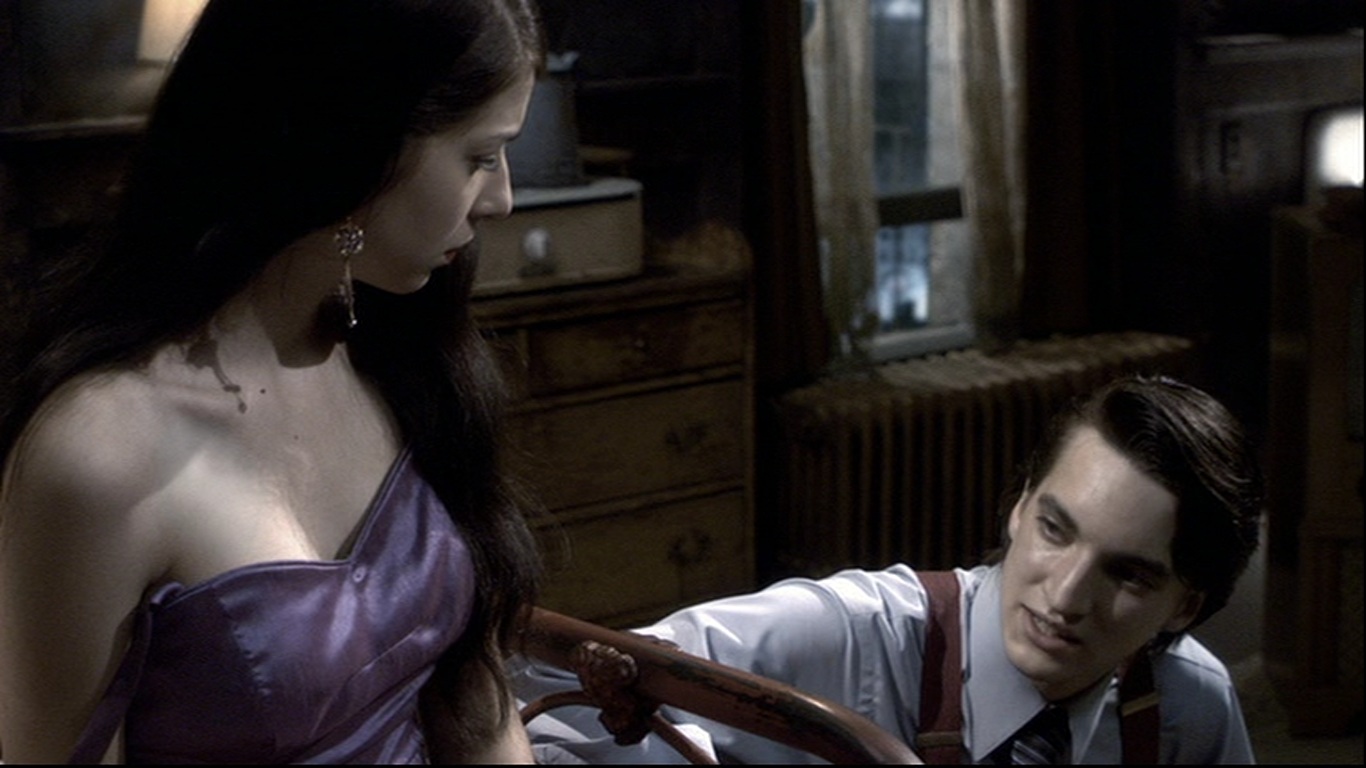 No, I didn’t give up after my misgivings with “Gravedancing.” Family and work obligations simply got in the way of writing up the subsequent episodes. But these last two—which in having Caprica move away from the overt Battlestar Galactica references inch the series closer to the spirit of its predecessor—were a vast improvement. Now is a great time to catch up with the series, which seems on the verge of turning a corner in terms of standing on its own. Syfy ran a marathon on Friday of the first season thus far, leading up to the newest episode, “The Imperfections of Memory,” which I’ll review here sometime between now and Monday. In the meantime, let’s play catch-up with my quick takes on the last two episodes.

“There Is Another Sky”

Joseph Adama’s grief over the loss of wife, Shannon, and daughter, Tamara, has caused him to neglect his young son, Willie. This has led his gangster brother, Sam, to step in as surrogate father for the future battlestar commander. This is a rather overt expression of the duality that the show’s creators are bringing to the fore. I’ll point out other examples along the way, but suffice to say that there seems to be a very precise opposite number to almost every significant character on the show, which goes beyond simple black-hat vs. white-hat and more into the unexpected virtues of one character versus the surprising flaws of another. In this case, Joseph’s general ambivalence seems to be a fundamental character flaw that drives his son to the more decisive Sam. The rift between father and son this seems to be leading up to is mirrored by the rift between BSG’s now-grown William and his own son, Lee (who more resembles the tentative Joseph).

Meanwhile, the Tamara avatar (Tamara-A) falls afoul of the seedier side of the V-world, New Cap City, a Sin City-by-way-of-Fight Club-like underground where avatars de-res when they are shot. However, Tamara-A can’t get out of V-world, and she can’t de-res. So some of the more crooked denizens of V-world delight in the idea that she may be the mythical “sleeper” who is stuck in the holoband because she can’t wake up in the real world. Tamara-A has grown up some since she first awoke in the V-world. She is saavy enough to work out some “quid pro quo” help from the manipulative gang mistress, Vesta (Camille Mitchell). Tamara-A will use her special virtual indestructibility to help Vesta win the New Cap City game as long as Vesta helps her get back home afterwards. Shades of The Matrix.

The third subplot involves Daniel Graystone’s fight to retain control of his company after unilaterally deciding he would give up profiting off the holoband during his appearance last episode on Backtalk with Baxter Sarno. The best scene of the series so far has to be Daniel’s face-off with his executive board. Here he brings the U-87 Cylon prototype into one of the most impressive, intimidating, fascistic sets this side of Bertolucci’s The Conformist—a boardroom with a huge floor-to-impossibly-high-ceiling picture window overlooking Caprica City—and it’s Daniel who definitely has the edge. The look on Zoe robot (Zoe-R) as her father tells her to rip off her own arm (in a frightening use of visual aids to convince the board) speaks volumes. You can see the subtle yet perceptible shift in actress Alessandra Torresani’s face as it dawns on her that Daddy hopes to mass produce a subservient robot class, and she realizes each will need her special “essence” in order to work properly.

1. New Cap City is a darker, slightly more retro version of Caprica than we’re used to. The effects work really sells it.

2. Does anyone else think Richard Harmon (who plays Tamara’s would-be savior Heracles) looks like a dorkier Robert Pattinson (Twilight)?

3. Young Sina Najafi follows in Edward James Olmos’ footsteps quite well. Willie Adama doesn’t start fights, but he sure knows how to end them.

4. The Tauron funeral ceremony for Shannon and Tamara evokes the Greek myth of Charon with its coin ritual.

6. Genevieve Buechner proves to be as powerful a young actress in Tamara’s avatar mode as Alessandra Torresani does as the Zoe-avatar. More mirroring?

7. We again hear William Adama’s flute theme grow out of the melody used during the Tauron funeral ceremony.

8. The cruel black humor often displayed by the writers in BSG rears its head again. It figures Joseph would find out Tamara-A still exists just as he commits to letting go of both his deceased daughter and wife.

9. Joseph needs to get in shape. Heracles smokes past him in the alley.

10. Great final shot with a gun-toting Tamara-A walking down her own virtual alley (a mirror to the real-world alley Joseph just ran down in the prior scene) in New Cap City.

This episode opens in Tauron City at the Vergis Corporation a month back, where two men were killed so that the MCP chip could be stolen for Daniel to use in the U-87 Cylon Project. Pyper-Ferguson brings a much-needed heft to Caprica as Vergis, Daniel’s opposite number, a self-made Tauron that, unlike Joseph, has not forgotten his roots. He confronts Daniel about the theft almost as an aside to his goal of buying Daniel’s pyramid team, the Caprica City Buccaneers.

Yet another STO bombing occurs, this time a holocafe. With that we are introduced to the bomber, Barnabas Greeley, and discover even the STO has factions at crosspurposes. But we don’t get to know the mysterious Greeley as well as Vergis, at least not yet. His character’s committed single-mindedness does seem comparable to that of Sister Clarice, if slightly more dependent on violence.

Clarice and Amanda are also illustrative of the duality theme, both mothers (one biological, one surrogate) to Zoe. A scene between the two further reinforces their connection, with both sharing an appreciation for the repulsive sounding Scorpion Ambrosia (it smells like sulfur). Clarice takes advantage of their connection to retrieve the data that encapsulates Zoe’s avatar from a computer in Daniel’s lab, hoping to enact the next step in the “apotheosis” mission that the mysterious Arvo sent her on in an earlier episode.

Later, when Vergis takes his smooth act to Sarno’s show and admits he is seeking Caprican citizenship, one gets the sense it is for no other reason than to take a calculated step in his revenge against Daniel. Indeed, his final conversation with Daniel confirms this when he says this of Daniel’s love for his C-Bucs, “It’s your dream. My dream is to tear up your dream. You stole from me…” He then breaks out his Tauron ink to intimidate Daniel, giving us an amazing monologue, “You need time and money to try and get my chip to work. So frak the 300 mil. I’ll give you 500. I’ll take the team. I don’t know if I’ll ruin them or win a championship, but… whatever cuts you deeper. Then, I will find the next thing you love. Eventually, I will destroy your company. But before that, you have so many precious things…until the debt is paid.”

1. Too bad Joseph’s new holoband comes packaged in one of those annoying blister packs. I feel his frustration as he struggles to tear into it.

2. How disconcerting would it be to speak to a Daniel-Avatar on the holoband, and have the virtual device pulled off by the real Daniel, like what happens to Joseph?

3. Nerdy Philo could be a younger version of Daniel. So Daniel’s admonishment for him to stop smoking in the lab would be just the type of thing to incite an attraction for the guy on the part of Zoe, a girl with serious daddy issues.

4. Barnabas belongs to an Opus Dei-like faction of the STO which promotes the idea that suffering is good for the soul. Barbed wire around the arm…ewwww.

5. Clarice collects the data off the computer in Daniel’s lab. Does this mean she could be getting more than she bargained for in the form of plans on the Cylons?

6. Lacy’s a tough girl. She seems unafraid to stand her ground when facing up to Barnabas.

7. Zoe-R seduces Philo into meeting her (as Rachel) in V-world through a dating site. How’s that for a twist on dangerous individuals looking for innocent prey on the net? But is she doing it because she needs a friend or…

8. How will Clarice’s addictions play a part in the genesis of the Cylon race?

9. Joseph’s assistant, Evelyn, is back to help him find Heracles. Her interest in his tattoo, and the quick intimate moment between them indicates she indeed could be Willie’s future stepmom.

10. This second (non) appearance of Arvo has me suspecting he/she will turn out to be a character we’ve met on BSG.