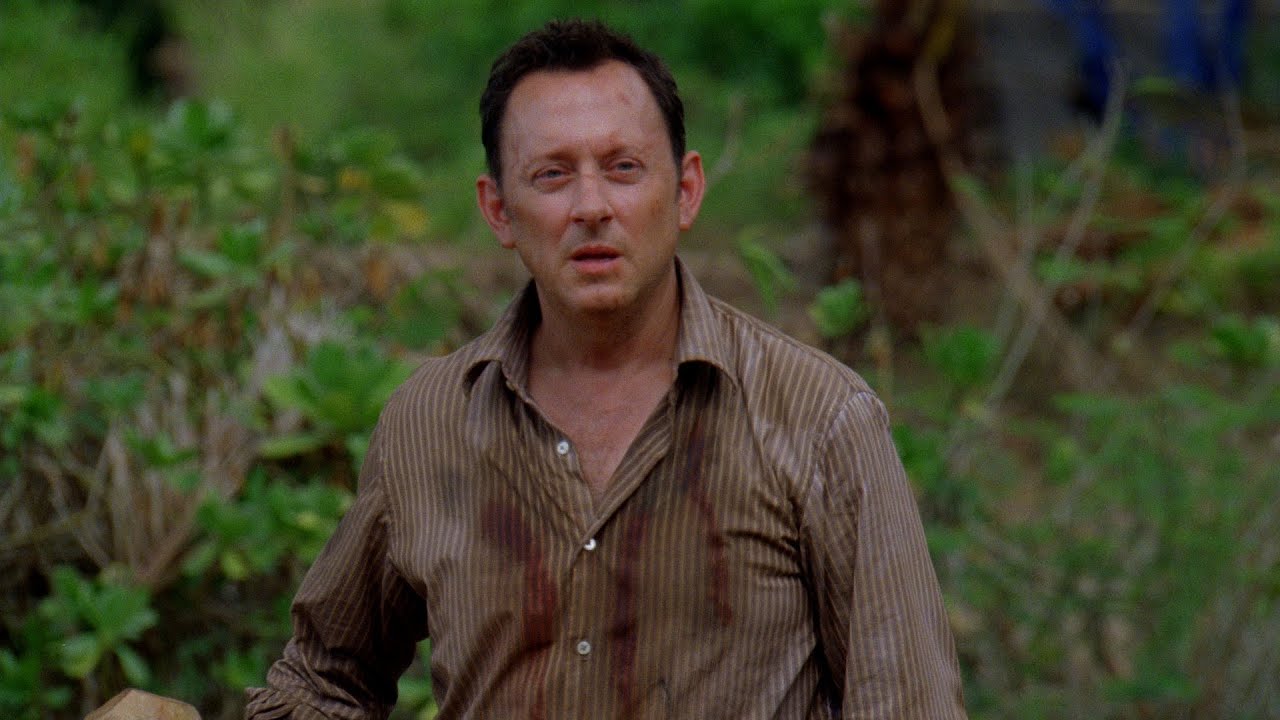 This week’s episode would be nothing but cheese were it not for Michael Emerson as Ben, or Dr. Linus, and his skills to invest every little gesture with character. I’m sure our history with the character plays a part in his performance (we know how his face has changed, or what happens when we watch it change), but there’s a lot going on in Ben in this episode. Emerson gets to flex all kinds of adjectives: plain sad, indignant, obsequious, desperate, dismay, righteous, sorrow, shame, and sheepish. It’s just the right amount of showy to get all kinds of attention. And it’s deserved. After all, it’s a redemption episode that hinges on a confession.

Again, you couldn’t believe the promos’ hint that Ben would actually meet his demise. Or did they say face his demise? Either way, it didn’t shock me that he got his redemption both on the island and off. In fact, it pleased me. Aside from Locke, Ben’s the most interesting character on the show by far. A lot of it is due to Emerson, yes, but it’s also because he’s one of the few whose trajectory has been yanked around in compelling ways. Not all signs pointed to an episode like this one, though, again, it doesn’t surprise me. Ben’s gone from plain evil to halfway sympathetic to full on audience surrogate at different moments. In this episode, though he tries to lie as is his wont, he’s mostly on the right side of things.

What’s troubling about all this, and the overall tone of this episode, is just how sweet the show can get. I don’t want everything to turn out okay. That’s why last week’s mayhem was so exhilarating. Lindelof and Cuse seem to really believe in evil as much as in goodness. The stakes, here, really do matter. Which is why Charles Widmore appearing in a submarine off the coast is so cool. (Also, hilarious. The music underneath that periscope’s surfacing was great.) Now we’ll see if Widmore really is on the side of evil, or if he only saw the evil in Ben that Jacob had hoped would abate, or prove wrong. There are plenty of reasons why Widmore would side with The Man In Black (such as the interest in Locke, among others, as the perfect surrogate) but, as far as I remember, it has yet to be made explicit.

So I’m hoping, given the tone of the promos this week and that this episode was more ground work than actual plot, things get sadder before they get sweeter. It’ll be refreshing, almost, to see what this band of Dark Locke followers will do, or be bullied/inspired to do. For that matter, it’ll be interesting to see just how Claire versus Kate plays out given that Kate’s not a candidate and Claire’s clearly off the dark deep end of things. (Does the show have the balls to kill of Kate? Or, if not now, ever?) But back in the camp we were just in, it’ll also be interesting to see if they all embrace this new, humble Ben—if he’s let into the circle or not. Because he was certainly left out of the requisite slow motion hug and hand shake festival. (Which also gave us the biggest laugh of the season: seeing Hurley and Sun run at one another.) In fact, it was nice to see Jack size up Ben from a distance. Perhaps there will be a few more bad choices between them. And who in the hell knows what’s up with Richard at this point. Did Jack make a new believer of him? I kind of hope so, and I hope to see more of his story aboard the Black Rock.

The point is, as with all the set-up episodes (funny that this is reflected in the beach camp setting up camp, starting over again), I’m left with more speculation than concrete evidence. Which is why we keep watching, of course: the beyond brilliant baiting that these dudes have devised.

Here’s a few other talking points:

1. Tania Raymonde is beautiful and I’m sad we likely won’t see her as Alex again.

2. Ken Leung has been underutilized until this episode, in which he had two great moments. The first being his vision of Jacob’s death; the second his confrontation of Ben under Ilana’s eye. He’s a prime target to get offed but I’m pulling for him to stick it out, to not Faraday his way out of things and stick to Hugo like glue.

4. Sawyer’s talking to Kate in the promo, right? Do you think they’re gonna wind up together after all? I’d prefer that to her standing by Jack, but I still want her to die most of all. And I sure as shit don’t want Sawyer to stay on the island any longer.

5. Touching. I think Jacob physically touched all the Oceanic Six, but maybe he didn’t touch Kate? Does this mean they’re all immortal like Richard? Didn’t Jacob touch Ben right before Ben stabbed him?

Caprica Recap: Season 1, Episodes 5 and 6, “There Is Another Sky” and “Know Thy Enemy”