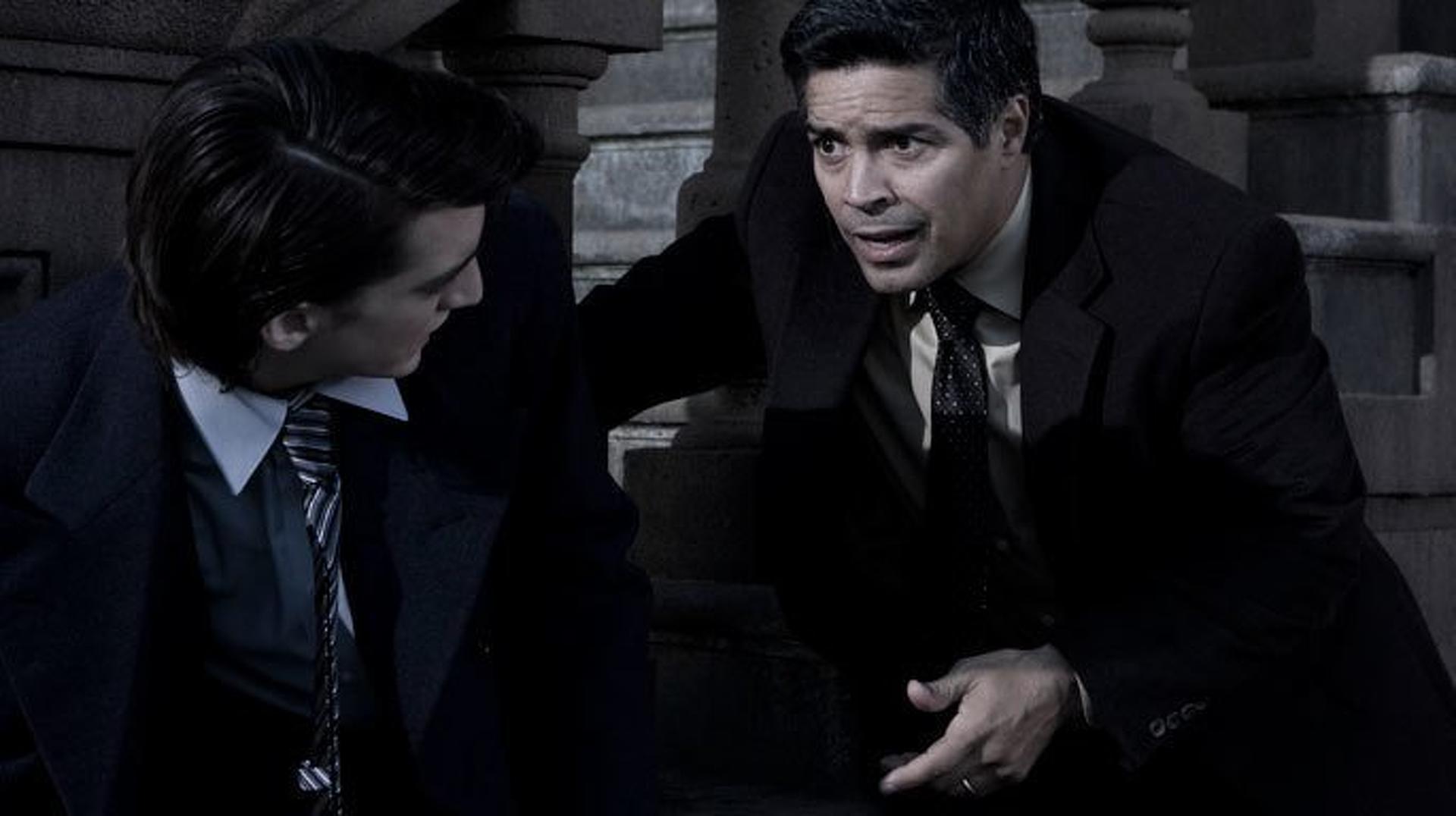 “The Imperfections of Memory” is a brief quiet moment before the next two episodes, what I expect shall be a far noisier wrap-up to the first half of Caprica’s season. It will return this fall to complete its first series, and the good news according to The Hollywood Reporter is that the show looks likely to be renewed. The even better news for the disenfranchised Battlestar Galactica fans who like a little “space” with their soap opera is that Syfy is hoping to get executive producer Ronald Moore to develop yet another BSG spinoff.

With Caprica’s fate currently looking somewhat safe, I guess I don’t have to fret that this last episode breaks the momentum which has been building. I can just enjoy some of the unusual ways this entry ventures outside some of the familiar territory it has comfortably settled in.

As the Graystone’s grief over Zoe’s death recedes just a bit (if not from their consciousness then from the show’s and its Caprican population), Amanda starts having visions of her dead brother, Darius. These hallucinations spur some desperate, wonderful dreamlike images that run counter to the crisp, concrete world established on the series so far, even in V-world. After Clarice runs into Amanda at the MagLev memorial, she learns of Amanda’s visions. This prompts Clarice to theorize that since Amanda can see the dead—and is mother to the messianic Zoe—God speaks through her the same way He speaks through her daughter. Clarice gives a rare bottle of Scorpion Ambrosia to Amanda in order to ingratiate herself, hoping to glean something from the oracular Graystone matriarch.

Amanda invites Clarice out, and they end up at the Caprican hash bar, Dive. The bond the two women have over their shared addictions provokes a confessional conversation on the part of Amanda, where Clarice learns that Amanda lost her brother in a car accident some years ago. This loss led to a break from reality, necessitating a 2 1/2-year stay at the Delphi Convalescent Institute. Clarice is no less revelatory in her addled state, letting slip her monotheistic beliefs in reassuring Amanda that God loves her and she must trust Him. Luckily, Amanda is too high to notice, replying, “Which god?”

Meanwhile, Zoe-A warns Lacy that Clarice is onto them, and they must speed up the timetable on their plan to get her/U-87 to Geminon. Zoe-A admits she is using the lovestruck Philo to get the U-87 out of the lab, but not whether she might be falling for him. She meets Philo for a virtual date, flying an early-model Colonial Viper jets in a neat effects sequence. Their date leads to a nerdy seduction where Zoe-A reveals her advanced intellect to the admiring Philo by suggesting that maybe duplication is not what should be sought in the mass production of the Cylons. Instead he should be looking at a form of generative procreation in which the template of one working Cylon can generate subtly different and unique copies. Zoe-A’s suggestion to Philo may backfire though, prompting him and Daniel Graystone to keep the U-87 in the lab longer for tests.

On the Tauron side of Caprica City, Joseph Adama seeks out Tamara’s virtual friend Heracles to help him find her in V-world. The stakes are raised when Heracles explains how careful they must be in the ultraviolent New Cap City, since once you die (or de-res) in the game you cannot return to it. Of course, Joseph is left alone to fend for himself in New Cap after Heracles is shot by a virtual bomber and de-reses. After failing to find any clue to his daughter’s location, Joseph meets the mysterious Emmanuelle (Leah Gibson), a woman Heracles sends to guide Joseph through V-world, but only after she extorts him for money.

And whither Daniel? Graystone Industries stock is in freefall. Tomas Vergis reveals the MCP Daniel has doesn’t work. Daniel takes Vergis’ revelation to his favor: If Vergis thinks Daniel’s MCP doesn’t work, then he must think Graystone Industries is in worse shape than it actually is. Daniel’s assistant Cyrus (the subtly fascinating Hiro Kanagawa) reminds Daniel that only one U-87 actually works. But after Daniel notices his dog behaving strangely around the robot in his lab, he makes a connection. If the MCP isn’t working for Vergis but is somehow working for him…maybe it’s not the MCP. The episode’s final line is uttered by Daniel—as he looks into the Cylon eye of the U-87—not as an interrogative but as a declarative, “Zoe.”

1. According to the invaluable Battlestar Wiki, the Delphi Convalescent Institute is the same place where Kara Thrace was violated by the Cylons in BSG’s “The Farm.”

2. Do Daniel and Amanda share an open marriage? That seems like the implication when she shows him the new bottle of Scorpion Ambrosia, and she imples someone special gave it to her. When he asks if he should be jealous, she responds, “I’m not sure.”

3. Interesting that Lacy makes a distinction between “original” Zoe and Zoe-A when she acknowledges she let the original down by failing to join her in their earlier flight to Geminon. Zoe-A does not make the same distinction, thinking of herself as one and the same as the original Zoe.

4. Is Geminon more accepting of monotheists than the other colonies? That’s the implication after Keon asks Lacy if she just wants to go to Geminon to practice her beliefs free from scrutiny.

5. Philo’s abrupt admission to Zoe, “I work with top-secret military robots,” is met with her impish response, “That’s really hot!” It’s a quirky exchange that inevitably leads the two nerds to makeout.

6. Since when do the Graystones have a dog? Did I forget him?

7. On Caprica, there is an old saying, “All this has happened before, and all this will happen again.” One would think BSG’s characters could have avoided a lot of heartache had they remembered this saying earlier in the show’s run (I kid).