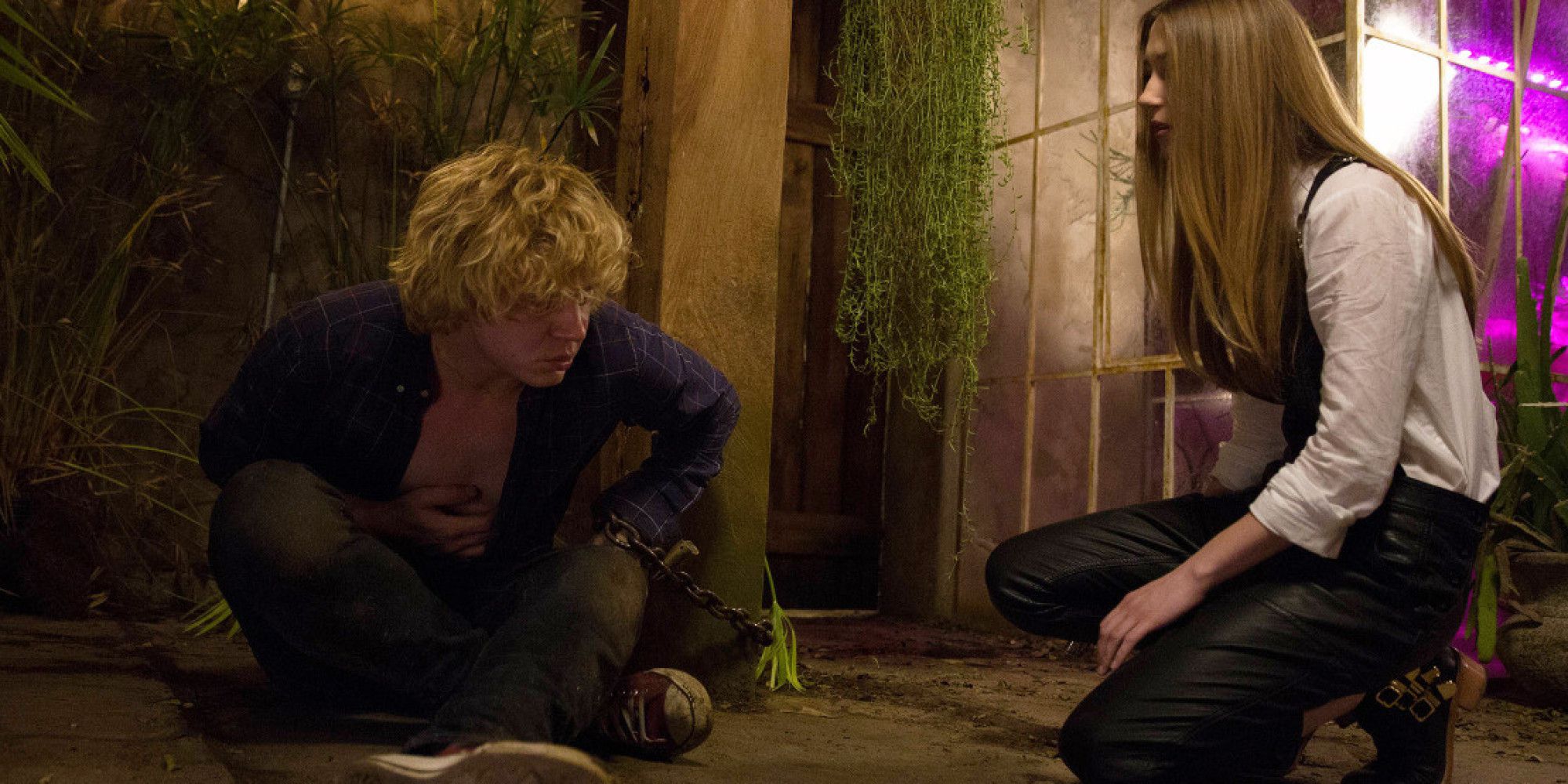 Viewers, particularly straight males, may have found themselves in the position of actively envying two dead men while watching this week’s episode of American Horror Story: Coven, because, to put it bluntly, several of the witches were feeling rather randy. It finally dawns on Zoe (Taissa Farmiga) that Kyle’s (Evan Peters) unique stature as a fully ambulatory quasi-corpse renders him the ideal method of circumventing the dangers of her potentially fatal mating habits, though it admittedly takes the newly revived Madison (Emma Roberts) to fully convince her of this fringe benefit. To be fair, Zoe’s had a lot on her mind this week, as she’s also plotting a coup with Cordelia (Sarah Paulson) to overthrow Fiona (Jessica Lange) as the head of the Coven.

The three-way that occurs near the end of the episode isn’t just thrown in by the show’s writers as a cheap turn-on; it also serves as an effective initiation of sorts for Zoe, who finally seems to be drawn into Coven’s primary dramatic arc regarding the brewing war between the white and black witches of present-day New Orleans. Zoe is a vicious avenger this week, particularly when she’s torturing and, eventually, murdering Spaulding (Denis O’Hare), after getting the loyal servant to confirm the truth in Cordelia’s visions of Fiona murdering Madison. Coven has been reliably offering viewers atrocities for seven weeks running now, but Zoe’s sudden plunging of a knife into Spaulding’s chest was, nevertheless, authentically unnerving.

That murder, however, didn’t even represent this week’s most startling act of will, as Zoe wasn’t the only young witch undergoing an emotional transition in the face of mythology-shattering truth. Queenie’s (Gabourey Sidibe) ostensibly blossoming friendship with Delphine LaLaurie (Kathy Bates) bore some troubling, thematically resonant fruit as well. So far, depending on the context, this subplot has waffled between operating as a subversive parody of racial odd-couple brotherhood clichés, and merely indulging them, but “The Dead” offers a bleak corrective to any potentially incoherent, pandering dissonances of the past. There’s a surprising moment between Queenie and Delphine where the two are gorging themselves on midnight fast food when Delphine matter-of-factly tells the witch that she’ll never be accepted as an equal in the otherwise all-white coven. Delphine’s utterance of this (in all probability, truthful) line, which is expertly tossed off by Bates, casually obliterates the logic of insulting entertainment that assures us that racial divides and past racially driven tragedies can be elided just because the white person finally deigns to acknowledge the black person’s humanity. It’s also a great refutation of the inadequacy of the new “post-racial” awareness with which middle-class Americans so smugly congratulate themselves for seemingly possessing.

This scene has the weird possibility of earning your affection for Delphine, because audiences love a recalcitrant sinner, and besides, we’ve never had to directly, intimately weather the pain of Delphine’s sins. This is why we’re shown yet another flashback that emphasizes the extent of Delphine’s cruelty, and even of her vulnerability, when she has a slave’s baby, fathered by her own husband, murdered. It’s an ambitious and complicated series of tones to navigate, and “The Dead” brings them off beautifully. We deeply feel Queenie’s divide of loyalties: between her senses of immediate loyalty to someone right in front of her and a more theoretical legacy of loyalty to her race. And Sidibe truly brings you into Queenie’s rattled, enraged psyche, earning the episode’s brutal and legitimately disturbing final scene.

A question: Did Zoe and Queenie turn on their superiors too quickly? At times, it almost feels as if we missed an episode or two of character emphasis and transition, but I’m inclined to say that the jarring plot turns work as indications of the emotional and physical extremities that are taking their respective tolls on the characters. Cordelia’s transformation, though afforded considerably less running time than Zoe and Queenie’s, is no less surprising, as she’s no longer a naïve princess, but a blunt, boozy upstart with eaten-away eyes that sometimes resemble a lizard’s, and, depending on the light, sometimes even evoke the woman on the most prominently known poster for Lucio Fulci’s The Psychic, which, considering Cordelia’s new abilities of advanced sight, may have been an intended homage.

“The Dead” also draws us deeper into Fiona’s needs and obsessions, confirming that a romantic foil, the second of the aforementioned enviable dead men, was a terrific idea. The Axeman (Danny Huston) should be a ludicrous creation even for this series, but Huston, an often underrated character actor, imbues the obsessive spirit with his characteristic suave hunger; his charisma is a match for Lange’s ever-amazing emotional sense of the paranoia and loneliness that probably reside at the bottom of all of this woman’s immoralities. These are two pros who understand that the stock of pathos goes down even better with just the right amount of hambone as seasoning. The moments between Fiona and the Axeman play like a horror film written by Tennessee Williams, rewritten by Jim Thompson, and then directed by a 1940s noir journeyman working at the top of his powers for mining all the usual erotic noir totems for all their porny resonance as symbols for tarnished dreams of an America that never existed. “The Dead” finds a good series edging toward greatness.

Review: Getting On: Season One