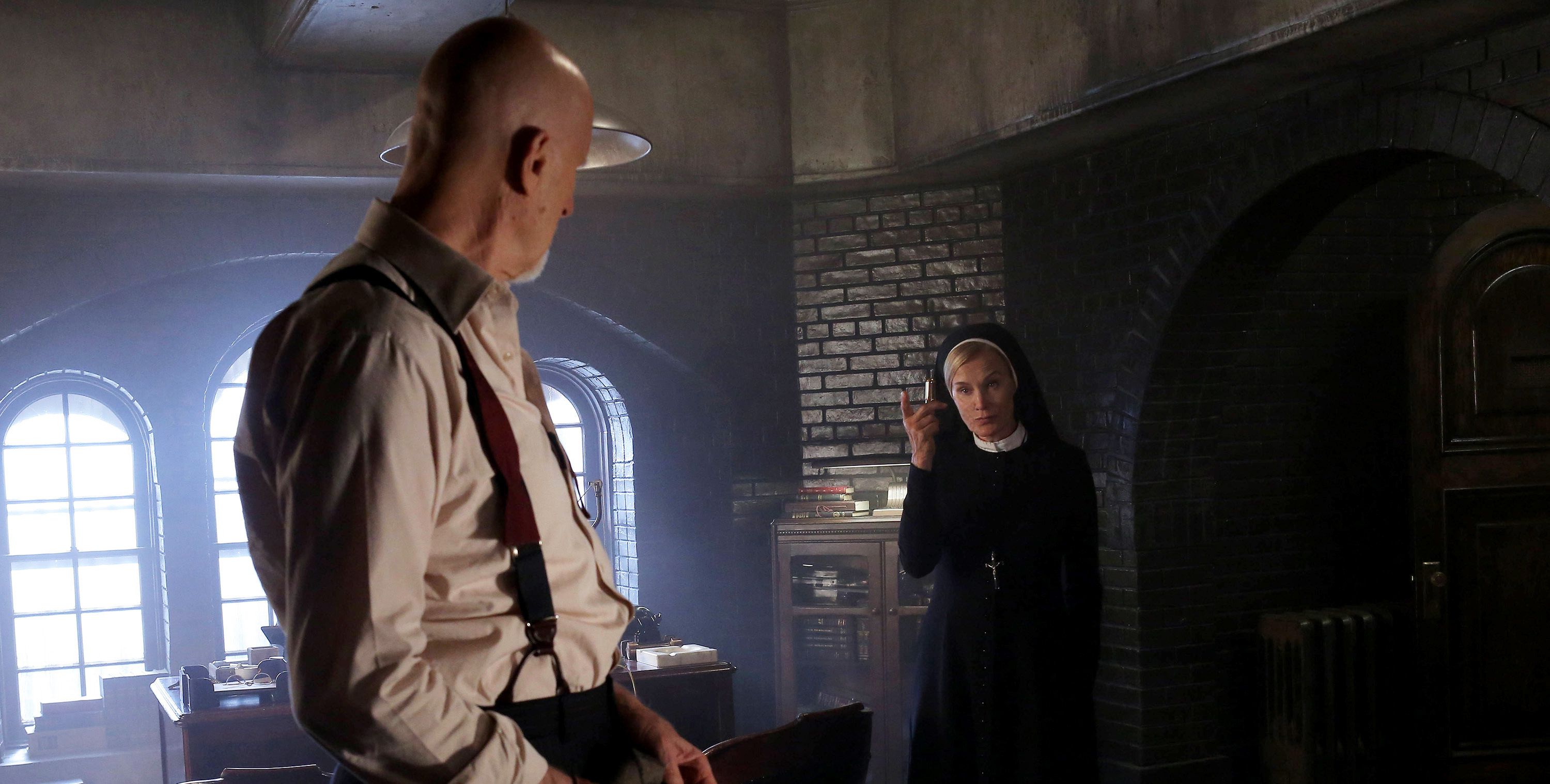 When it debuted last year, American Horror Story quickly established itself as a series determined to condense every subgenre of horror into 12 dizzying episodes of visual hyperbole, all brimming with an endless assault of style—and a dash of substance. In the second season of what was earlier this year revealed to be not an anthology, rather than an ongoing series, creators Ryan Murphy and Brad Falchuk continue the excess of messy kills and melodramatic monologues, but it’s decidedly more sinister. Leaving the haunted corridors of the Harmon family home behind, American Horror Story: Asylum shifts to Briarcliff Manor, a mental institution in 1964 that’s filled with crazies, aliens, mad scientists, demon-possessed teenagers, and masked men wielding bloody ice picks. It’s Ryan Murphy’s Law: Any and all terrors that can be squeezed into 45 minutes will be.

Asylum begins at the present-day Briarcliff Manor, now a sagging and dilapidated building, where sightseeing honeymooners (Adam Levine and Jenna Dewan-Tatum) are being hunted down by a killer. It’s exaggeratedly gory, manically edited, and both frightening and funny—a mix of pitch-black camp and horror that sets the tone for the rest of the season, which takes place during Briarcliff’s heyday, focusing on the battle for dominance waged between the overseers of the institution and patients who insist they aren’t insane. Familiar faces from season one return as patients: Evan Peters as Kit, an accused serial killer who claims aliens skinned his wife and several other women alive, and Sarah Paulson as Lana Winters, an investigative reporter committed to the asylum against her will for being a lesbian, trapped in the very institution she was trying to expose.

Overseeing of the madness is the stern and sadistic Sister Jude, played by scene-stealer Jessica Lange in deliciously theatrical manner. Lange was the highlight of the first season, playing meddling neighbor Constance Langdon, and she swallows this even meatier role whole. Sister Jude is a woman with a sordid past, suspicious of science, and firm in her belief that mental illness is a sin that must be beaten out of the human spirit. She’s also inclined to view everyone as her sworn enemy, nobody more so than Dr. Arthur (James Cromwell), hired by the church to make Briarcliff a leader in the medical treatment of the insane. Their rivalry is the story’s engine, affecting the movements and the motives of everyone around them. It’s a classic struggle: religion versus science, matriarchy versus patriarchy, crazy versus crazier. But there’s no clear winner, as each side is presented to be just as sinister as the other, which suggests that ultimately the struggle may be a pointless one. Sister Jude might be cruel, but Dr. Arthur is downright evil, getting his kicks by mutilating prostitutes and performing radical experiments on his mental patients, turning them into grotesque creatures with a taste for raw meat.

These creatures are heard but unseen in the early episodes of the season—a constant, creeping menace that makes Asylum more frightening than last season. Yes, the series is relatively campy, but there are equally moving moments. Paulson’s screams as her character undergoes shock therapy treatment for “lesbianism” are chilling, not because it’s the stuff of nightmares, but because it’s inspired by our frighteningly real history; the voyeuristic scene simultaneously titillates and implicates the viewer in her torture. Just as season one dealt with underlying themes of everyday human horrors (crumbling marriages, miscarriages, and depression) juxtaposed with supernatural ones, just beneath the surface, Asylum examines our societal horrors: sexism, racism, homophobia, religious guilt. This is a story of the downtrodden, the “freaks,” and those who don’t belong must figure out how to survive.

Murphy, who’s made a career out of capturing the stories of social outsiders on shows like Nip/Tuck, The New Normal, and Glee, does so here with a surprising degree of subtlety. The dark halls of Briarcliff Manor could be described as a grotesque version of Glee’s Prospect High School. Except here the “gleeks” are the psychopaths, and the campy musical numbers paying homage to songs of yesteryear are now campy sequences that pay homage to classic horror. But what sets Asylum apart from Glee is that its commentary on being “different” isn’t as broad, a feat for a series that’s excessive in every other respect. Still, the most interesting thing here is the show’s willingness to take risks: killing off major characters, running about 18 different plot lines at once, incorporating racy psycho-sexual and religious undertones (one vivid dream sequence features Sister Jude seducing a priest), asking more questions than it intends to answer. This lack of focus can sometimes result in sensory overload, as well as a sense that the series is never quite sure where it’s going, but it’s these risks that make it impossible not to get caught up in the show’s insanity.