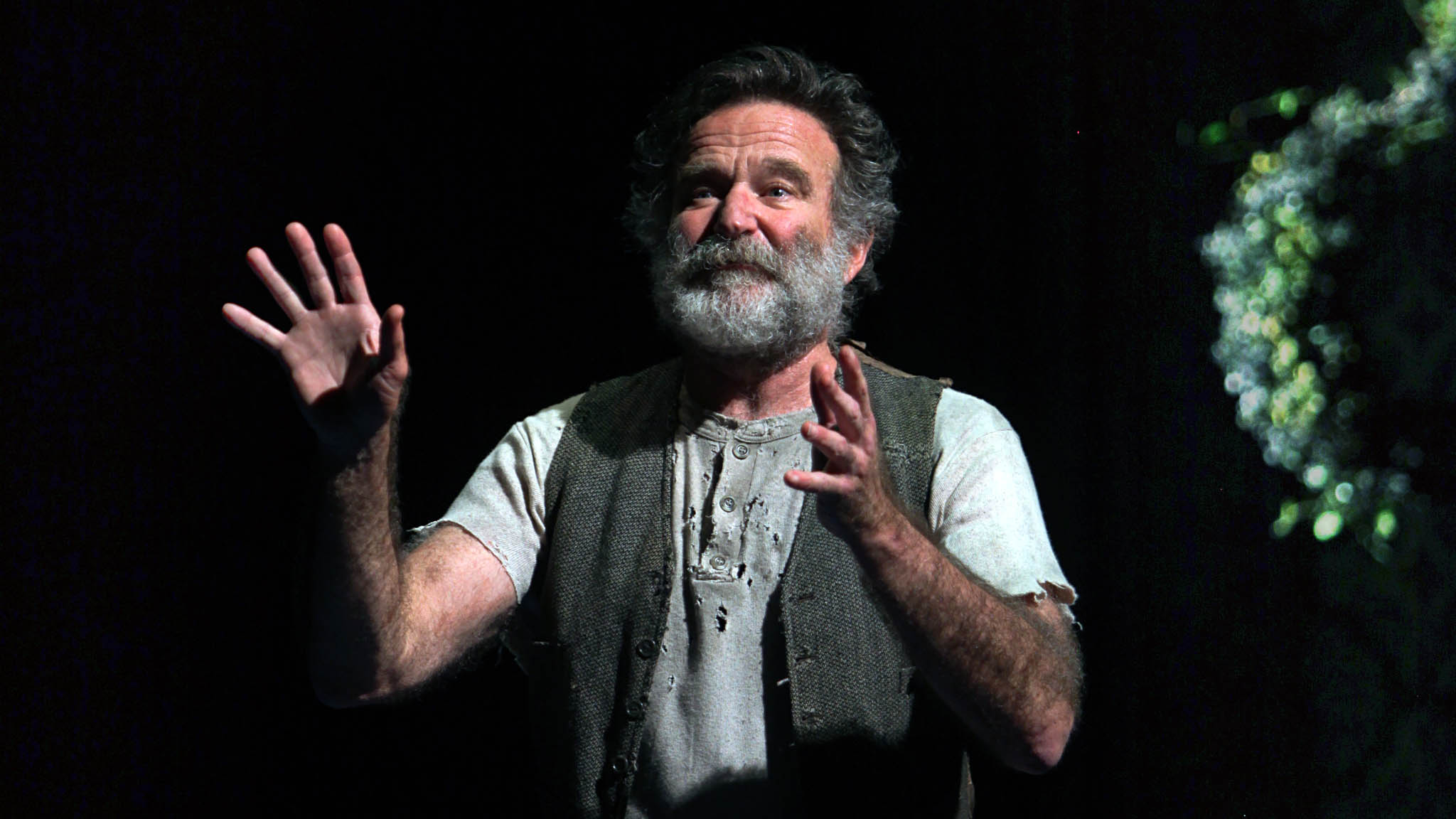 War is hell, but it has never left any modern writer dry for material, and with the endless, twisted, labyrinthine wars that continue to prop up all over the world, it provides enough mileage for keyboard-tappers everywhere. Both Bengal Tiger at the Baghdad Zoo and Clifford Chase’s Winkie offer skewered takes on global matters and are firmly a product of our grey, cynical times; it’s almost as if Jon Stewart were lurking somewhere in the background, ready to pounce if the right amount of canted slyness didn’t present itself. Oh, there’s lotsa yelling for effect too. Lots of it.

One of the more surprising takeaways of Moises Kaufman’s solidly crafted production of Rajiv Joseph’s Pulitzer finalist Bengal Tiger is that the yelling isn’t done by insurance provider Robin Williams as the title character. Actually, Williams’s casting is one of the more astute choices for this production. If you’ve ever had your stomach in knots over what showboating atrocity he’d pull off on some talk show or witnessed any five minutes of something like Patch Adams, you know that Williams can truly unleash the beast, and it ain’t always pretty. So in the opening scenes, when you see him pacing a cage, ready to pounce while extolling the sad existence of one of God’s creatures, his restraint is admirable and palpable, and his presence provides adequate tension.

The self-proclaimed “Dante in Hades” of the title prowls through Baghdad, weaving into the ghost-ridden tale of stunted and eventually maimed soldiers (Brad Fleischer and Glenn Davis) and a conscience-torn Iraqi gardener (Arian Moayed) who creates topiary animal sculptures (shades of Joseph’s earlier Animals Out of Paper), and not content to settle for mere cautionary tale, Joseph layers surrealism onto a seemingly realistic palette. Uday Hussein (Hirach Titizian) haunts the garden artist via macho taunts and carries the head of his brother in a bag. And eventually each character becomes haunted by another figure, until the living and the dead begin to coexist, Godot-like, in the deserts of the Middle East.

So yeah, which all makes this perfect for Broadway fare and time will tell if the Williams gamble pays off. But even though the cumulative effect falls short of stirring (the play ends up strangely muted despite so much going on) and some of the acting is not up to par (Fleischer’s Zoe Kazan-ish, moony, one-note portrayal of the more dim of the grunts will test your patience in particular), its ambitions do not go unnoticed. But they probably would have resonated more in a space about one-third the size of the nearly 1,500-seat Richard Rodgers, where the performers wouldn’t have to overexert to fill the large space, though Kaufman smartly scales the production accordingly, and the physical look of the show is appropriately catchy without gluttony settling in.

Godlight Theatre Company’s Winkie, adapted from Clifford Chase’s 2006 novel about a teddy bear undergoing a laborious trial for supposed acts of terrorism, could have used some of Kaufman’s judicious decision-making. Godlight is a terrific company with a great mission (adapting acclaimed books into sensory-filled one-acts), but satire really doesn’t seem to suit them. Their production begins at a fever pitch and never, ever seems to settle into an agreeable groove, despite some game performers and their usual panache with sound and lighting. But after about 20 minutes of the overemphatic pageantry passing for shrewd comic bite, you realize it has nowhere to go but down, which is why one should never (thanks, Spinal Tap) start at 11.

Lost and Found in Translation: Playwright Rajiv Joseph on Bengal Tiger at the Baghdad Zoo