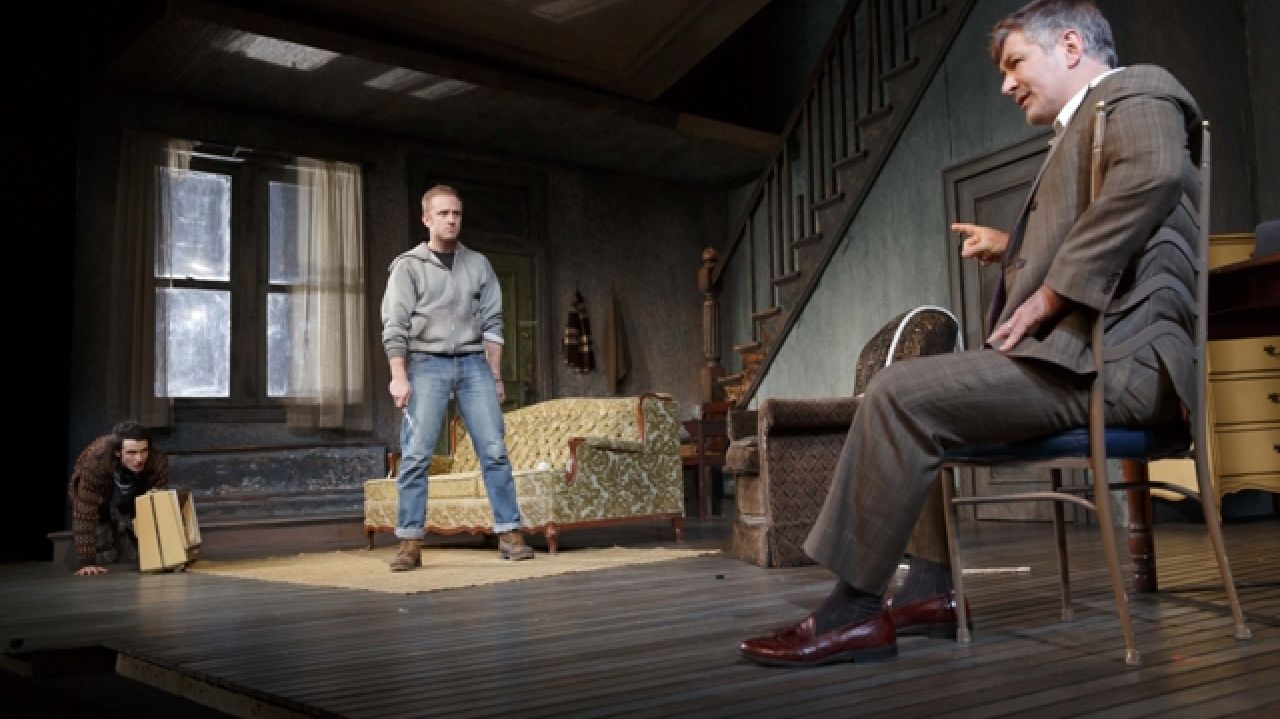 Lyle Kessler’s Orphans has got some major daddy issues. The playwright’s 30-year-old regional theater mainstay is the Field of Dreams of plays: Men go to laugh, whoop it up, and cry, wishing they could get a hug from Papa. The plot, as simple and primal as a fable, serves as a delivery system for sensations: Phillip and Treat have made it out of adolescence all on their own; Mom died and Dad ran off early on, and perhaps as a result, the brothers are mentally and emotionally stunted, respectively. Treat kidnaps Harold, a shady businessman, for ransom; after wriggling free, he stays on to domesticate the wild boys, but trouble follows him to his new home.

The piece should send you out zinging. Instead, the Broadway production’s big daddies, director Dan Sullivan and star Alec Baldwin, focus on providing smooth entertainment. That’s not nothing; it’s not even a small thing. But it keeps Kessler’s Orphans from living up to its potential. The opening moments, though, are amped for action: Set to Tom Kitt’s driving score, Tom Sturridge’s febrile Phillip caroms from the dilapidated banister to the ratty couch to the filthy windowsill in an exhilarating exhibition of indoor parkour. The physical derring-do has a stealth component, as if guided by a list of don’ts. He can relax only in the shadows, harboring forbidden fruits. It’s a scary jungle in here.

When big brother Treat (Ben Foster) arrives, he quickly establishes who’s ruler of the roost. It’s a nest without feathers in designer John Lee Beatty’s slightly skewed North Philly row house of cold comforts. Only a sliver of the domestic areas—darkened bedrooms above, kitchen to the side—can be seen. The unadorned living room and ceiling mirror the blunt force of Kessler’s writing. But Sullivan usually keeps the siblings far apart, which draws some of the energy out of a piece that thrives on the intensity of its connections.

That’s not to say the two actors aren’t firing on all cylinders. These roles must be a blast to play. Their lack of socialization demands they be etched in big, bold strokes. Sturridge flings his body and his heart around the stage with abandon, but he girds it all with a mastery that allows us to watch without keeping our fingers ready to dial 911. Foster has the hardest role and the biggest payoff: Treat needs to crave control so much he convinces Phillip that he’s allergic to the world outside their home, and the thug-in-the-making has to be so incapable of controlling his own violent impulses that he faints at the attempt. Foster’s Treat seems to have it a bit too together, but as a stage debut the performance is remarkable. He astutely builds toward a final shattering moment by creating a distinct physical vocabulary. In a wonderful acting trick, his Treat has a way of extending his hand, which ultimately stitches the ending to everything that’s come before.

Foster also deserves a hand for making his own mark. He famously replaced Shia LaBeouf during the play’s first week of rehearsal. Baldwin later reported there was concern LaBoeuf wouldn’t be able to give the same performance twice. LaBoeuf’s audition video demonstrates discipline, though his posting the other actors’ personal emails shows the opposite. Still, he delivers an hour of memorized material with riveting honesty. In the rehearsal room, though, the young actor went to extreme ends to shake things up, and that tried the patience of old hands Sullivan and Baldwin. But the desire to make something unpredictable and alive happen between these characters seems central to the effect of Kessler’s play, and sadly it’s missing from the production.

Baldwin, in particular, brings little variety or intensity. He goes instead for humor and sly warmth, which works for a while. Harold is, after all, a trickster. His first action is to escape from Treat’s binding rope with a Houdini-like finesse that endears him to Phillip. Baldwin’s delivery has a similar slipperiness. An orphan himself, Harold has effectively quelled his own inner Treat, but it would help to see the shiv-like edge he’s needed to succeed. He is, after all, making Treat into an enforcer, capable of moving up the lethal ladder of a wicked world. Baldwin’s softer approach isn’t enough to keep the narrative lines taut while he teaches the boys to be men. The domesticating process tilts unhelpfully toward domestic situation comedy, which makes the writing’s bracing simplicity seem thinly schematic and derivative.

The piece wears its paternal influences on its sleeve, combining the suspenseful mystery of early Pinter (the premise cribs from The Caretaker, which Kessler seems to acknowledge by naming the father figure Harold) with the rock n’ roll energy and mythic archetypes of early Sam Shepard. When done with full force, Orphans stands on its own as a punch to the gut. Most of the time, Sullivan and Baldwin are more content to give us playful slaps and a pull on the ear. In the last round, though, they knock you for a loop. You’ll leave relieved to know the kids are all right.

Orphans played its final Broadway performance at the Gerald Schoenfeld Theatre on May 19.

Live Wire: An Interview with The Comedy of Errors Star Hamish Linklater