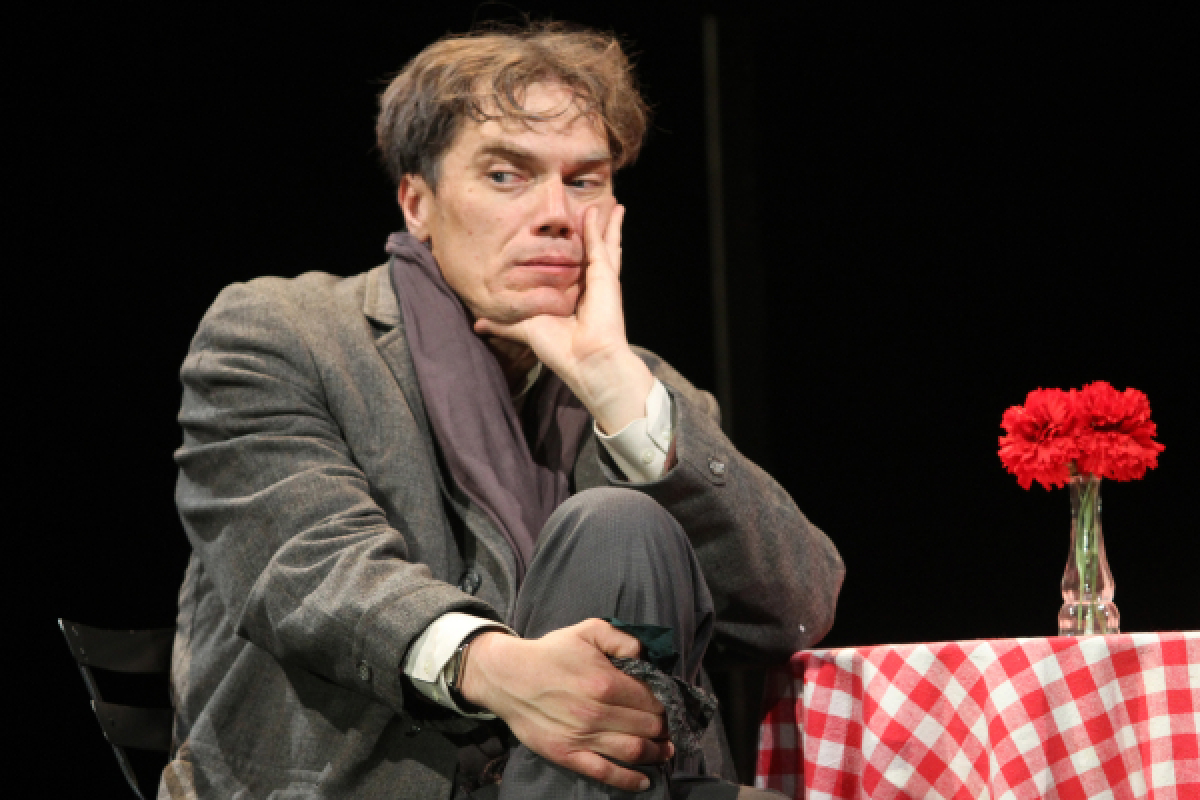 “What can you do?” The lesson of Eugène Ionesco’s play The Killer is summed up in its final words, spoken to a faceless, nameless murderer who offers no explanation for his deeds. This assertion of impotence at the conclusion of the play, newly translated by Michael Feingold and given a stunningly crisp production by director Darko Tresnjak, can feel tragically unsatisfying. But the play speaks directly to that gap between what we expect and what we receive out of life, and it finds in that distance a powerful lesson. As a crowning member of the mid-century French phenomenon dubbed (by a Brit) the “theatre of the absurd,” Ionesco once strove to teach us that expecting our plays to offer “meanings” that give “comfort” to our messed-up lives only distracts us from what life—and theater—really is, a never-ending confrontation with our mortality.

The Killer is an everyman play written to resemble a political parable. Berenger (Michael Shannon), a sensitive and well-meaning citizen, learns that the most beautiful corner of his city is being terrified by a serial murderer. All the facts are known about him, and yet the killer has yet to be stopped. Determined to do his “civic duty,” Berenger calls on the local authorities, but he’s told that solving the crime is no one’s “department.” What seems like a parody of a botched political system (the killer = gun violence, climate change, whatever you find it shocking that no one will fix) becomes, in the play’s final moments, a rebuke against even that idealism. We live, we try to make the world a better place, we fail, we die. Doesn’t mean we shouldn’t do it, but we shouldn’t confuse progress with Eden. Ionesco’s lesson is as true in 2014, and as hard to swallow, as it was when it was written in 1957.

Tresnjak’s production, remarkably, makes this dour lesson by turns funny and fanciful. With a smart comic ensemble and a spare but evocative scenic design by Suttirat Larlarb, this Killer has been handled with the delicacy of film in an old-fashioned darkroom. So treated, the play reveals a richness of texture that less capable hands would have obscured. A varied but nonetheless holistic musical score by Jane Shaw gives the characters’ zany actions a balletic precision, as though the whole play were a piece of music that has been playing, on loop, throughout human history.

Though the cast is uniformly strong, their performances work best as choreographed bits rather than three-dimensional human betrayals. This is by design, of course, but it’s why Shannon’s performance as Berenger doesn’t rank among the strongest. His hardened posture and angry temper weaken the innocence of his character, but more importantly, the sheer length of stage time means would force any actor to stretch a lieder into a symphony, and so Shannon falls flat. It’s only in his long, final monologue that he comes into his own, measuring the paces of Berenger’s slow collapse with a surprising virtuosity.

Kristine Nielsen and Paul Sparks, though, run away with the evening like a pair of vaudeville pros. As an underappreciated landlord and housekeeper, Nielsen yelps and spins and huffs and puffs like a supporting sitcom actor gunning for a spin-off (I’d give it to her!). Sparks, as Berenger’s sickly and vaguely sinister friend, has the precision and physical wit of a master clown, and his and Shannon’s bumbling search through Sparks’s oversized bag is first-rate farce.

It’s this combination of discipline, virtuosity, and wisely applied craftsmanship that makes Tresnjak’s Killer such a success. Critics have thus far been unkind to the production, suggesting that Ionesco’s untimely meditation has lost none of its capacity to discomfort in the half-century since it was first written. Nor, I would argue, has it lost its forcefulness.

The Killer runs at the Polonsky Shakespeare Center through June 29.

The Who & the What Interview with Ayad Akhtar