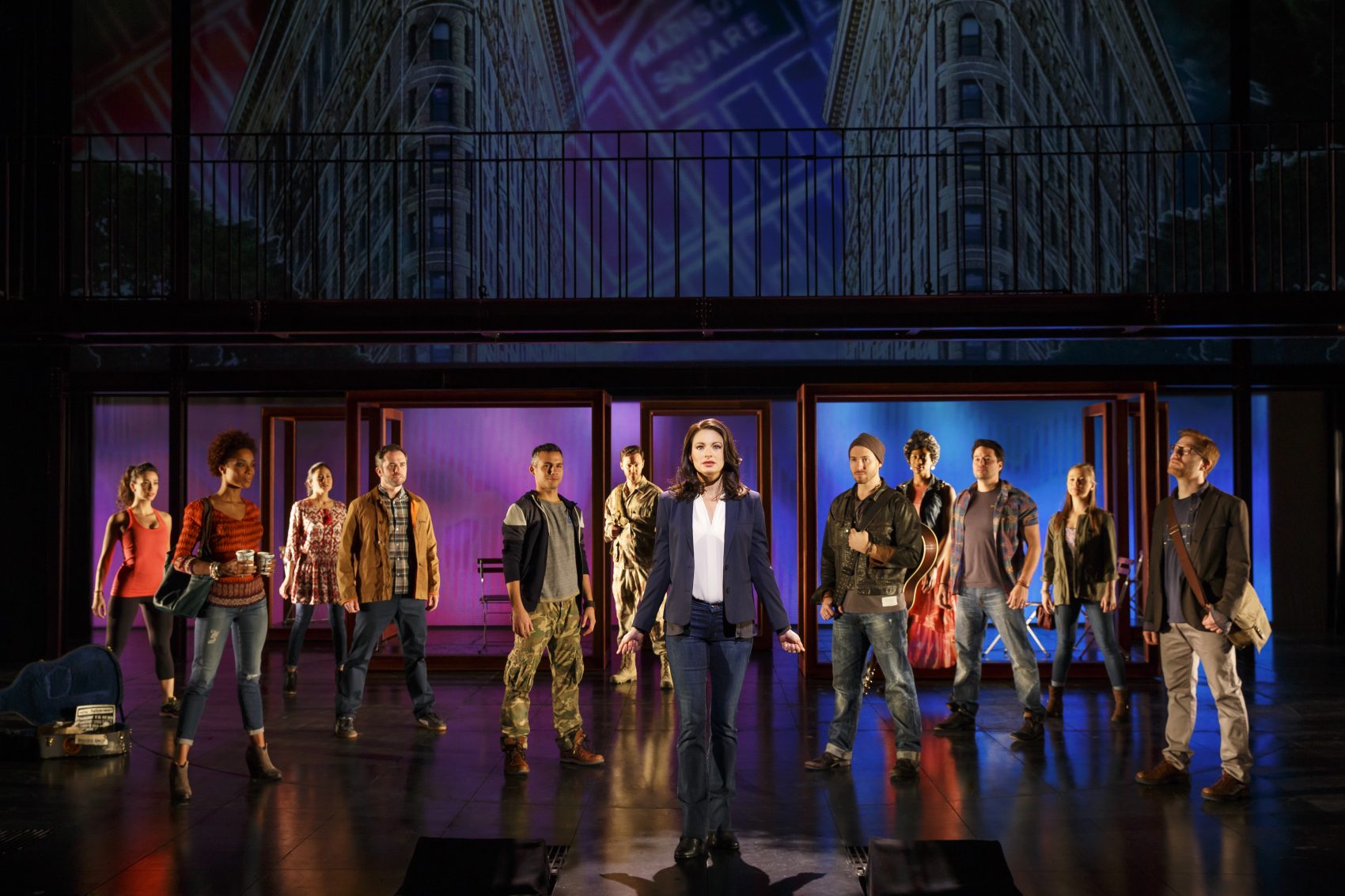 The newest Broadway musical by the writing and directing team behind Next to Normal, If/Then has all the emotional subtlety of a Nicholas Sparks novel. Despite its attempt to feel modern and urban in its depiction of sex, love, and work, composer Tom Kitt and lyricist/bookwriter Brian Yorkey’s love letter to New York City is written with the whitewashed romanticism of nostalgic affection. Nonetheless, the affection is catching, and the musical touches an emotional nerve that almost-but-not-quite excuses its flaws.

Set in a New York City that seems to be untouched by poverty, depression, dirt, or distrust, If/Then splits the life of Elizabeth (Idina Menzel) into two alternate universes. In one, she becomes a high-powered city planner who allows her ambition to keep her from finding love. In the other, she marries and rears two children while working as a professor. As Elizabeth’s parallel lives converge and overlap, the intended point becomes that life will hold its share of suffering, failure, success, and joy, no matter how much one wonders, “What if?”

If the moral seems overly familiar (“no day but today”), that’s because the production is a gentle homage to Rent, from Michael Greif’s direction to the pairing of Menzel and Anthony Rapp, who plays Elizabeth’s best friend and an ill-fated romantic match in one of her universes. At times the gimmick backfires, as the newer musical suffers in comparison to its predecessor. The cruelty of gentrification as depicted in Rent is replaced here by a clean, upper-middle-class New York for whom housing activism is a weekend pastime. Mark Wendland’s lush two-tiered set, though frequently beautiful with its evocations of blue sky and green grass amid a vibrant city, ultimately renders the Big Apple of real estate brochures. If this is Rent II, its subtitle is The Triumph of Benny.

The problem extends to Yorkey’s book and lyrics, which presume it’s dramatically interesting that Elizabeth’s life is too full possibilities. “Do I go there with Lucas, or stay here with Kate? Oh God, why do I do this—obsess and debate?” sings Elizabeth in the show’s unintentionally cloying opening scene. Once the story gets underway, Yorkey’s songs become more genuinely clever, but his book often moves too abruptly and its contrivances are too obvious to let its heroine feel like an everywoman. Kitt’s music has the same slick, slightly edgy style he used in Next to Normal, but without the high-stakes crisis at that musical’s center, the score’s energy and earnestness can feel forced.

This last problem dissipates late in the play’s second act, when enough genuine suffering has taken place (in the space of a startling two minutes) for the climactic number, “Always Starting Over,” to soar both emotionally and dramatically. Much of the credit, though, goes to Menzel, who singlehandedly brings more emotional truth than anyone on the creative team. Stripped of Elphaba’s green makeup and giant cape, Menzel’s return to Broadway is a fitting riposte to her performance in Wicked. Opening the show in a sudden spotlight with a quiet, “Hi, it’s me,” and denied a substantive ballad until well after intermission, Menzel’s patient and gentle performance shows she needs no pyrotechnics to light a fire on stage.

Her co-stars also inject both energy and tenderness into a musical that only sometimes deserves them. Rapp’s character is even more spineless than Rent’s Mark, yet his unapologetic performance is all the more sympathetic for not asking for the audience’s approval. A wildly under-utilized LaChanze, playing Elizabeth’s optimistic and emotionally fearless best friend/foil, beams onto the stage like a ray of midday sunshine. James Snyder, as Elizabeth’s too-perfect-to-be-real husband, is confident, charming, and beautifully voiced, if a bit too cookie-cutter to be exceptional.

If/Then, though, ultimately, belongs to Menzel. It’s been some time since an actress has enjoyed national recognition while remaining almost entirely identified with the Broadway musical. Like so many divas before her, she’s an unlikely star. Not instantly likeable or believable, slightly awkward and with a voice almost too big for her body, Menzel is at her best when she’s allowed to sink slowly into a role over the course of an evening, taming it by wrapping it around her like a thick blanket. Whatever blind romanticisms Kitt, Yorkey, and Greif have built into their vision of New York City, they all serve as a canvas for Menzel’s art. No wonder the musical feels the most honest when the lights finally dim to black, leaving only Menzel to sing in spotlight.

If/Then opened March 30 for an open-ended run at the Richard Rodgers Theatre.

The Velocity of Autumn Interview with Estelle Parsons