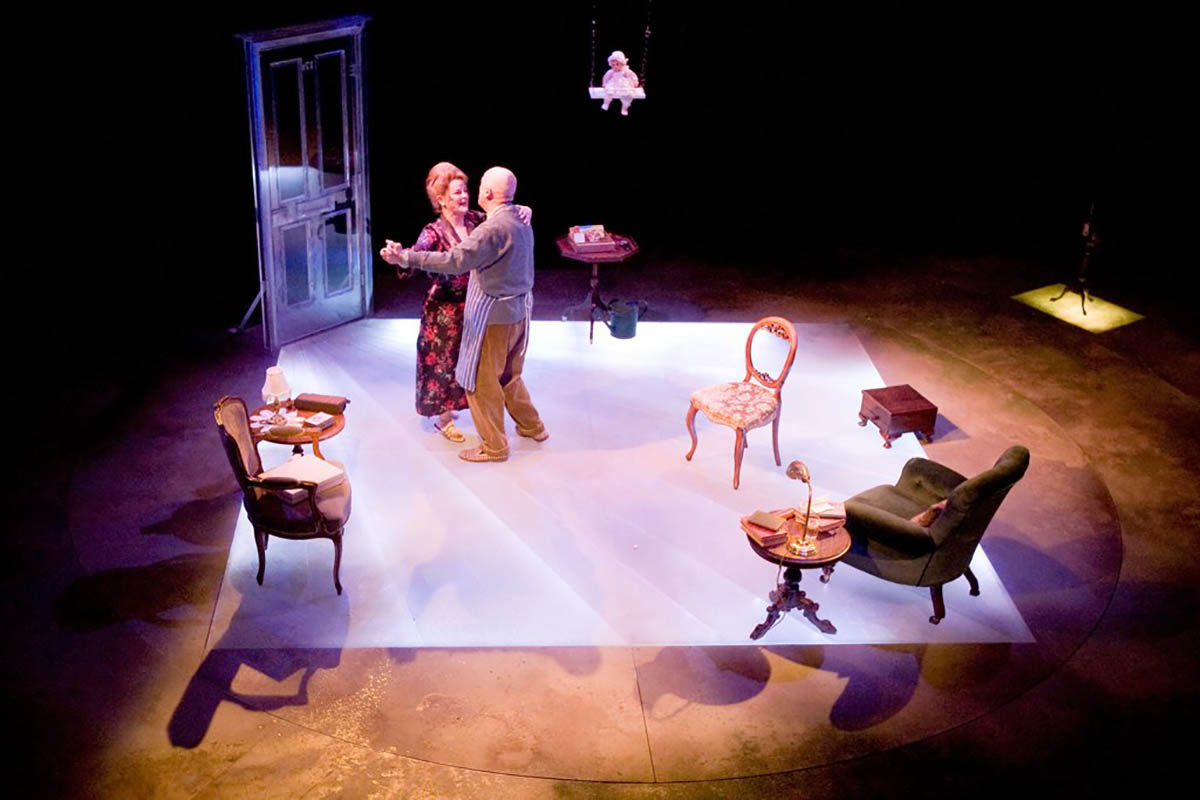 Both Eugene O’Neill and Edward Albee are explicitly invoked in domestic drama Haunted, but it quickly becomes evident that the latter was foremost on the mind of its playwright, Edna O’Brien. As Mr. and Mrs. Berry (Niall Buggy and Brenda Blethyn)—the British duo at the production’s center—sip Madeira, squabble, and recount times past (including a could-have-been baby which colors their tumultuous relationship), you firmly feel you’re in George & Marthaville, and that’s both a curse and a blessing to O’Brien’s uneven yet often arresting text.

It even has one half of a young couple to fulfill its Who’s Afraid of Virginia Woolf?-minded dissections. Young, lithe elocution instructor Hazel (Beth Cooke, winsome if a tad chilly) becomes Mr. Berry’s second life, her delicate beauty reawakening his aging spirit, enough to bellow Shakespeare to her and pawn off his wife’s clothing valuables. But Mr. Berry doesn’t seem to be all there: his mind wanders, there is discussion of growths in his pants (and not the desired ones), and his attachment to Hazel lacks an easy definition. Not quite sexual in nature, yet not quite innocent, Mr. Berry’s fixation with her, laced with his underlying sadness, opens up a wealth of past hurt, yet we—the spectators—have much of the duty of assigning the dramatic structure. The title isn’t evocative of ghost stories for nothing, and the fleeting details of this triangle begin to unwrap a few hidden mysteries even beyond the ones that are much more easy to peg.

Haunted might have benefited from more claustrophobic surroundings (59E59’s Theater A seems strangely too large for such an intimate story, and they have two smaller theaters just upstairs), and the split dynamic of kitchen-sink realism with poetic fancy never quite marries, though it’s hard to argue the vivid, literate pull of some of the passages (“We went to Versailles when we shouldn’t have…you couldn’t get enough of me…in those days”). Lucy Woodcock’s superb costumes magnificently bespeak a working-class Britain (and nobody pulls off blowsy broad attire quite like Blethyn), and Akintayo Akinbode’s moody original music helps create a suitably gothic mood, though Braham Murray’s production—transferred intact from a Manchester run last year—may be too stately for some American audiences. But whenever Blethyn, in blazing, balls-out glory mode, goes for the jugular (a manner that often brands her film performances as simply grating), the threat of slumber dissipates, and she’s finely aided by Buggy’s expressive, more quiet work; slowly, you begin to realize why this couple endured and why. And their push-pull chemistry is fiercely palpable; when the Tyrones of Long Day’s Journey Into Night are mentioned in passing, you instantly start to become a casting director in your head.

Toneelgroep Amsterdam’s Children of the Sun