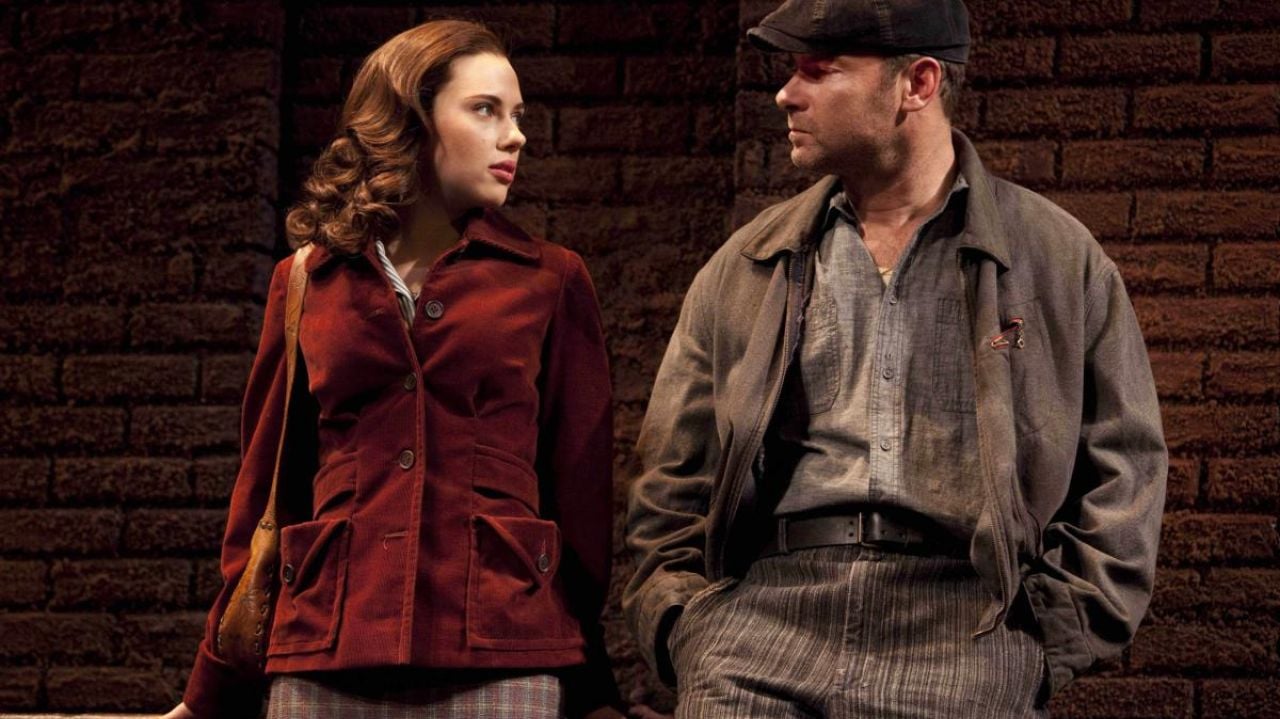 In a time when Broadway, like Hollywood, is all about bigger and flashier, spectacle over substance, avatars over actors, it’s a minor miracle that a throwback drama centered around a family of Italian immigrants in 1950s Red Hook, Brooklyn can even get staged. Sure, star power is essential, and it’s hard to imagine director Gregory Mosher’s riveting production of Arthur Miller’s A View from the Bridge landing at the Cort Theatre without names like Liev Schreiber and Scarlett Johansson attached. Yet it might just be the perfect show for these recessionary times: Mosher and his flawless crew seem to be doing twice the work with half the effort, and like the striving blue-collar characters they play, his hardworking cast takes nothing for granted, busting their collective ass to bring Miller’s work to life.

Not the easiest of tasks when one considers the heavy-handed melodrama at the heart of this sinister Greek tragedy. The plot revolves around longshoreman Eddie Carbone (Schreiber), whose near-incestuous love for his teenage niece, Catherine (Johansson), becomes a catalyst for destruction when Catherine falls for just-off-the-boat Rodolpho (Morgan Spector), who happens to be a cousin of Eddie’s wife Beatrice (Jessica Hecht, as a woman so strong she’s heartbreakingly fragile). That Eddie has generously and illegally welcomed both Rodolpho and his brother Marco (Corey Stoll) into his home turns the heat up that much more. And this is precisely where Mosher’s weight of experience grounds the piece with gravitas (the program notes that the director has “won every major American theatre award, including two Tonys,” in addition to having worked with Miller himself). For rather than amplifying the proceedings, Mosher brings his production down to the slowest of boils, creating a tightly wound suspense story that breaks from existential dread in the first half to violent anarchy in the second with the force of a slingshot.

But it’s still Miller’s timelessness with words that make the acting itself glide effortlessly. Eddie Carbone is Brooklyn’s own Archie Bunker, complete with one-liners as disturbing as they are hilarious, and at first glance, it would seem tall and handsome Schreiber is the wrong man for the job. But looks can be deceiving, especially when it comes to Schreiber, who has proven time and again that he’s the most underrated actor of his generation. As ticking bomb Eddie, Schreiber delivers a performance with laser-like focus, his mere presence on stage demanding an intense concentration from the rest of the terrific ensemble (even from Michael Cristofer, who plays the lawyer Alfieri, an extraneous narrator character, with an animalistic awareness). The adrenaline radiating from Schreiber is contagious and pushes his fellow actors up to his level, riding his energy like a wave.

It doesn’t hurt that Schreiber has that same unpredictability and raw physicality as Brando (what I wouldn’t give to see Schreiber as Stanley Kowalski). With eyes twitching and torso coiled, his body language speaks louder than Miller’s carefully chosen words. More importantly, he listens as intently as he acts, which happens to be the key to the show’s overall success. Every single actor who graces John Lee Beatty’s exquisitely nuanced tenement set (enhanced by sound and lighting design as invisible as the intricacies of daily life on the Red Hook docks) earnestly listens and is present each and every moment.

Especially Johansson, who’s so comfortable on stage it’s hard to believe this is her Broadway debut. As Catherine, a girl on the cusp of womanhood, Johansson’s own gangly awkwardness (one of many reasons Woody Allen adores her) is put to fine use. The cadence to her Brooklyn dialect is both believable and musical: “I learn something new about Catherine as well as myself as an actor everyday,” Johansson states in the Playbill interview. This ongoing process of discovery is highly apparent in her searing and searching performance.

As scene changes flow and sets move unobtrusively, the play’s pacing and timing stays painfully right up until the still-shocking ending. With both costumes and Brooklyn accents equally understated, Mosher has slipped his entire production into the “role” of mid-‘50s Red Hook, allowing the audience to become enveloped, not distanced. By the time of the curtain call, we thoroughly understand why Schreiber and Johansson appear so shaken and drained. They’ve actually been living those parts for the past couple of hours—as evidenced by the fact that they walked arm in arm into the wings, with Schreiber giving Johansson a paternal pat on the back. Eddie Carbone has left the stage but has yet to be exorcised.

A View from the Bridge is now playing at the Cort Theater in New York City.