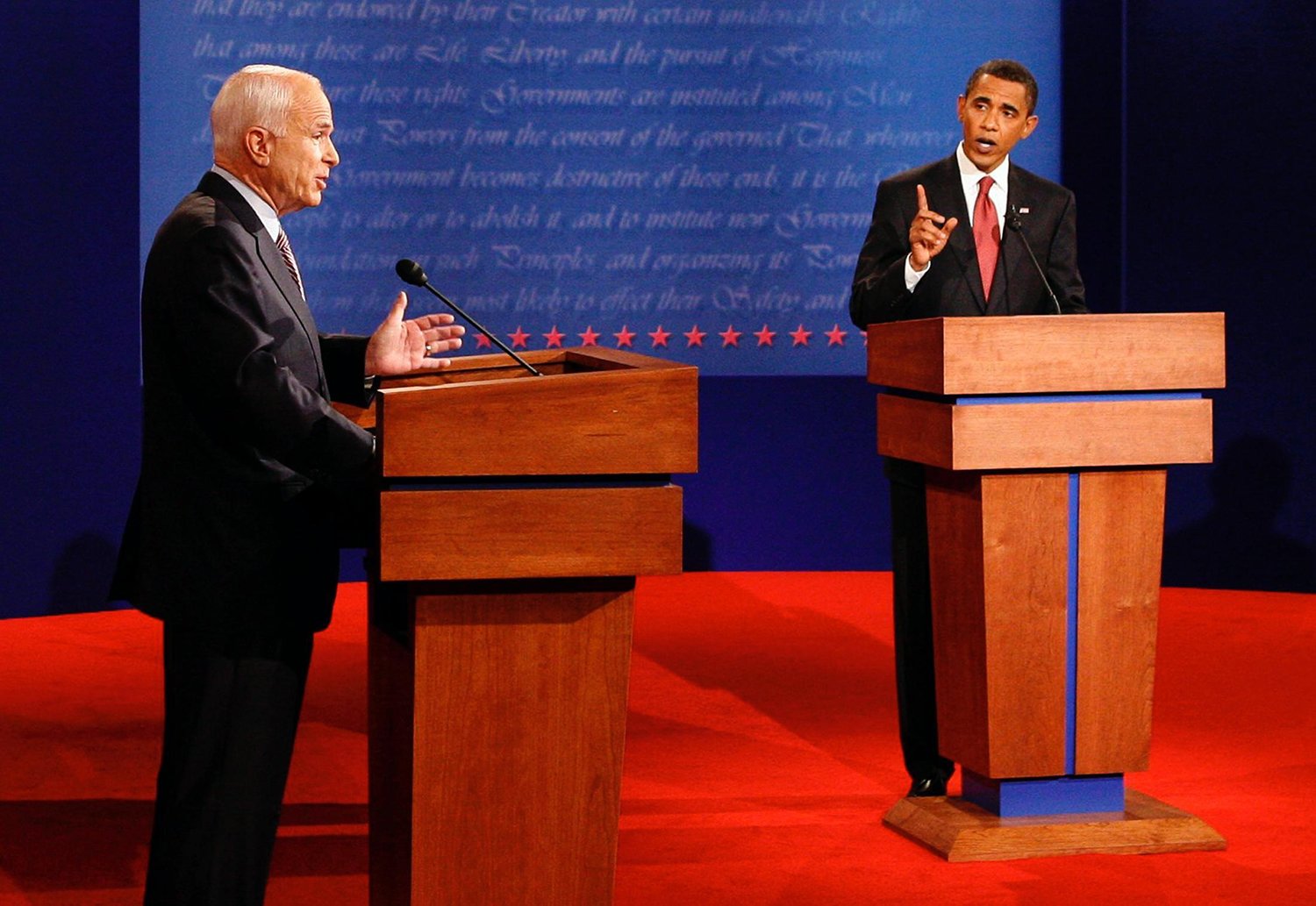 As evidenced by the repugnant “tribute” to the victims of 9/11 at their national convention earlier this month, exploitation has become a cornerstone of the Republican platform in the last seven years. Evoking U.S. troops and claiming that theirs is the party of patriotism has become the standard Republican tack when faced with any kind of political adversity, and John McCain continued that tradition at the first presidential debate last night. When Barack Obama questioned McCain’s temperament, lambasting the Republican nominee for cavalierly singing about bombing Iran and threatening the extinction of North Korea, McCain’s immediate response was a thinly veiled anecdote about being given a bracelet from the mother of a fallen U.S. soldier. Democrats have routinely failed to deflect or challenge these manipulative appeals to voters’ emotions and fears—that is, until Obama rebutted with the grace and skill of a prizefighter: “I have a bracelet too.” It was a proud declaration that was a whole lot more than just a statement about who has the fancier bling; it was a direct disavowal of one of the vilest, most cynical political tactics.

Following the week he’s had, McCain scored a victory last night simply by not fumbling on the economic issues and navigating the conversation toward the domestic topics with which he’s most comfortable: taxes and earmarks. The economy should be, by default, the Democratic candidate’s strength in 2008, but in a surprising reversal, where Obama truly excelled was at foreign policy—by all accounts McCain’s strong suit. Despite McCain’s attempt to paint Obama as ignorant or naïve (he said the Illinois senator “doesn’t understand” a whopping seven times), Obama displayed a firm grasp of the issues and presented a clear alternative to both the Bush Doctrine and McCain’s nearly identical hawkish positions, even agreeing with McCain on several occasions—rendering Mac’s premeditated plan of attack an oblique condemnation of his very own views. Obama went straight for the jugular, not only questioning McCain’s temperament, but his judgment on the decision to invade Iraq, looking directly at him and repeatedly saying, “You were wrong.”

McCain continued his campaign’s strategy of flagrantly misrepresenting Obama’s positions, most egregiously during an exchange where he deliberately tried to miscast Obama’s use of the word “preconditions” in the minds of voters, indignantly talking over both his opponent and moderator Jim Lehrer when corrected on the issue. McCain awkwardly boasted of his status as a maverick in the Senate and seemed dismissive, even contemptuous, of Obama, sneering and never once looking him in the eye. The viable candidacy of someone who represents a new, post-racial generation is a direct affront to the Washington establishment that McCain has long been a part of, and perhaps sharing a stage with Obama—at a debate McCain clearly tried to avoid—was difficult for the good ol’ boy to swallow. It’s this same air of superiority and condescension, this apparent sense of entitlement of power that is inherent in the delusion that he and his party have a monopoly on patriotism, strength and morality. “I have a bracelet too,” Obama said, and “I am an American too” is what he meant.

The First Presidential Debate: To Have the Room

The First Presidential Debate: The Components of Attitude