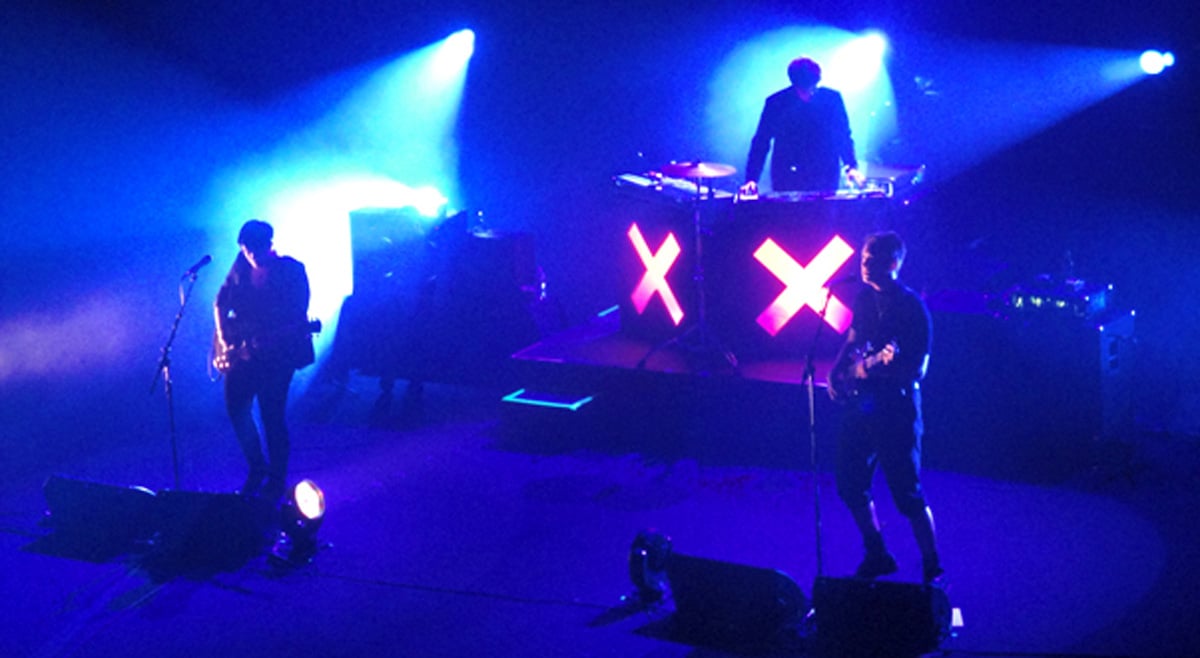 Like their self-titled debut, the xx’s live show is a case study in straddling a fine line: completely self-possessed but never haughty, romantic without being gushing, darkly mysterious but without melodrama. The London trio brandished their simple set at Philadelphia’s Merriam Theater with few pauses, slightly jumbling their album playlist and breaking only for a simple, barely audible “Thank you.” But the quiet, almost meek players regularly belied the power of their indie-meets-R&B sound. Cavernous, throbbing, and deceptively muscular, the xx’s music is already famed for how it evokes simplicity without being simplistic, and that quality is quite literally amplified in a live setting.

The appropriately titled “Intro” opened up the show with furious drumming across all instruments, as even the usually gentle Romy Madley Croft pounded at her guitar raucously amid the jungle percussion. With nary an actual drum in the lineup save for a lonely, singular cymbal, it’s a wonder the xx can force so much power out of two diminutive drumpads and a few sequencers. Yet the brief setlist (roughly 12 songs in all) never lacked for volume or force, as a quick jump into “Heart Skipped a Beat” sent a thump-thump-clap beat resonating throughout the theater. As a pointed contrast, both Croft and co-vocalist Oliver Sim are passive behind the mic, often satisfied with letting their chilled-out paeans to one another float beneath the crisp snap of an electronic accompaniment.

That mix of brisk guitar-drum combinations and slurred, barely enunciated vocals proves surprisingly effective up close. A piece like “Fantasy,” somewhat thin and reserved on record, becomes a billowing cloud of vibration and ambience live: Sim glides along by himself for a while, singing melancholically of collisions and blooms, until yielding the floor to Croft’s Edge-like guitar arpeggios and percussionist Jamie Smith’s booming pads. Its counterpart, “Shelter,” features Croft doing her best Tracey Thorn impression and no more than a few well-placed synth surges and swells.

The xx proved just as sparse with a quartet of better-known tracks: The crowd-pleasing “VCR,” “Basic Space,” “Crystalised,” and “Islands” were shot out in quick concession, savored breathlessly by an excitable crowd. Yet the band never truly lingered or dwelled on some drawn-out conclusion. Indeed, when not segueing quickly into another direction, the xx ended abruptly, reaching moderate self-indulgence only twice on covers of Filipino R&B star Kyla’s “Do You Mind?” and Womack & Womack’s 1988 single “Teardrops.” And so the band exited the stage with little fanfare and no encore, having delivered a quick, solid jab to the senses. And yet, for all their brevity, the gorgeous, unfeigned xx commanded their listeners’ attention long after the night had expired.

Review: Antony and the Johnsons, Swanlights