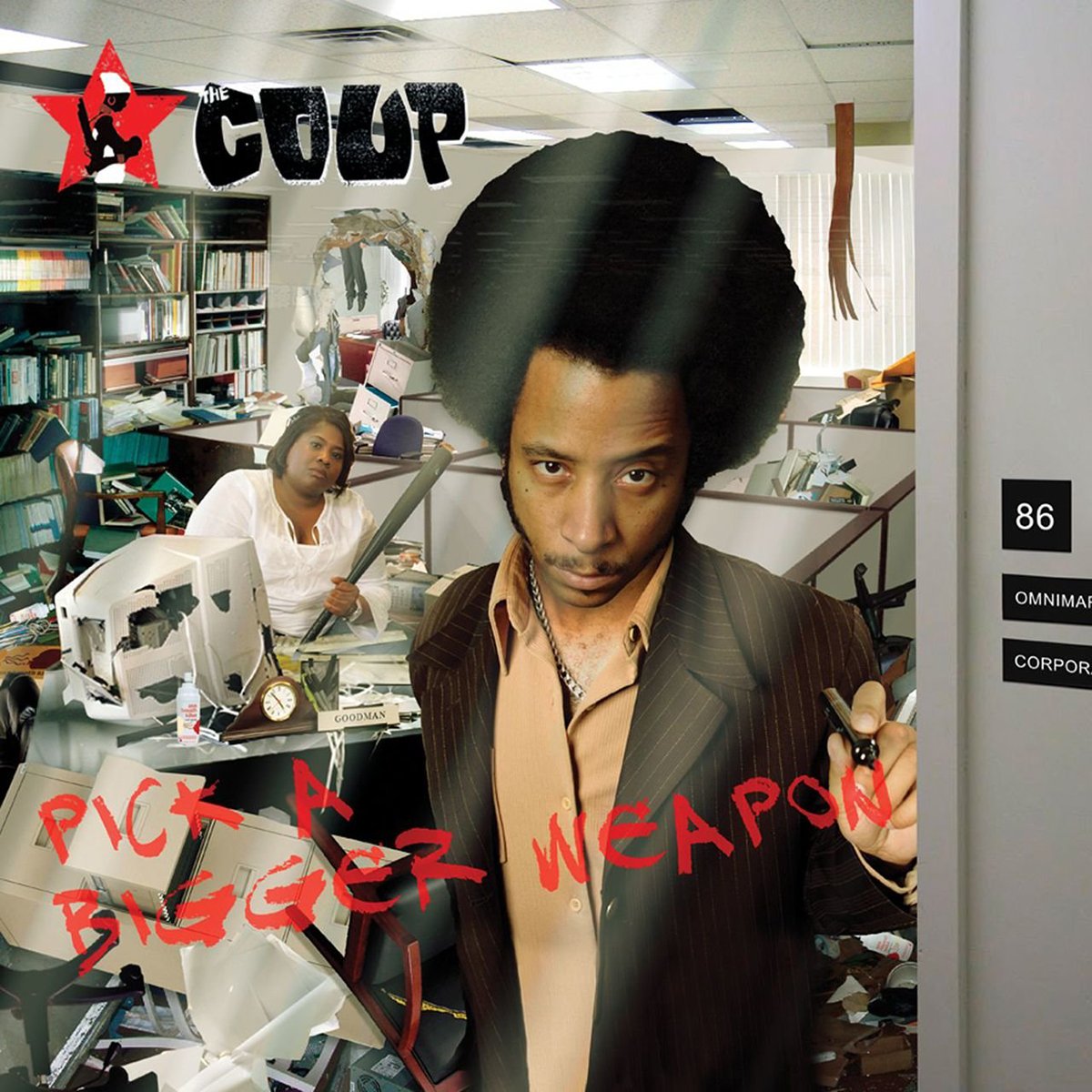 Few artists in the annals of popular music have the poor fortune of the Coup. Although well received by critics, Boots Riley’s left-leaning hip-hop outfit always ends up in the wrong place at the wrong time: Their early efforts harkened to the funky political awareness of Boogie Down Productions, but 1993’s Kill My Landlord sunk like a stone during the Year Gangsta Broke, and Party Music, the Coup’s don’t-call-it-a-comeback album of 2001, had the spectacularly poor foresight to depict the group blowing up the World Trade Center on the record’s cover. The cover to the Coup’s new record Pick a Bigger Weapon depicts Riley and DJ Pam the Funkstress demolishing the interior of an office building with baseball bats and magic markers. Are these really “bigger” weapons than Party Music’s explosives?

Pick a Bigger Weapon is out on Epitaph, and while releasing a provocative hip-hop record on a label normally associated with California punk rockers is acting globally (or nationally, anyway), the Coup can’t decide whether or not they should be thinking locally. Riley’s lyrical prescription lacks focus—is he encouraging his audience to respond with violence and “take the safety off and blast,” form a union (“Get That Monkey Off Your Back”), shoplift (“I Love Boosters”), or respond lackadaisically to the problems at hand? The catchiest song, “Laugh/Love/Fuck,” suggests a laissez-faire response to the problems of the world: “I’m here to laugh, love, fuck, and drink liquor/And maybe make a revolution.” Pick a Bigger Weapon is by no means a bad hip-hop album, but it is certainly—and this could be the Coup’s toughest criticism of all—a harmless one.

Pick a Bigger Weapon features guest spots from Talib Kweli, Black Thought, and a few has-been radical rockers like Jello Biafra and Tom Morello. But it’s OutKast’s André 3000 who makes the strongest impression—and he never appears on the record. Riley name drops “Bombs Over Baghdad” on the sophomoric “Head (Of State),” a track which regrettably features the chorus “Bush and Hussein together in bed/Giving H.E.A.D. head!,” and affects Dre’s Southern drawl throughout most of the album. The problem is not the Coup’s OutKast influence, but that the comparison illuminates Riley’s significantly weaker flow. His lyrics are simultaneously clever and uninteresting: he rarely transcends an ABAB or AABB rhyme scheme, practically never rhymes within the lines, and his meter and diction lack intricacy.

Unlike the Dead Kennedys or Rage Against the Machine or most angry, oppression-fighting rap outfits, the Coup likes to occasionally slow it down and sleaze it up a la Sly Stone or Isaac Hayes. I wouldn’t go so far as to describe the slow-jams “IjusWannaLayAroundAllDayInBedWithYou” or “BabyLet’sHaveABabyBeforeBushDoSomethin’Crazy” as sexy, but they add a much-needed shift in tone from the album’s more predictable anti-corporate tirades. And while Pam the Funkstress’s beats are nothing special, the Coup utilizes other instrumentation with great skill. The album’s best song, “ShoYoAss,” features Dirty Mind-esque synthesizers and clavinets, resulting in a perfect dance track bubbling over with riot-inducing rage. Even aside from Neil Young’s subtlety-be-damned “Impeach The President” and Springsteen’s album-length tribute to Pete Seeger, protest songs have not generated so much public interest since the 1960s. But if the old adage that once you free your ass your mind will follow is true, it’s Riley’s responsibility as a competent but not-quite-exceptional MC to give his listeners a little more to think about.