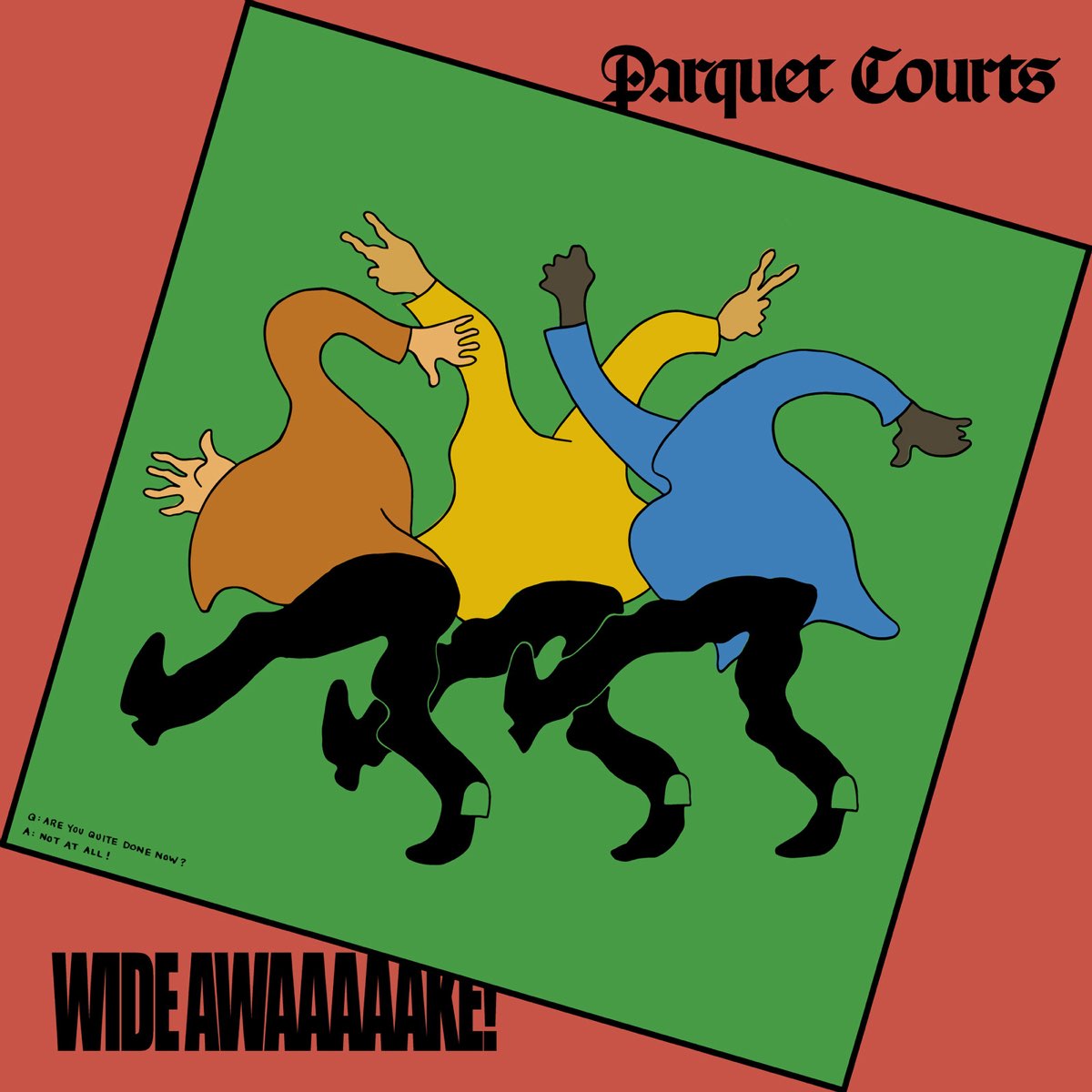 Described by Austin Brown as a response to the nihilism born out of our current “hateful era of culture,” Parquet Courts’s sixth album, Wide Awake!, tackles such heavy subject matter as climate change, political corruption, government propaganda, gun violence, and police brutality. Though the Brooklyn post-punk quartet’s songwriting remains prone to tangents, the argument on “Total Football” that “collectivism and autonomy are not mutually exclusive”—a theme that crops up throughout the album—marks a significant thematic progression from hazily “debating Swedish Fish, roasted peanuts, or licorice” on 2012’s “Stoned and Starving.”

Produced by Danger Mouse, Wide Awake! adds pop polish to Parquet Courts’s usual lo-fi approach, and it ramps up the band’s sneering punk and anti-establishment sensibilities. While 2016’s Human Performance was largely composed of wistful, contemplative ballads that tapped into the aesthetic of influences like the Velvet Underground, Wide Awake! draws from a more eclectic sonic palette: “Before the Water Gets Too High” incorporates a loping reggae beat; sunny, Beach Boys-esque vocal harmonies ripple through the psych-rock-tinged “Mardi Gras Beads”; “Freebird II,” which is infused with a grimy rock organ, harks back to the classic-rock era; and the title track’s funky percussion and nimble basslines draw from modern dance-punk.

Parquet Courts treats both figurative and literal forward motion as a cathartic act that allows one to shake free from the paralyzing grip of inertia. “Are you put off by our footloose fluidity?” Andrew Savage asks on “Total Football” while framing human beings as “conductors of sound, heat, and energy.” On the raucous anthem “Almost Had to Start a Fight/In and Out of Patience,” he sings desperately about resisting the societal conditioning that promotes the status quo, while on “Violence,” he points to mass shootings as a deep-seated symptom of a nation built on state-sanctioned bloodshed.

Though Savage rattles off a sprawling, rapid-fire litany of socio-political ills throughout Wide Awake!, the musician delivers his proclamations with occasional dashes of absurdist levity, avoiding outright pontification. And the album is at its most intriguing when the band casts a more critical eye toward their own perceptions. On “Normalize,” Savage suspects he’s simply part of a deceptive “prefab experience” while doubting whether he’s even capable of independent thought: “Lately I’ve been curious/Do I pass the Turing test.”

By taking a more collectivist worldview than they did in their early work, Parquet Courts does more than simply call bullshit on the powers that be. With Danger Mouse’s help, the band has crafted a diverse and intrepid album, stepping out of their comfort zone musically while also exuding a trenchant political posture. Though Savage decries the innumerable times he’s been “outdone by nihilism” on “Tenderness,” it’s clear that the band believes in the transformative power of resistance in the face of a corrosive culture that often mistakes vitriol for virtue and gives credence to the loudest voices.

Review: Courtney Barnett, Tell Me How You Really Feel