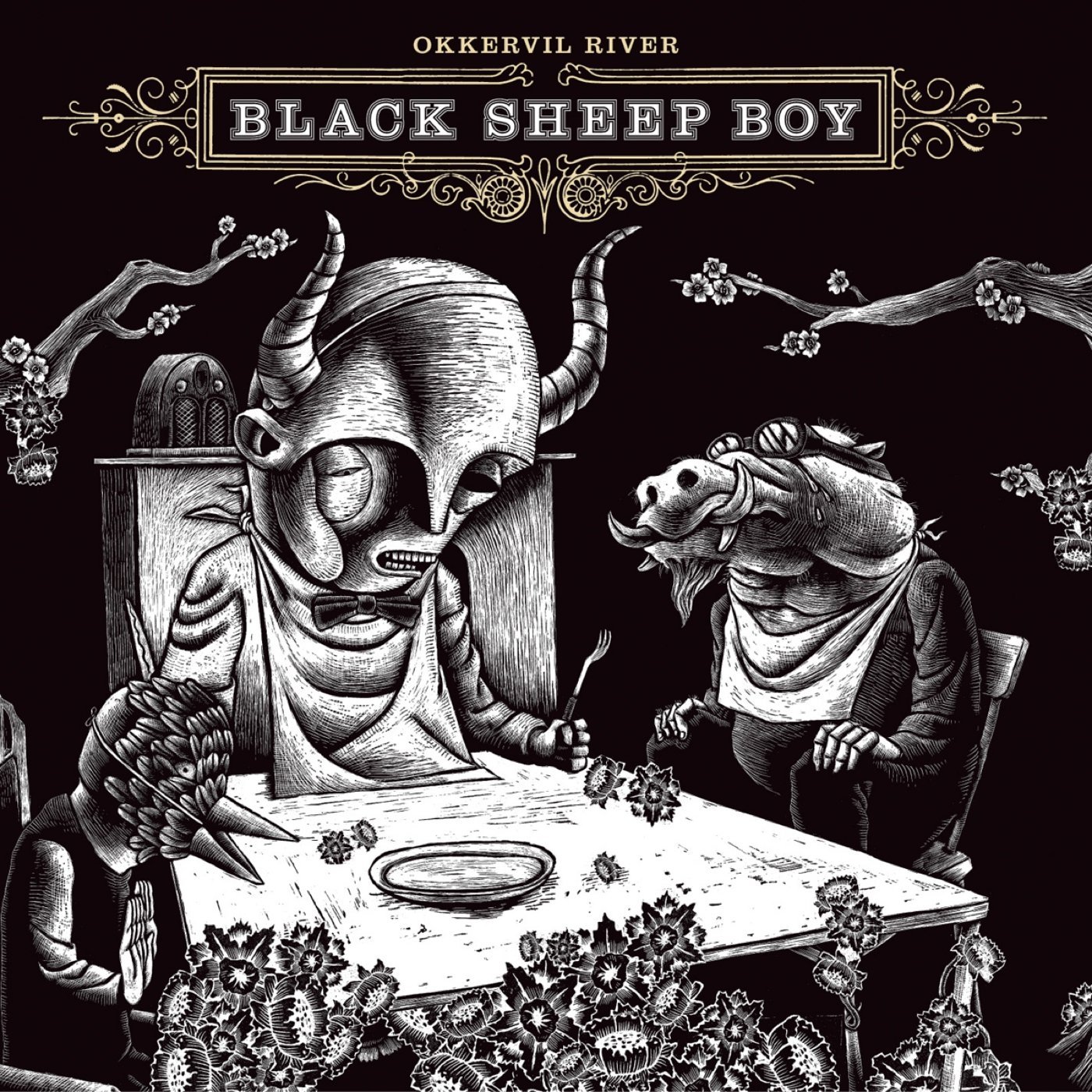 With CD sales plummeting and labels hyping ringtones like they used to push singles, it’s refreshing to see that Okkervil River has so much faith in the album as a medium that they’re releasing a “definitive edition” of 2005’s Black Sheep Boy. In this case, “definitive” means a two-disc set made up of the original album (disc one), the EP Black Sheep Boy Appendix and the b-side “The Next Four Months” (disc two), plus some multimedia goodies. I couldn’t get the videos to work on my computer, but I’m guessing they’re pretty neat given the band’s taste for visuals. William Schaff’s album art on the Black Sheep Boy records is some of the best I’ve ever seen—elaborate wood-cut-style prints that are a terrifying blend of Edward Gorey and Terry Gilliam’s work for Monty Python. If every CD had inlay art this wonderful, internet piracy would be a moot issue.

Schaff’s work aside, Black Sheep Boy is well worth owning. Okkervil River’s sort-of-obvious-not-really mesh of emo and confessional country and folk is fully realized on the original full-length album. Songwriter Will Sheff lays his (or his characters’) soul bare with wordy tomes that generally relate existential or romantic anguish to particularly violent deaths. Sheff is not a subtle lyricist, but he’s a gifted one—his images are precise (“This room, unlit, unheated, and the ceiling striped and the dark black blinds”) and he’s a whiz at alliteration and euphony, such as on “The Latest Toughs,” where he unravels “To feel their feelings flash and finally fade away in one fabulous and fiery display” without sounding too ridiculous. And the album’s narrative conceit is bold: Black Sheep Boy and its appendix/sequel craft its storyline as a continuation of the Tim Hardin song of same name. Anxiety of influence be damned!

The songs on Black Sheep Boy are lovely and/or brutal. “For Real” is a Pixies-esque exploration of dynamics—and a truly great rock song—that shifts from a muted guitar to a thrashing one within a breath. “Black” and “Latest Toughs” are Casio and Wurlitzer-driven pop songs that, aside from Sheff’s phlegmy croak, wouldn’t sound out of place on a New Pornographers album. Among the album’s several moody ballads, the closer “A Glow” sticks out as an Americana spin on Joy Division. To say there’s a hint of Scott Walker or Leonard Cohen may be gushy, but not inaccurate. Two years later, Black Sheep Boy still impresses, and probably stands as Jagjaguwar’s best release.

The Appendix opens with the way-too-dour (even for Okkervil River) “Missing Children,” and its tune is revisited for the interlude “A Garden” and the stomp “Last Love Song For Now.” Another interlude, “A Forest,” takes its melody from the LP’s “In A Radio Song.” So that leaves, basically, three songs: the spectacular “No Key, No Plan,” the inessential “Another Radio Song,” and the so-so “Black Sheep Boy #4.” Even including the b-side “The Next Four Months,” that’s a lot of track-skipping for a disc that’s under 30 minutes.

Reissues aren’t just for the canon anymore, and since there aren’t even any new tracks on this “definitive edition,” the new Black Sheep Boy seems head-scratchingly unnecessary—the un-definitive edition and its sister EP are both still in print, and the original CD costs the same as the double-disc reissue. Is anybody making money on this arrangement, or am I missing something here? Of course, now I’m not missing anything that’s Black Sheep Boy-related—I’ve actually got about half of an EP more than I need. But Black Sheep Boy is nearing classic status, at least as far as emo concept albums based on old folk songs are concerned, so that’s not a bad burden to have to bear.

Review: The Ponys, Turn The Lights Out